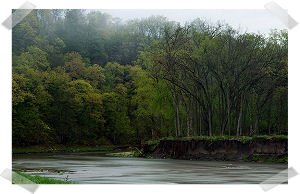 In early May, a buddy of mine and I set out for five days and 140 miles on the Upper Iowa. We launched from the Highway 56 bridge in Leroy, Minnesota. The river at this point is more of a creek. I don't recommend the section between Leroy and Chester, Iowa, particularly the first five miles. Unless the water is fairly high, dont even consider it. Although this chunk is an adventure--we had to drag the canoe over numerous logs jams, in some instances portaging, and a few times we pulled out my camp saw (that I had nearly left at home) to saw passages through downed trees that blocked the river.

The first night we camped at Lidtke Mill County Park near Lime Springs, a nice place with a large, lush green lawn dotted with massive cottonwoods. There is even a concrete block building with running water and, get ready, a hot shower. The fee was ten dollars, if I recall. The park is based around an old mill and dam, the latter we portaged around in the morning. Below the dam I breathed a sigh of reliefthe river was wider and clear from obstructions, although we occasionally caught on gravel and sand bars, from which we poled or stepped out to get loose. We took a late morning break in a lovely wooded valley in the Souhrada Forest section. This would be a good place to camp. At noon we stopped in Granger, Iowa, hoping to buy a pop. There is no place to buy a pop in Granger. It is an isolated little town, with gravel roads and empty green lots where houses once stood.

A few miles past Granger, where the river curves back into Minnesota for the last time, is Odessa Spring (the largest in Minnesota), a massive, cold clear torrent flowing out of a cave into an instant creek that soon joins the Upper Iowa. We filled a five gallon bag from it, the water from which after seemed glorious in comparison to the other identical bag we had along that was filled with rusty well water. 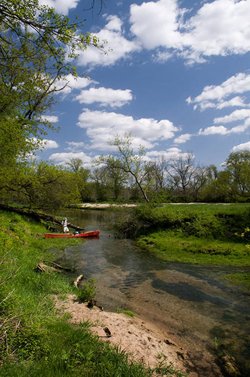 I had ordered the map we were using online (http://www.visitiowa.org/docs/OrderForm.pdf). It is a good map, covering the entire route, but nearing Kendallville my paddling buddy realized that we were not coming to the next landmark, a bridge listed on the map that failed to appear around every hopeful bend, not because we were slow, but because that bridge was gone. This would not be the last time such would happen, as we soon learned to take the bridge crossings on the map with a grain of salt. Also near Kendallville, we were nearly swamped, twice, at sharp bends with large sweepers that crossed most of the river. Some of these troublesome downed trees still grew leaves. A major flood in 2008, which destroyed a few bridges, deposited countless piles of debris along the rivers course. Throughout the trip we spied a few deer and cow corpses doubtlessly killed in the deluge from the year before. From one deer corpse my friend retrieved a 12 point rack.

Kendallville has an outfitters and a bar from where we picked up a twelve pack of beer that was a full case cut in half. I think the bar serves some food as well. We paddled a couple miles farther and set up camp on an island. On one side was a sixty foot crumbling limestone cliff that glowed orange as, in the other direction, the sun sank behind a green hill below which a farmhouse sat a half mile away, across a corn field. It had been a thirty mile day.

The next day was windy, and made us both grumpy as we passed through the much heralded palisadesthe most celebrated stretch of the Upper Iowa. My friend said he didnt believe the cliffs were really 280 feet high so I told him to crawl up them with a tape measure. He said he would if he had one. "Just crawl up anyway," I said, "then jump off and count how long it takes to fall." We bought pops in Bluffton, where there are two large campgrounds that were completely empty.

We cooked noodles at Melanaphy Springs, a fantastic gushing from a crack in the base of a cliff, that then cascades down a steep coulee before spilling in wide braids over a bulge of rock into the river. 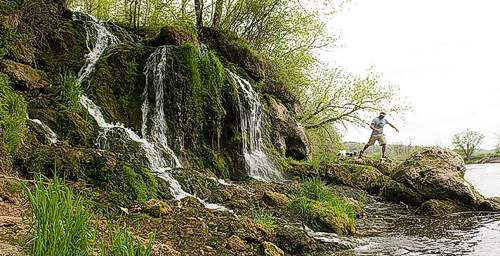 We pushed on until evening and Decorah, just as rain began. We beached at Pulpit Rock Campground (privately owned) and hurriedly threw up a tent. I was very tired of my canoe partner by now, as, I think, was he of me. So we did the only thing we could do and walked through the rain into downtown Decorah where we drank pitchers of beer and ate hamburgers.

Decorah is a lovely little town with several restaurants plus large and interesting parks. Ideally, I would have taken a day off here to laze around, but we didn't have an extra day. The rain held off through the morning and early afternoon. The portage around the Upper Dam was straightforward, though the one at the Lower Dam took some investigation. The flood has altered the landscape; a local claimed to me the water was so high that there was no drop at the dam. We portaged by walking up to a highpoint, where the access road ends, and walking down a steep hill to a large stony beach. It was mid-afternoon and beginning to rain again, so, tired of continually pushing toward the end, I said we would camp and we set up shop in flood-deposited sand beneath giant cottonwoods.

My best memories from this trip are of the afternoon and evening spent camping below the Lower Dam. The weathered dam thundered nearby and the old river rolled past as it always does, 100 yards across the beach.

The next day we had paddled 37 miles by five pm. The stretch below the Lower Dam is as scenic as any on the Upper Iowa. There were more eagles than in other sections, which says quite a bit as they are delightfully plentiful and mature forest covers the valley hills. I had heard the last four miles, which have been channelized into an arrow straight line, were often hard to pass because of low water levels. I couldn't understand how that could be, but laboring over them I saw how the drifting mounds of sand accumulate. Even in early season there were places we had to grind over by poling. I didn't notice what a difference the scenery makes, but the final four miles seemed like fourteen. The next bridge was visible two miles away and the river seemed but a ditch through fields. There is a very well kept landing on County Road A26 that could be used to avoid the anti-climactic final leg.

While planning, I had wanted to keep on to the Mississippi and finish in Lansing, but my pal's car was at the Highway 26 lot, just south of New Albin, so we ended there and headed home.

Canoer's Guide to the Upper Iowa