The West Fork of the Trinity river forms two lakes in the Fort Worth area. Eagle Mountain Lake upstream to the Northwest, and Lake Worth, which forms the northern boundary of the Joint Naval Reserve Base (fka Carswell AFB) and is straddled by the I-820 loop. I had an unexpected day in town plus a loaner canoe, and was determined to experience the "urban Trinity."

I chose the reach of river between the Eagle Mountain dam and the inlet to lake Worth. It is close, and seemed short enough to paddle in one day. In this area the river twists through a heavily wooded area, broadening out eventually into the Fort Worth Nature Preserve (FWNP) just before entering Lake Worth, just north of the I-820 Loop. The FWNP is a surprisingly serene area tucked away just on the edge of a very large city. It costs 5 dollars for the entire day and provides the most convenient access to this particular stretch of the West Fork I could find, with secure parking and several canoe launches.

I put in at the most southern canoe launch, at the junction of old shoreline drive and the causeway to Greer Island. I don't recommend this in retrospect, but hey, I am a newbie. Overall, the trip consumed the entire day, 8 a.m. to 5 p.m. and covered 10.6 river and lake miles total. My average speed was about 2 mph according to my Garmin. I spent a good part of that time bumbling around the marsh, the return trip over this ground was a lot faster, but still, I would leave the marsh out.

My ride this time was a loaner Old Town Pathfinder, a flat bottomed 14 foot Royalex boat with straight sides and weighing in at about 58 lbs. I was solo, so I paddled it end around with about 35 lbs of gear up front (back) to even me up in the water.

Overall, I found this canoe tough in the open, but extremely enjoyable in the river portion of the journey. It turns easily, which I have come to learn means that it tracks poorly on open water and even a little wind will have you j stroking yourself to death. Once in the river, however, it was a dream (based on my field of comparison of exactly 2 canoes this and a Grumman 17 foot). Slow, stable, and easy to turn in and around the tree cluttered channel. Although I dont know for sure, I suspect two paddlers would greatly improve open water performance and when I get a boat, this one will be on the short list.

Returning to the trip...
The large marshy area between the main channel and Greer Island is a very shallow marsh, approximately 2 feet deep to less than 6 inches. You will be pushing mud in short order unless you stay towards the center area away from Greer Island. There are a numerous stumps poking up, which looked dangerous to me but as I approached them I learned to navigate around, and a few times, over them (no holes in the boat Lon, I promise). On the plus side it was incredibly serene, and dead quite on a Sunday morning. It was very quiet and very relaxing. There were whitetail on the shore of the island and numerous birds. There were carp flipping around in the water throughout the morning or at least someone told me they were carp and that this activity was called "finning" but as a non fisherman --- there were lots of fish.

As you swing around the island to the Northeast you will approach a cane break natural levee bank area. Part of my crash course in river lore was that the thinner cuts are actually deeper. I found this counter intuitive at first and after several run ups to very shallow areas I leaned to aim for the thin cuts, where you have some water moving through. This seemed to be true of the upstream channel as well, and after a bit I learned to pick the narrower of two choices if I wanted deeper water.

Moving into the channel, life got a lot nicer. The water is a lot deeper more than a paddle length, and if you stick to the western bank (your port side moving upstream) you will have an extremely nice paddle. I dont know the release schedule for Eagle Mountain dam, but there was plenty of water with no detectable current. The wind moved me far more than the current. I also found that a lot of effort equaled about 2 mph, and a little effort equaled about 2 mph, so I settled for a little effort. There are some power boats in this area but they were polite.

Working upstream (North) the river becomes very beautiful, with a deep (for the Trinity) main channel and cane breaks on the starboard side. On your port side, you will go by the main area of the FWNP. If I go again, I will put in on this area of the river and skip the marsh. Trash is minimal, but I did collect several old bottles and cans.

Upstream of the FWNP you will make a starboard turn along the "causeway" and move into the wilder part of the river. It is still calm, but wooded, and there is a defined channel here. It narrows out to the point where serious power boats are gone. I saw one john boat, a kayak, and two canoes past this point. 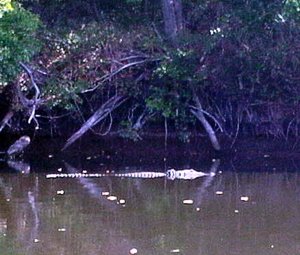 You might also see one of the several alligators that FNWP staff told me were about. I saw an 8 footer (picture is on Google Earth) and it was a bit of a surprise when the "log" I was looking at swished its tail. After some paddling and getting of the camera I realized the gator was not very interested in me at all, but I still cut him a wide berth. Another good reason not to swim in the Trinity.

Continuing upstream the river becomes very "natural", which is to say covered in fallen trees and twisty. I find this lovely, especially with morning sun, but you can expect to thread through trees and some underbrush. From here to 10 mile bridge is very, very cool, shady, and a lazy paddle. I saw a multitude of soft shell turtles and fish, fish, fish. Insects were minimal, but I would avoid this area in the summer as it looks like it would be extremely buggy. Fishing, if that is your thing, is allowed from canoes and kayaks and looked pretty good to me at least.

As you approach 10 mile bridge you cross under high voltage transmission lines which buzz annoyingly. It did not seem to bother the wildlife though, and moving slowing and as quietly as I could improvise with the canoe, I came closer than I have ever come to a Blue Heron. I actually got about 12 feet away before it noticed me and the noise it made I think scared me a lot worse than I scared the bird.

After the power lines, the noise and debris of 10 mile bridge is the dominant scenery. Trash and tires start just downstream of the bridge and pick up as you move under it culminating in the only real eyesore on the whole trip, an abandoned fishing camp. This place is worthy of a slasher film, complete with rotting docks, half sunken boats and derelict buildings. It would almost be interesting except it appears to be the source of a large amount of trash in the river.

After the Freddy Kruger camp, the river opens up a bit in terms of trees, with pasture on the port side. An easy and twisting paddle takes you to the outlet of Eagle Mountain. I found the water level adequate, but passed a few other canoers who said it is much nicer when the dam is releasing.

I parked the boat and ate lunch. If you are careful you can debark on the rocks crossing the river without getting nasty in the mud and muck. There are some concrete platforms associated with the dam structure that gets you up out of the brush for a nice break. Unfortunately, I did not have too much time to explore as the day was winding down. The trip back was equally pleasant, and the warmer temperature really brought out the turtles, who invariably more attentive than the Heron, jumping in the river with a loud splash as I approached with 25 or so feet, despite my efforts at stealth.

The return to the launch through the marsh was painful, both figuratively and literally since my arms were jello by this time. God smiled on me and sent wind, which propelled me at an oblique angle for most of the way. I "poled" my way across the mud flats just in time to catch the gate attendant as he was locking up. Take note they close sharply at 5 p.m.!

Overall, it was a very enjoyable trip and I recommend it. I will do it again for sure, hopefully with someone who wants to skip that marsh.

From I-820 take Jacksboro Highway West. Go through Lake Worth, you will see a sign on the right.