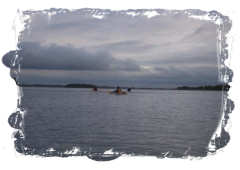 A friend had some vacation time available and he wanted to kayak down the Trent river. Unfortunately the dates were only a week prior to the opening of the Trent Lift Locks. So we had lots of portaging to look forward to. Another friend suggested going from Lake Scugog near Port Perry out to Orillia over the course of a few days. With some quick math I figured we could easily do 4-5 km/hr on average so we planned for 30km per day for about 4 day's.

Day 1:
We departed from the east side of Lake Scugog and found our first portage at the Lindsay lock. There are no easy "put in" or "take out" areas at Lindsay and the portage here is over 2 busy city streets. This was the hardest portage with the exception of Kirkfield. There are a number of good RV type camping areas in the north part of Lindsay as you head out to Sturgeon Lake but watch out not to camp too close to the water treatment plant on the east side of the river - especially when winds are from the east!

Day 2:
From Lindsay we entered Sturgeon Lake and paddled north up the eastern shore (there's not much to look at on the west side - and there's a few marina's on the east too if you need breaks/supplies. Crossing Sturgeon Lake (like Lake Simcoe is something you want to time properly to avoid dangerous waves). We went to the northern point where you can see the Bobcaygeon water tower on the north-east horizon and then crossed over to the north shore where we could follow the east side of the lake again as it narrowed into the river leading to Fenelon Falls.

In Fenelon Falls there's a few good restaurants along side the lift lock, so we parked our kayaks in the lock's park area on a hill so we could keep an eye on them while we enjoyed a long lunch.

From Fenelon Falls you enter Cameron Lake to the north. Cameron Lake is a quick crossing however the channel is not obvious so a good map and GPS helped guide us into the Rosedale lock.

Day 3:
As far as locks go Rosedale is one if the nicest I've visited and served as a great camping location for the evening. We were even fortunate enough to meet up with a lock manager in the morning who shared some good information, opened the washrooms, and called ahead for us to get info on the water levels of the canals ahead. This allowed us to skip the two Talbot River detours we had expected to make. (note that some locals had told us that while the Talbot was used by boats before the canals were dug they are no longer passable in certain locations - if you plan to take the Talbot bring a good pair of rubber boots for the swampy portage).

Balsam Lake is a very large lake and best crossed in the morning when you're fresh. However if you need to rest there is a good sized island in the middle if you need cover or a break. The canals on this lake are also best navigated with a good map and GPS as they're not obvious and tough to see given the distance across.

Once you're past the bridge there's a great little rest area on the right. From here it's another gorgeous paddle up the canal leading into the Kirkfield lift lock. There is a maintenance area for the lock staff just before you get to the lock gate where it's reasonably doable to get out but I believe this is technically trespassing... lock workers were there when we pulled out and were friendly - it was obvious we'd been on the river for a few days I suppose.

Next you follow the river into Canal Lake - likely the longest lake crossing we had. Again watch for deadheads through the eastern part of the lake and stick close to shore - we found a few hazards in the channel itself! There is a good RV campground half way across the lake near by the bridge but we chose to press on into the Lake Simcoe canal system which you'll find at the west end of Canal Lake with a good map / GPS.

The river twists and turns through some real nice properties and made for a relaxing cool down paddle as we came to a rest for the evening at the Bolsover Lift Lock. This is a very high lock and in buggy conditions camping right at the edge of the hill is a good option - we found the draft from the water fall provided a good breeze to keep the bugs away. It also made for a scenic sunset although I think most of us were more interested in food/sleep after our longest day of paddling.

Day 4:
Given our average speed of 3km/h including breaks we estimated a 3 hr paddle from this point to the mouth of Lake Simcoe. However more critical, I'd checked the weather report before dinner and realized that conditions were about to become unpredictable so we decided to call home and ask for pickup at the mouth of Simcoe instead of at Orillia. I had many people, both knowledgeable Trent folks and locals from Orillia and Lagoon City, advise me that if it's not guaranteed to be flat water - to avoid it if possible. I learned a few days later that a few people had drowned the following weekend due to rough conditions and cold water - thanking my lucky stars that wasn't us.

The paddle from Bolsover is a lazy river that enters an arrow-straight canal containing 4 locks each about 1km apart... this requires lots of energy to portage each one - the last being the longest portage distance wise. Finally you find yourself paddling under the highway 12 train tracks, past the Talbot River opening (on the north side) and then on to the blue swing bridge at the Lake Simcoe opening. Here we met two very fine ladies... one with Tim Horton's in hand for each of us and the other with more home made wraps.

What a great trip!

Things to consider if paddling the Trent System BEFORE official Lock opening:

Tip: check the weather prior to heading onto Lake Simcoe as waves can get to 6' with little notice...if conditions are changing or unpredictable avoid it. Also the eastern shore of the lake is lines with rough rock and not real paddler friendly.

Tip: while GPS is great - having a paper map is a good backup

Tip: this section of the Trent River does have cellular tower access so bring a cell/pda (in a dry bag of course)

Tip: recommend at least 3 people for this trip - makes for easier portaging and distribution of weight between kayaks

More Pictures of the trip.

Swift Canoe Company of Orillia rented us 2 of the 4 kayaks.

None - we went before the lift locks opened

The start of the trip is anywhere on Lake Scugog at Port Perry about 30 minutes north of Oshawa Ontario.
Ideally you would put in on the east side of Scugog Island around Ceasarea.