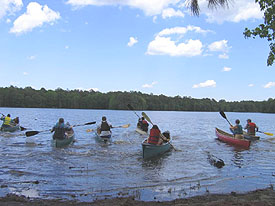 The Lilydipper Games Race Results
The third attempt at staging the Lilydipper Games was a rousing success. It appears that the secret to encouraging participation in the games was increasing the value and rarity of the prize swag.

The first event was the Solo Stern Race. The rules: One paddler, facing the bow. Either sitting on the stern seat in a tandem, or kneeling in the stern of a solo. Out around the marker and back. First boat stern to touch the beach wins.

The participants lined up on the beach, spread out before the marker buoy in the stern of their chosen craft. On your mark, get set, GO.

Shortly after Go one comically complicating factor became apparent. There were no specification as to which side of the marker buoy to round; half of the boats went to port, half to starboard. All of the boats met in a collision of crashing boats and thrashing paddles on the far side of the marker. Rob Powell, employing his sailboat racing background, was the first to emerge and looked to be the winner. Scant yards off the beach, in a comfortable lead, Rob suddenly remembered the phrase First boat stern to touch the beach wins and was forced to laboriously crank his Penobscot 180 degrees.

Theresa Alexander paddled her OT Camper barge to a second place finish, taking home a coveted purple Duckhead bottle opener. Third place took a Duckhead bumper sticker, which was properly awarded, but in the race aftermath no one quite remembers who placed third. It may have been c2g, who would go on to suffer ignominious defeat in the following races.

The second event was the Solo Bow Race. The rules: One paddler, facing the bow. Either seated on the bow seat in a tandem, or kneeling in the bow in a solo. Out around the marker and back. First boat to touch the beach wins.

This was the most difficult of the three races, as bow-heavy canoes are unpredictable. What was predictable was another confusion of colliding Duckheads at the turn. This confab of crashing Duckheads resulted in the familiar sight of c2g beneath the overturned hull of his canoe and provided Cathy Poff with her first swim, not to mention a large Duckhead-purple contusion on her upper arm.

Determined to take home the block of cheese (as well as the ZRE paddle bag and Dock Rock Campfire Classics CD) Rob Powell was not to be denied first place in the bow race. Patty Hale was equally determined that Theresa should not be the only Squatter with a Duckhead bottle opener. And Cooper McCrea demonstrated that youth and stamina sometimes defeat age and guile for third place.

This race is named in honor of friends Alan & Cindy Nathan, to commemorate their unique choice of seating arrangements as novice paddlers. Many of the participants were by now veterans of the chaotic buoy turn and had devised a variety of strategies to ensure victory.

C2g and Canoeswithduckheads rounded the difficult buoy turn cleanly and appeared to be charging to victory several boat lengths in the lead until they inexplicably tee-boned the only obstruction on beachfront, a plainly visible log mere feet from the finish line. C2g valiantly flung himself into the water (as he is often wont to do) in an attempt to lighten the bow, but by then the rest of the field had closed the gap.

Thanks to everyone who accepted the Lilydipper challenge. A good time was had by all, especially the spectators.

As is customary in the Canoe Orienteering event Id love to hear some race tales told from the participants view and suggestions for improving the Lilydipper Games in 2006.

Developed State Park facility, with drive in and walk in campsites as well as rental cabins and yurts.

Camping fees, or day use fees if not camping.