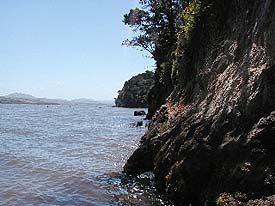 When you paddle from the eastern to the western shore of Tomales Bay, you cross a border�not a political border, but a tectonic one. Tomales Bay is a finger of the Pacific created by the San Andreas Fault. Its eastern shore, on the North American plate, is typical bucolic Marin County coastline: low rolling hills, grasslands dotted with valley oaks and dairy cattle. The western shore is another country, literally: exotic ferns and orchids tumble down steep cliffs pocked with sea caves. This is the Pt. Reyes Peninsula, which is on the Pacific tectonic plate, and is moving northward up the California coast at a rate of an inch or two per year. Every now and then it lurches a bit. In April of 1906 it lurched and everybody in San Francisco fell down, as did many of the buildings.

The waters of Tomales Bay cover the border and create what is called a "liminal" place�a place of transition, of change, a magical land- and seascape that is neither here nor there, but somewhere in between. You can paddle with dolphins and bat rays, glide over jellies and seastars, and watch loons, cormorants, ospreys and herons. In migratory seasons flocks of surf scoters float in great arcs stretching almost the mile width of the Bay. When they take off the sound of their wings is like the sky itself is lifting.

Put-ins are all over the place. My favorites are Nick's cove on the northeastern end of the Bay, just off Highway 1 a few miles north of the town of Marshall. It costs $5 to leave your vehicle there. Then you can paddle out to Hog Island and to the beautiful white cliffs on the western shore�good bat ray and dolphin territory. You might spot a leopard shark in season. Right in Marshall you can put in on the beach at the kayak rental place (Blue Waters) for free. On nice weekends it can be tough to find parking. On the western shore go to the Chicken Ranch beach a mile or two north of Inverness. Blue Waters has another kayak rental place there as well. Maps of the area are readily available on the internet; just google Tomales Bay.

Heading north out of the Bay is for experienced, well-equipped sea kayakers only. Best kayaking for novices is in the morning, before winds pick up. Mid- to late-afternoons are usually windy, creating significant chop on the bay. Great for intermediate kayakers who want to expand their horizons a bit.

Lots of places to stay in Inverness and other Pt. Reyes locations, good restaurants in Pt. Reyes Station. Google search will yield many results.

Route 101 North from San Francisco across Golden Gate Bridge. You can get off at Sir Francis Drake Blvd just before San Rafael and follow Sir Francis Drake out to Inverness and the western shore of Tomales Bay, or you can get off 101 at the downtown Petaluma exit and go west out D street, which becomes the Bodega Highway, and follow it to Pt. Reyes, Route 1, and the eastern side of Tomales (go north on Rt. 1 at Pt. Reyes Station).