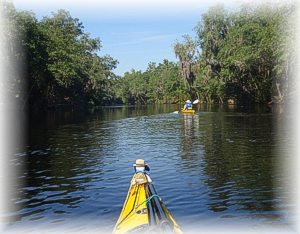 Just got back from 8 days on the Suwannee River. Five of us started off with a visit to Big Shoals which was kickin! A definite Class III. Took a bizillion pictures of it.

We camped the first night at Stephen Foster SP. We didn't have to eat dinner, we were still full from lunch so we spent the afternoon checking out the park. The Springhouse was really cool. The river was still pretty high so it was running into the Springhouse. (63.69 on the USGS gage at White Springs) Very nice campground also. The next morning we were up early repacking everything. I had all my gear packed & then realized my glasses were missing. I did remember where I put them, in the pocket inside my tent which I had just rolled up & squished into a dry bag. I unrolled the tent enough to get my hand inside and into the pocket. WA-LA there are my glasses - not broke not even bent.

American Canoe Adventure in White Springs shuttled us from the SFSP to the 41 bridge to put in ($16.00 for all of us & our gear). The current was running at 3.5mph by my GPS. We were going to Woods Ferry River Camp for the night which was 12.7 miles down river. Mostly all we had to do was keep the yaks pointed down stream & the river did the rest. There were a lot of places where the water was a series of boils or whirlpools. My friend Carol called these areas "Whirlleybobs".

At Woods Ferry RC the water was completely over the dock & the kayak storage racks, so we paddled right into the ramp going up. We started the unloading process. There is a cart to pull your gear up the ramp. We made about 4 trips up the ramp with gear, after the first trip up I was wondering why I brought so much food.(I ate good all week, but the food was the heaviest part of my stuff) Then we pushed, pulled, carried & cussed five kayaks up that ramp to our screened sleep platform. We were totally wiped out by this time. The camp keeper "Wild Gator Bill" who has been there for quite some time says "You could have left your kayaks on the ramp. You guys are the only ones here tonight." We were so tired we had to make ourselves stay up to at least 9:00pm. Of course the next morning was a repeat just reversed. 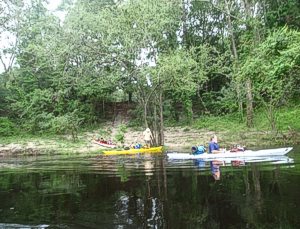 I think it was around 9:30am when we got on the river Monday morning for a 19 mile paddle to Holton Creek River Camp. This area is where we started seeing the limestone bluffs. They're not as impressive when the water 10-12 ft. above what it normally is. The sand bars were few and far between, but the sturgeon put on there usual show of jumping high out of the water. You just never knew where they would jump next so we never got a photo of any but a few of us did get splashed by them.

When we arrived at Holton Creek RC the dock of course was flooded. We couldn't get into the stairs because of the hand rails. There was a small sand beach just before the dock we paddled back to & unloaded there. We pulled the yaks up to a post that was further up on the beach & locked them to it. And started hauling stuff up the hill to the platforms. I have to say these sleep platforms are really nice. I could recharge my camera batteries and with it being so warm I especially liked the ceiling fan and the AC in the bathrooms.

We were up early again Tuesday morning & on our way by 8:30. We paddled up every spring run but the springs were flooded also, so we didn't see anything but that coffee colored water in them. We saw some amazing tree roots though all along the river. Just before lunch we passed by the confluence of the Alapaha River & Suwannee River. We paddled up it a short distance. It was pretty muddy & the current was strong. Right at the confluence we had major "Whirlleybobs" to paddle through.

We arrived at Suwannee River SP about 3:30pm and decided to trade our campsite for a cabin which was much closer to the boat ramp. We spent most of the evening on the screened porch in the swing & rocking chairs, sipping drinks with ice in them. I definitely want to see more of this SP. The next morning we were cramming ice into water jugs, hydration packs, and anything else that would hold it so we would have cold water for a little while. We were back on the river Wed. morning by 8:00am.

The confluence of the Withlacoochee River North is just below the ramp at SRSP. We paddled up it just enough to say we were in it. The "Whirlleybobs" weren't as bad this time. We just goofed around paddling from one side to the other. Saw a couple of deer & a red fox. We were getting pretty close to Dowling Park and it was just lunch time, so we started lookin for a place to stop. I just happen to look back over my right shoulder as we were coming around a bend in the river and saw a small opening. I paddled back and it was a very small spring. I yelled for everyone else to turn around. The short run into the spring was less than a foot deep, so it wasn't flooded with that brown water. We stayed there for about 2 hours playing in the cold water after having lunch.

Our stop over for Wednesday was supposed to be Dowling Park RC which had just opened in late March. The river flooded about 2 weeks after it opened and caused major damage. We ended up staying at Advent Christian Village right across the river from the River Camp. Doug Maby, camp manager went above & beyond for us. He met us at the landing, helped us carry all of our gear up the 35ft bluff, load it in the back of his truck & took us to bunk house where we were staying for the night. The next morning he came & got us, helped load our gear back in the truck, and carry it back down the bluff to our kayaks. He also has a primitive camp sites with a place to get water & take a shower if you want or you can stay in a bunk house. Camping is 3.00 per person or 5.00 with a shower included. The bunkhouse is 18.00 per night per person. There is a small grocery store if you need supplies, a deli & a cafe if you're tired of camp food or your own cooking.

We left ACV at 9.00am Thursday morning and by 11.00am it was thundering, lightning, and pouring rain. In the worst of the lightning we pulled to the side of the river and waited for an hour for the worst of the storm to pass. We paddled most of the way to Peacock Slough RC in the pouring rain. Once we got the yaks unloaded we all got a hot shower to warm up. We had an early dinner that night.(no lunch stop)

Woke up Friday morning to more rain. After breakfast there was a break in the rain so we loaded up keeping the rain gear & spray skirts within easy reach and stared out. Within an hour we were getting pounded with rain again. I was thankful it was only rain (no lightning this time) We found a couple of small springs that were not flooded and got a few photos. The rain had stopped for a while so we stopped at Royal Springs for lunch. We had enough time to eat & the rain started again. We hung out there in the rain for a about 1.5hrs then headed out for Adams Tract RC. 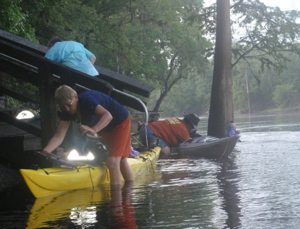 The Adams Tract RC dock & most of the stairs were under water. Ron, the camp host there had taken the hand rail off of the stairs on the down river side so you could paddle up beside the steps one at a time and get out & unload. After unloading each yak we would tie it off on a long rope & float it down river so the next one could get in to the steps to unload. After we got them all unloaded we pulled them up river from the steps tied the bows together and tied it off to a big root on the bank & then around a tree, then locked the sterns together to the upriver hand rail. They would have to float there for the night.

I have to say Ron keeps this camp just as spotless as Gator Bill keeps his Woods Ferry Camp.

This was our last night on the river. I think we were all sad for it to end but damn glad we were going to be out of the rain sometime the next day.

Saturday morning I got up, put on dry clothes, went out and took a good look at the sky, come back and put my wet clothes from the day before back on. Saving my clean dry clothes for when I get to the take out so my hubby will let me ride inside the truck on the way home.

It (of course) was a reverse process getting our kayaks loaded up Sat. morning. Taking over an hour to get the five loaded. We stopped at four more springs on the way but they too were flooded. It seemed like a very short 9.5 miles to Ivey Park in Branford where we were taking out. There was a light rain off & on. We made it to the ramp at 11:45am, got all gear unloaded & packed into large duffel bags for the ride home.

This was the first kayak camp trip I've ever planned or done. It's not my last though. There are some things I'll do different & some things will be the same. One thing I wouldn't change is my friends who came along. There was Carol who kept us laughing, Ed who tested our bandaging skills, provided much muscle, and helped keep my mind off the severe lightning, last but not least Mark & Janie, who also provided muscle for shoving & pulling yaks up some steeps banks, their amusing bicker and banter, and funny stories. I'm glad they all had enough courage to come along with me on my first week long kayak trip.

With the high water it was easy getting from one camp to the next. But I really missed the high limestone bluffs and numerous shoals that are there when the water is about 10-12ft lower.

There were no ramp fees; the River Camps are still free for now.

If you require a shuttle, American Canoe Adventure in White Springs, FL or Suwannee Canoe Outpost in Live Oak, FL

Camping at the State Parks or at Advent Christian Center is an additional fee.