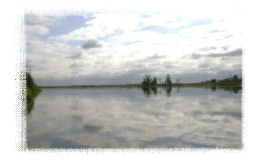 A beautiful days paddle through corridors of tall grass in pristine, quiet marshland, with a few things to watch out for: the tide and water level, the currents, and the possibility of getting lost in the refuge channels! I saw many beautiful birds, including a small brown mother duck with 7 or 8 totally adorable ducklings.

Launched on an overcast Sunday morning from the south side of the Salem River across the river from southernmost end of Supawna Meadows National Wildlife Refuge. If you look north towards Supawna from the dock, you'll see a string of towers carrying power lines (the one non-scenic element of the trip, but they are easy to ignore once you get on the water). Look closely at the second closest tower and you can just make out the eagles nest at the top, said to weigh over a ton. Bring binoculars if you want to try to spot the eagles.

I had taken a couple of precautions before leaving, and I was glad I did. I wrote down the high and low tides for the day (see link) so I'd know which direction the currents would be running, and when they would change. And at Google Maps (maps.google.com), I printed out a detailed aerial view of the area, which turned out to be much more up-to-date than my Salem County paper map. New channels have been cut in what the paper map calls Hickory Island (the southernmost chunk of refuge land), and you can enter the refuge by paddling upstream from the launch at Sinnickson Landing Road and then cutting across the river to the west into the refuge channels. I did this because the tide was going out, and was going to keep going out throughout the trip, so I wanted to do the hard part against the current first.

My plan was to explore some of the smaller channels, but the water level had dropped with the tide so I could only get a short distance into them before I was paddling mud. I definitely didn't want to get stuck in the mud for hours until the tide came in, so I turned around and paddled the main channels, which still had plenty of water. I was amazed that there were virtually no bugs it seems like a place bugs would love, but if they were there, they didn't bother me at all.

This third picture (right) shows one of the channels, and brings me to another key point: all the channels look exactly the same: they're beautiful, but they're very very hard to tell apart. Its kind of like a corn maze on water. So be careful to keep track of where you are on the map, or you could spend a long time finding your way out.

Despite my best intentions, I did get a little disoriented and ended up farther north than I had planned. Eventually, I just followed the tide current out to the Delaware, and paddled south back to Sinnickson Landing.

A note of thanks to Ben Ford, whose Salem River entry on this Web site alerted me beforehand to the strength and importance of the tides in this area!

Spacious parking lot for over a 100 cars (there were 3 others there today).
Well maintained dock and boat ramp.
No restrooms.

From the Delaware Memorial Bridge, go south on Route 49, over the bridge into Salem. When 49 turns left onto Broadway, keep going straight. In a couple blocks, turn right onto Grieves Parkway, then turn left when it dead-ends on Tilbury Road. Make the third right off Tilbury onto Sinnickson Landing Road. After the road bends to the left, look for the parking lot on your left, and just beyond it, the public dock and boat ramp on your right. Do not park at the dock--use the parking lot.

"Quiet Water, New Jersey" describes Mannington Meadows which is a mile or two up the Salem River from this trip.

As far as I can determine, there is no boat ramp in Supawna Meadows itself. I located the dock by Googling and found this:Maps, Directions, Sites