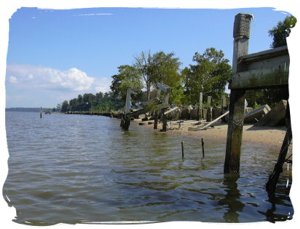 We began our trip from the Claremont boat landing. The weather was 50% cloudy with a stiff NW breeze and an expected high in the mid-80s. It was a few hours before low tide and the water was fresh with 6 visibility. The river is only about a mile wide here, so we had a clear view of nice homes on the partially wooded opposite shore. To the right was an old ferry landing. We headed downriver with the wind and tide favoring us. Some of the homes in the community of Claremont Beach are on such high pilings they look more like transplants from the Outer Banks of North Carolina. The town is in fact 40 miles upriver from the Chesapeake Bay.

Getting this far had been an interesting chore. We first took the Rt. 31 ferry from Jamestown to Scotland. On both shores, cormorants and gulls crowd the pilings in mostly segregated colonies, apparently waiting for propeller sushi. We then drove through back roads where the scenery varied from historic chic to depressingly poor. Our primary boat landing at Sunken Meadows Beach, along with the entire community, had vanished, a victim of Hurricane Isabel almost exactly three years before. A fisherman directed us to the public landing in Claremont Beach. To get there we had to first pass through the town of Claremont which is as close as you can get to a ghost-town without every last person actually being dead. Most of the buildings have faded to gray, are overgrown with vegetation, and covered with No Trespassing signs. The nice people at the small remaining general store directed us down the hill to Claremont Beach where we were surprised to find an apparently new and almost bustling waterfront subdivision. The homes arent mansions, but youd be proud to own one. Claremont Beach too was heavily damaged by Hurricane Isabel, but insurance money, a slightly more protected location, and an expansion in the local sewer system had enabled them to rebuild and take in a few strays.

Paddling past the shorelines of the former community of Sunken Meadows Beach, now bulldozed flat, we saw piers stripped to their pilings. Its awe-inspiring to imagine the forces required to smash thick wooden bulkheads, or explode rip-rap out of its galvanized wire netting. To such furies a mere house is a cardboard box. It looks like Sunken Meadows Beach was only a foot or so above the highest tides, so had little protection from hurricane storm surge and waves which could build up over a fetch as large as 8 miles. As a result of the destruction, theres plenty of re-bar hiding under the water. While Im used to small hull scrapes from sharp rocks, re-bar is my bete noire for which I keep duct tape in the emergency dry bag. There are also old bricks, car engine blocks, and at least one bicycle rack standing upright out in the river. 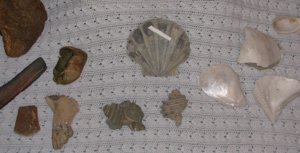 Past Sunken Meadows Beach the cliffs resume. In the James River basin, beachcombing always yields cool stuff like 500+ million year old sandstones containing fossilized worm burrows, heavy iron minerals which have precipitated into bizarre shapes, and gar skin which looks like chain-mail made from childrens fingernails. But what makes this area especially interesting are the fossils, laid down millions of years ago when the Atlantic Ocean of that warmer earth submerged todays coastal plain. The cliffs consist of a permeable sandy layer on top of impermeable grey clay containing scattered shells. This combination erodes fiercely, after which the rain and waves sweep away the sand and slowly melt the clay. Many poorly preserved fossils disintegrate in the process, but most of those that make it to the beach are well-mineralized and tough: porous sea mammal bones once filled with oil, shells of giant scallops, clams and snails ranging from modern-looking to exotic, etc. The little white spots on the beach in the picture are the released fossil shells. 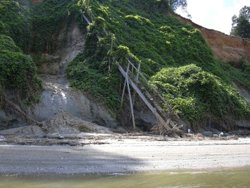 If you had a home on the cliffs here, besides enjoying the great view from your patio youd probably be tempted to build a staircase so you wouldnt have to rappel down to the beach. Big mistake. One of the most common unnatural features of these shores is the storm-twisted staircases to nowhere. Sometimes even whole concrete patios go over the edge. Frustrated homeowners cleverly hang long black PVC drainage pipes down the cliffs to keep water runoff from gullying the sandy topsoil. They have also encouraged the growth of kudzu to reduce erosion, though it may not help. Although kudzu flowers arent usually noticed among the riot of green leaves, the purple and white upright clusters are beautiful and smell like the sweetest batch of grape Kool-Aid your mother ever made.

On the way back to the landing, someone must have cued the wildlife (or maybe just our attention) because we saw belted kingfishers, ospreys, great blue herons, and bald eagles. A few large terrapin heads poked out of the water in addition to the jumping fish. But given the nuked state of the scenery along this shore, a wildlife tour would be more appropriate further downriver near Pipsico (owned by Boy Scouts of America) or Chippokes Plantation State Park.

Almost any trip along the Isle of Wight and Surry County shores of the James River is of regional interest for beachcoming/fossil hunting. This short section was a big hit with my 10 year old budding paleontologist. Most of our haul shown in the photo is typical local fare, but having two pairs of eyes and recent Tropical Storm Ernesto certainly improved the odds. The brown bean-shaped object is a whale earbone the size of my fist. Its so dense and well-petrified, completely unlike typical fossil whalebone, that I almost tossed it aside as an odd curly rock.

The described trip was 5.5 miles taking a dilatory 4.5 hours. We spent almost that much time driving to and from, but to see how happy my 10 year old was priceless. Plan your trip for low tide to make sure youll have a beach to walk on and can stay off private property. Pick your landing sites so that you wont have to explain your wet sand entitlement to someones dog. In good weather, intermediate paddlers might cross the river, cruise the wooded north shore, and check out the half-sunken barge and its completely submerged friends nearby. Long distance tours can explore this area (as well as Morris Creek) from the landing at Chicahominy Riverfront Park.

No services landing. Private homes are nearby, so avoid doing things which could cause the residents to terminate public access.

To get to the Claremont Beach boat landing from Claremont, go to the bottom of the hill and turn left into what looks like a private driveway. If you ended up at the Residents Only boat landing, then back-track a block or two.