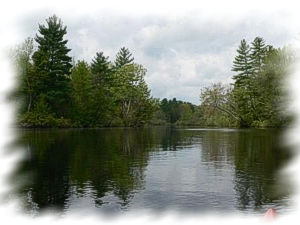 The Suncook River is trip number 32 in Quiet Water 3rd edition. The navigable section is bounded on the west end by a small dam at Barnstead, and extends for about two miles to Center Barnstead at the east end. The river is easily accessible at either end, but slightly more so at the dam thanks to a concrete ramp. You can view the river from above by searching for either Barnstead or Center Barnstead using your favorite mapping website.

I explored this river in two trips, although it could easily be done in one in 4 to 6 hours, depending on how much poking around you do. I do a lot, since my main reason for paddling is to explore inlets and marshy areas and take pictures of what I find.

The first trip started from the east end. The current was flowing west at a knot or two. I soon found a nice calm marsh on the north side of the river, just behind a large yet empty industrial complex, its tall stack the only thing visible above the vegetation along the river bank. Since it was a sunny day innumerable turtles were sunning on rocks and logs. Most dove away on my approach but some brave or stupid ones stayed behind to keep an eye on me. I saw at least one beaver, and two other mammals that were mainly brown blurs followed by splashes. 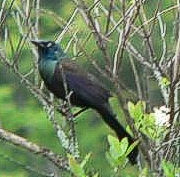 In the air red shouldered blackbirds were prevalent as usual (at least here in NH). I also saw eastern kingbirds and common grackles. Black from a distance, I was fortunate enough to capture the deep iridescent blue breast of the grackle with my camera on full zoom. Interestingly the blackbirds did not appreciate the grackles and chased them without mercy. This gave me plenty of opportunity to see the unique keel-shaped tail of the grackle in flight. Later this trip I saw a great blue heron which I attempted to pursue. Herons tend to just fly further down the river, so if you miss them the first time you can, if careful, catch them later. I chased the heron down a feeder to the river and eventually caught up, but he flew behind some trees. The current was actually pretty strong, so I turned back.

The second trip started from the west end on an overcast morning. Another marshy area presented itself for exploration on the south side of the river, where I saw pretty much the same stuff as at the east end. Further upriver was a tree that had recently been felled by a beaver, but no sign of the miscreant himself. About half way between the two ends there are the remnants of a bridge. This caused me to study the land on either side and I noticed that the spit of land to the east was actually a causeway. I found a place to pull in and walked it for a distance. I found a lone lady slipper which, if youre into gardening, is a fairly rare and expensive flower. 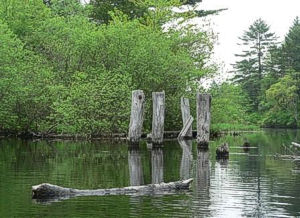 The causeway appeared to have been topped by a plank road, but most of the planks were gone or long buried. After looking at the map I guessed that the road had at one time connected Barnstead with Center Barnstead, before the dam was built. Its possible that it was a railroad bridge, but I saw no rails (not unusual) and what remained of the bridge didnt look sturdy enough for trains.

So in summary while short, this section of the Suncook provides an excellent paddling experience for the explorer, but if you want challenging water youd best look elsewhere. It has a few houses (look for the junkyard house on the north side, near the dam) and probably gets fairly busy on summer weekends due to the easy access.

On Route 28, 3 miles east of Pittsfield