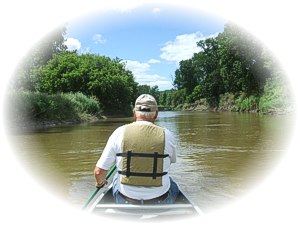 Near the top of Michigan's lower peninsula there is a fan-like array of navigable rivers, well known to paddlers, offering a variety of paddling challenges. The Sturgeon River runs north from the small town of Wolverine and empties into Burt Lake.

We loaded everything up, drove over to I-75, and headed north to Wolverine, a small town on the Sturgeon River. On arriving we were impressed with its well-manicured, movie-set appearance. We also noticed a large encampment of motor cyclists at a campground on the river. We learned later that Michigan cyclists from around the state gather annually at Wolverine, like a mini Sturgis, to commemorate 9-11. The familiar roar of Harleys could be heard throughout the weekend. A couple miles north of town, we came to Haakwood Campgrounds. After picking a nice site under a large old oak, we paid the $15 per night fee and set up our tents.

Saturday morning, we drove north to our takeout near Burt Lake and then back through Wolverine and south for about a mile to the put-in. It was a clear morning but rain was predicted for the afternoon so we got moving. The river was narrow at the beginning, crystal clear with a good current and plenty of tight twists and bends. The scenery before we reached Wolverine was mostly low trees and shrubs. It appeared that the area had recently experienced strong winds because we came across a lot of tree falls. However, they were trimmed and cleared, probably by the local liveries. This was not so on the later rivers we paddled.

We would rate the Sturgeon as our most enjoyable paddle. It was a beautifully canopied river with a strong current, a good water level, and some challenging Class II rapids. We wanted to stop at the city park on the river when we came upon a pig roast sponsored by the local American Legion, but we kept moving because of the growing threat of rain. Luckily, it wasnt until the end of our paddle that a warm rain started.

It was still raining after we finished our shuttle and drove to town for some beer at Mauldons Saloon. Mauldons has a large canvas awning. Under it a dozen or more black-leathered cyclists were hunkered smoking cigarettes. Michigan has banned smoking inside bars. On the street along the curb was parked a long row of chromed-up Harleys, glistening proudly in the rain. Inside the bar was a loud, raucous crowd of cyclists. As we walked in, not wearing leather, we felt the entire bar look up and stare at us. But a beer later, we were having a friendly conversation with a bunch of half-tanked Harley guys. And another beer later an incident occurred that got everyones attention.

We heard the roar of a Harley on the sidewalk out front, saw smoke billowing up from a spinning tire, and then someone threw the front door open and the smoke came pouring into the bar. All the leather in the bar jumped up, whooping and shouting, "It's a burnout!" This stunt apparently was common at Sturgis. One member of the crowd, adapting a famous line from "Apocalypse Now", hollered, "I love the smell of burnt rubber in the morning."

On the way to the campground, we stopped at the Meadow Bar and Grill and had an exceptionally good pepperoni pizza. We were so impressed that we came back the following night for delicious barbecued pork-loin sandwiches.