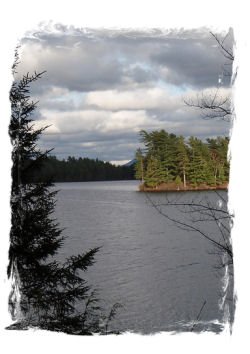 We started up to the St. Regis Canoe Wilderness from Nancy's house around 7pm on Thursday. Drove through the night for over 420 miles to reach Little Clear Pond around 2am.

May 2, 2008 - Little Clear Pond to St. Regis Pond
Once we arrived, we slept in car for a few hours until daybreak, where we commenced offloading gear in preparation for our paddle into the wilderness. We were all set and on the water as the sun was rising across the water.

Little Clear Pond was very nice with a few islands and beautiful views. We paddled up to the Northwestern end of the lake to the canoe portage trail. From there I took my barrel upon my back and canoe overhead and walked the portage path to St. Regis Pond. This portage is around .25 miles and is an easy up and down affair. Nancy carried a bag over and we then returned for her kayak, which we portaged over on the second trip with both of us on each end and me with my heavy pack on my back.

We put onto St. Regis Pond from a nice little wood plank dock and headed north into the lake. There were a few folks out on the lake already. Last year's campsite was untaken, but we decided upon another campsite across the lake on a small peninsula which offered stunning views of the islands and the east.

We set up camp, gathered a bit of firewood and took a short hike around to orient ourselves to our surrounds. That night, we ate our dried food, had a small fire and went to bed. Loons and owls called out in the night and there was a bit of an on-and-off rain overnight. 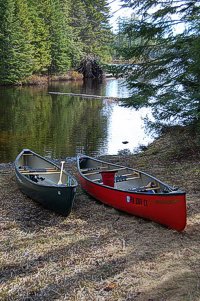 May 3, 2008 - Paddling Ochre Pond/Hiking to Fish Pond
I was up as soon as it became light (around 5:15 am). Cooked up some water and made some French press coffee and I ate some dried granola and milk (just add cold water). Good stuff. The weather was off and on, with a bit of a rain and drizzle from time to time. Since we were there to paddle, we continued on with the day's plan to paddle down to Ochre Pond via the West Branch of the St. Regis River.

We only had one pull over a downed tree that was not passable over, under, to the left or right. We were down at Ochre Pond before we knew it and did the short circuit around the lake, and over to the portage trail to Fish Pond.

Instead of paddling down the river to Fish Pond like I did last year with Darren, we decided to just take a hike out there and view the pond from its eastern shores. The hike was beautiful, with a ford through a little stream, views of Monday and Mud Pond and after our hike over a pine-lined ridge we were treated to a beautiful view of Fish Pond. The wind was already kicking up there and we ate our lunch (tuna fish for me) on the peninsula as we took in the stunning view.

Nancy and I returned via the same trail to our boats. We paddled back across Ochre Pond and up the West Branch of the St. Regis. I only needed to climb over one deadfall, the beaver dams and other obstacles were not a problem for me. Nancy didn't enjoy the paddle upstream and had some difficulty paddling back up the beaver dams, but she stuck to it and got back to the fish dam barrier before too long.

After carrying the dam, we paddled back across the windy St. Regis Pond and to our campsite.

That night, we had our dinners, and wondered around taking in our views. I tried my hand at fishing, but wasn't having much luck. After a small fire and a spot of tea, we decided to call it a night and went to bed. 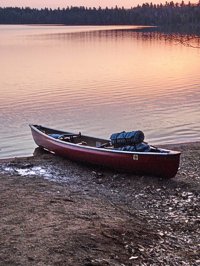 May 4, 2008 Paddling Green Pond and Little Long Pond/Paddling Under the Milky Way
Another drizzly start, but once we got out on the water we paddled to the East to the portage trail to Green Pond. I took my canoe over first and then Nancy and I returned for her kayak. After a bit of a paddle around Green Pond (so named from its greenish waters), we decide to paddle over on Long Pond. Since this portage was longer, we left Nancy's kayak at Green Pond and I carried the canoe over to

Little Long Pond where we would take turns paddling. After I ran a circuit of the lake, I returned and let Nancy take the canoe out for a spin. She did very well and took it up around the bend and back.

After a bit we decided to return to camp. We conducted the portages and returned via a windy St. Regis Pond, where we used the islands to block the wind as we made passage back to camp.

After a bit of exploring and taking in the views, we had dinner and sat around our rip-roaring campfire. As Nancy went to bed, I paddled under the milky way and its reflection on the inky waters of St. Regis Pond. After rounding the islands in the darkness, I heard a chorus of coyotes as they howled into the night and made my way back to my chem-light launch marker.

May 5, 2008 - Return to Civilization
Nancy and I got up early, got packed and were on our way back to civilization before we knew it. We headed South on St. Regis Pond and over to the portage dock. I carried my canoe over with my heavy pack and my fleece on which was a bad idea (overheating). After a few moments rest, Nancy and I returned to get her kayak. Once on Little Clear Pond, we paddled to the West up a cove and to Bone Pond. A real nice treat with mergansers, geese and turtles all residing back in this little pond.

We then headed back to the parking area on the southwestern end of the pond. We got loaded up and headed over for a few nights camping at Fish Creek Pond campground.