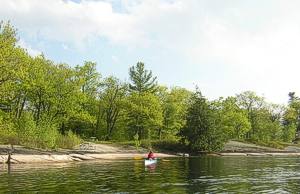 We had originally planned a week-long kayak camping trip to Cape Lookout in North Carolina, but with thunderstorms moving in for the week, we had to make a last-minute adjustment. The weather in upstate New York looked good so we headed north to the Thousand Islands area of the St. Lawrence River, then to Mystic, CT, and then to Fire Island, NY.

One of the biggest challenges in kayak camping in a new area is figuring out where to stay. The Canadian government has set up a wonderful paddle trail in the Thousand Islands region and put together a detailed, free paddling guide at www.paddle1000.com. This guide makes it very easy to figure out how to paddle on the Canadian side of the St. Lawrence. It ends up the Canadian side is the side to paddle on since everything on the American side is privately owned and there are no islands that are open for camping. On the Canadian side, the government has reserved a large number of islands for public use.

We launched from the public dock in the small town of Morristown, NY. The launch facility is a boat ramp and there is no fee for launching, just park on the grass to the right of the bath house as you face it from the water. We originally chose to start at this end of the river since we would be paddling against the slow current, meaning we would get a little extra push on the way back. This area of the St. Lawrence is home to the Brock islands, which are directly across from the town of Brockville on the Canadian side. We brought our passports for the trip, but never needed them since we never came across any ICE or Canadian customs personnel; some of the locals told us that it's a good idea to have the passports on you anyway, mostly since US ICE can be strict. 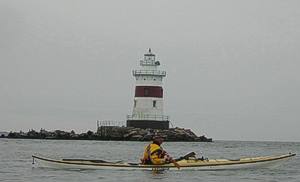 We took a short paddle to check out Skelton Island, which ended up being too steep and rocky to land on, and the promised dock wasn't there. After a short paddle to Refugee Island, we chanced upon several perfect camp sites on this beautiful island. The cost for staying on the island is $25 Canadian, payable at a self-service kiosk on the island; there are picnic tables and two pit privvies.

We quickly discovered that this island is directly on the international shipping channel, which is an important aspect of paddling on the St. Lawrence. This is the seaway from the Great Lakes to the sea and Great Lakes freighters regularly ply the waters moving quickly and silently through the channel. The channel is easily identified by the tall white pillars in the water and is clearly marked on the paddle trail guide, and should be avoided or crossed quickly.

Another important aspect of paddling in this area is the water temperature; it was listed as 50 degrees F, but seemed significantly colder since the ice doesn't fully melt until April. We wore drysuits the entire time, despite some beautiful weather. The Thousand Islands area is nearly deserted during the off-season and during the week, but it becomes very crowded at the height of the summer according to the locals, so this could be a major consideration for finding a campsite when competing with power boaters.

We set up camp on the rocky island, which is dominated by Canada Geese and the occasional Pileated woodpecker. The scenery was beautiful and the freighters zooming silently by actually added to the experience. The next morning we set out for the next leg of our journey and found high winds that had not been predicted by NOAA or the Canadian Weather Service. We gamely tried to plug away at about one mile per hour, but between the wind and the current, we just weren't getting anywhere. We got about 1/2 of the way to our destination before we decided that it just wasn't worth the next seven hours of paddling to get to the next set of islands, so we turned around and almost flew back as the wind, current, and following seas pushed us quickly back to the Brock Islands.

We investigated each island in the chain and found that Refugee, our original spot, was actually the best of the bunch, so we camped again that night. The prior night's silence vanished with the week and the Canadian side of the channel blared music throughout the night. The lesson to be learned: this area of the Thousand Islands is great during the week, but noisy during the weekend.

The next morning we broke camp and headed back to Morristown with the intention of driving towards Lake Ontario and paddling out to Mulcaster Island, a purported gem in the Navy Islands area of the Thousand Islands. We weren't disappointed. This area of the St. Lawrence River is so broad (more than 6 miles across), and is so replete with islands, that it ceases to feel in any way like a river and feels more like paddling on a large lake or off of an ocean coast. We launched from the town of Clayton (a place that seems almost wholly set up to service the tourist trade). There is a town dock that has temporary parking spaces for offloading and restrooms. There is no cost to launch and the best place to park is on one of the side streets in the town that does not have a meter.

The paddle to Mulcaster was beautiful as we paddled across broad stretches of water that were churned up by a stiff wind, making for a fun and more challenging paddle. This paddle took us through the narrow channel between Grindstone and Picton Islands and we found ourselves traversing beautiful bays filled with turquoise water. The area reminded us of nearby Lake Champlain and Mulcaster Island was beautiful, with well-kempt walking trails, a clean and well-stocked pit privy, and amazing views. The northern-facing rock beach we landed on is the only place that really works to land a kayak unless you use the docks. During the season (Victoria Day to Thanksgiving) the cost to stay on the island is $15 Canadian. The next morning we had a placid paddle back to Clayton, loaded everything back up and headed on.

Marinas with kayak-friendly launching available at both sites. See the description for details.

Camping on Canadian Islands costs from 15 to 25 CN dollars per night. Bring your passport just in case.

Full Garmin waypoint files and Google Eath overlays are on our website: www.brkayak.com.