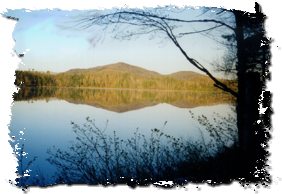 Looking on the map, finding the road into Somerset Reservoir looked to be a challenge as it is marked as about 10 miles of unpaved road. I had driven VT 9 on several occasions and there are so many unmarked dirt roads crossing the road. On the positive side, I was thinking I wouldn't have much boat traffic on this roughly 8.5 mile long lake (actually much bigger than the 8.5 mile longest length would suggest as there are two fingers and quite a bit of river estuary on both fingers.

The dirt road described was in much better shape than I expected as in places it was paved. Finding the road (Road 71) was a bit tricky as there are no markings on Route 9 along the road. The best way to find the entrance is to count off 2.1 miles due east on VT Rt 9 after VT Route 8 cuts off to the south between Bennington, Vermont and Wilmington, Vermont. There aren't too many confusing points on the rural road until the last couple miles where the road appears to go off to the left markedly. Instead, make the right turn (there is an "Apples for Wildlife" sign) and in about 2 miles the road ends at the kayak launch just past the boating launch. If one was to make a left on the last choice I mentioned - that road to the left is a rather sizable no-fee Federal Forest campground. There were about 40 groups camping on Columbus Day, and room for about another forty by the size of unoccupied areas. Some sites are enormous looking to hold 10 cars or more. The area is a great long weekend destination as another very sizable lake to explore is close by, Harriman Reservoir, a couple miles west of Wilmington, VT that is also mentioned on Paddling.net.

The Somerset Reservoir is surrounded by National Forest land, and there isn't a cottage on it. There are stunning views of both Stratton Mountain, one of the higher points on the AT in Vermont and Mt. Snow Ski resort.

There are remnants of campsites on the six or so islands I noticed and along the NE branch of the lake. I saw no boat traffic at all. There was a large group of about 15 kayakers who passed me by as I paddled upwind into a stiff north wind. The stiff 25-knot North wind was creating 2 foot rollers coming down the breadth of the lake as the lake aligns due North South. I hoped the wind would hold for my return trip, as it was the kind of day where the wind can add 3 knots to your speed without breaking a sweat. 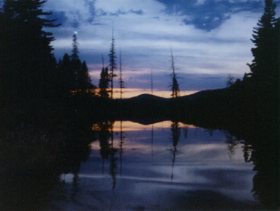 The lake was a perfect choice for circumnavigation. I picnicked on Street Car Island. The reason for the name of the island will be left a surprise for those who visit to wonder about.

The pine top terraced Mt Stratton was spectacular when surrounded by the color of autumn in the oaks and the birches. I am guessing that it's a beautiful sight any time of year. This is special lake for both the pure majesty of the scenery of the surrounding peaks add to that the down home country warmth of the people in the region and the people who are visiting the region and you will leave this place with a smile on your face.

I left it wanting more of the same and I returned the following weekend to try the Federal Forest Campground, which was deserted, with plenty of dead wood around to cut and burn in the fire rings. This is a very special place, as it appears so very very remote when paddling, although it's a relatively short drive from New Hampshire, Vermont, Massachusetts, or Connecticut.

There is Federal Forest No Fee Campground within a couple of miles, or a Woodall State Park Campground about 14 miles away (fee)

None if camping at the Federal Forest Campground

Take Road 71 North from VT 9 between Bennington and Wilmington 2.1 miles east of the intersection of VT 8 and VT 9.