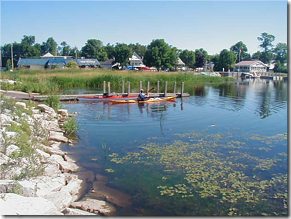 LES CHENEAUX ISLANDS:
Arrived at Cedarville and found a great public boat ramp to launch for the trip to Government Island in the Les Cheneaux group. Planned to stay overnight, but the 6 mile paddle out was so quick, and there were so many campers already on Government Island that we just circled the island and had lunch, returning to the car to drive to Sleeping Bear Dunes on the east coast of Lake Michigan.

SLEEPING BEAR DUNES NATIONAL LAKESHORE:
Drove into Empire around 6pm. The Visitor Center was closed, both campgrounds (D. H. Day in the north, Platte River at the south) were filled with very high-density campers. But we received a listing of all public campgrounds in the area from the Park Ranger, and selected Platte River State Forest Campground to stay. It was remote, wooded, cheap and quiet. Again Golden Eagle card got the $10 campsite for just $5. Good choice! 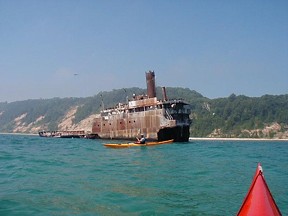 Wednesday morning we packed up and headed for the small town of Glen Haven, just north of Sleeping Bear Dunes National Park. They had a great beach launch spot, and a good place to leave the car (by the old Boat Building Barn Museum). Loaded the kayaks and took off for the 8 mile paddle out to South Manitou Island. GPS directed us right to the Weather Station Campsite, and we were able to select the best site on the island (#10 on a high bluff overlooking the lake and Sleeping Bear Dunes). The island is only 12 miles around, but has an amazing diversity of sights. We paddled a short distance up the west coast from our camp site to see the steel freighter wreck lying just off shore in shallow clear waters. The Francisco Morazan went aground here in a storm in 1961, and the superstructure still towers above the water. Further north are the 300 ft sand dune cliffs, with broad sandy beaches for lunch and rests.

Thursday we paddled around the island, going counter-clockwise by the 1871 lighthouse, the ferry dock (with additional campsites), around Gull Point on the east, and up to a third campground at the very northern tip of the island.

Friday, Saturday and Sunday were spent exploring the island forest trails, paddling, and eating three huge meals a day. Had great sunny, warm weather for the entire trip, but did have thunderstorms, lightning, and rain Sunday night before we left. Expected the worst for our Monday return, but were able to scoot across quickly that morning, although with a very heavy broadside and then frontal wind/waves (30mph, 4-6 foot waves that frequently broke right across your face). It still only took us 2 hours to do the 8 mile crossing, and my GPS registered 8.5 maximum speed during one of the few surfing opportunities.

All in all, a fantastic "perfect kayaking trip" that will be long remembered! I rate this as one of the most scenic paddles I have done.

Pictures of this trip can be seen at http://community.webshots.com/user/johnsonkw1