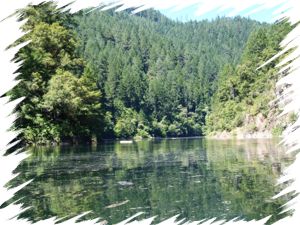 It was a bit straighter than the 8 miles (or so) of Forbay Road's one-lane winding asphalt passage to the eastern put-in�though not by a lot. It's like a 4 1/2 mile long mythical Greek Serpent slithered through the steep "V" canyons of the thick Eldorado Wilderness until it came to rest upon a stretch that felt kindly to its slithery shape�Then it morphed into Slab Creek. Officially marking 1850' on nature's topographic map (although the water level does vary from day to day and source to source). Mythology aside, it's a dammed up section of the American River's meandering North Fork.

Her surface is sparsely decorated with naturally occurring pollen and forest debris. The lake is limited to human-powered water craft (paddlers rejoice). As is habit for us we collected what litter we found. There was such a small amount we could count it on two hands with fingers to spare.

The near sheer drop of the canyon walls offer end to end carpets in a thick mix of subalpine flora. This included everything from tiny and colorful wild flowers (nearly hidden from view), to tall and imposing redwoods and pines. Bordered above by a towering tree line, and below by overgrown angular rock formations that offered occasional salvation to the smallest of plants. These tapestries dwarf visitors and can leave them with a feeling of vulnerability and isolation (barring a few expensive houses that sat atop one of the western ridges). We once took a float down Topack Gorge on the Colorado. This has much of the same intensity, but with an overabundance of plant life, slightly angled walls, and no real current to carry you (so paddle-up). 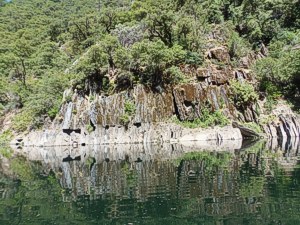 Should you capsize in this clear mountain lake, you may have to swim a few hundred yards in seriously cold water just to claim a small perch... while waiting for someone to notice you missing. Since the mountain slopes and cliffs go straight into the water, there is no shoreline to use for a take-out except at the two ends.

At least while we were there, we were completely alone 95% of the time. It felt as remote as any High Sierra Mountain Lake we�ve visited. Sadly though, cell phone coverage, though horribly spotty, is available (my wife�s phone started ringing about 2/3rds to the dam). A cruel reminder as to just how much the �civilized world� is challenging our hard earned self reliance.

In the still sunlit waters, millions of small flying daredevils teased the local fish population. Holding no more than an inch above their buffet table, and in constant eye catching motion. These miniature morsels produced what looked like a layer of smoke from a distance. In fact, they probably kept the trout so well fed, they would be too fat to swim after your lure. The lake has fish, but hardly any fishermen. We saw fish in the water beneath our paddles. We also saw a girl catch (and then lose) a fish using nothing but her fishing pole and beginners luck. It was her first fish and she was excited.

We toured the serpent from head to tail, exploring and photographing along the way. Small streams and an occasional waterfall lined the banks. We ate lunch at one such water fall. It was very nice, but the forest didn't yield us more than a few square feet for our mission. We tied our Wenonah Itasca canoe to a half submerged fallen tree and waded to our improvised kitchen for food prep and consumption.

The day we were there, it was in the upper 90's and the serpent was lazily sunning itself. Clearly, as with any sizable mountain lake, this snake could strike or strike back (as was punctuated with some of the debris). But for us, on this day, it was glass turning to diamonds as we went westward. [Diamonds is a sailors' term for a sparkling water surface caused by breezes around 3 knots]

We planned our trip with the anticipated winds. In the afternoon they were out of the south west. Our return trip took roughly an hour and fifteen. We had a persistent breeze forming little cresting waves that didn�t actually break (so about 5 knots). Covering the distance was easy, even with some additional photo ops. However, the incoming American River was running counter to the wind, so there was a noticeable undertow trying to push our bow off course while the stiff breeze encouraged us forward. Anticipating these feuding forces was the name of the easy return in our hard tracking canoe. Many large pieces of driftwood found their happy spot between the two and simply remained in one place as if mooring. The sides presented large visuals of the wind/water confluence eddies. They were ringed with a lace of floating pollen and small forest debris.

About a mile or so east of the dam, you can see where an ancient trail was cut into the canyon walls and crossed the river. I've read this is part of the Pony Express Trail. I was unable to confirm this, but it was interesting none the less.

The east end of Slab Creek Reservoir is located just outside of Pollock Pines, accurately self described as a four season sportsman�s paradise. A small and very much alive town embedded along the famous Pony express Trail. A few miles to the west lay Placerville. Probably best known for its part in the gold rush era and hanging people (i.e. "Hangtown" or "Old Hangtown"), Placerville is a much larger town, I suppose it could even be called a city. Between the two is the sleepy apple country town of Camino. Halfway between Camino and Placerville is the access for making your way to the west put-in.

When we first arrived, it was mid morning and there were campers along the north shore. Torn targets, broken clay pigeons, and spent shells littered the put-in, along with old camp fire remains and broken beer bottles. Some of the campers looked highly questionable and seemed to take a real interest in our setup. Since at the time, we were the only day visitors at the put-in, I took pictures of them watching us and also took pictures of some of their cars' license plates. By the time we put-in, they had lost all interest in us. Upon our return, they were very neighborly. Would they have bothered our stuff without our returned interest? I'll never know, but we didn't hurt to cover our butts.

Aside from the campers, we saw two SOT kayakers ("Sit-On-Top" for the newbies) putting in as we departed... and lost all sight of them after we rounded the first bend; two more SOT kayakers going west on our return trip; and an aluminum power boat transporting a crew that were working on the dam. My research suggests that this lake drops over the summer, so the west put-in is best at low flows. That's when the east put-in becomes a short walk from car to water. On this trip, we parked right next to the water's edge to load up. It turned out to be a near perfect paddle on Slab Creek Reservoir.

NONE once you leave Pollock Pines.

In Pollock Pines there are several places to eat, a Safeway, a True value Hardware, and two gas stations. There are many other services as well, and all of the locals seem to be very friendly and helpful.

None, but it is First-Come-First Served AND at your own risk

Google Earth and an internet search