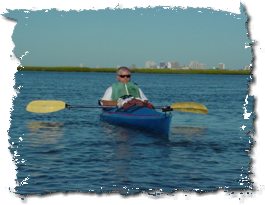 8 members from the Jersey Shore Sea Kayak Association launched into the Intracoastal Waterway in Atlantic City. After a quick stop for lunch on the outdoor patio of the WonderBar just a few hundred yards ahead, we started out on our journey at about 2:30 pm. We paddled through the intracoastal alongside the coast of Bader Field Airport into the Beach Thorofare and eventualy through the waters of Shelter Isle. As we approached Shelter Island our crew dwindled; One paddler decided to backtrack to the takeout while two others opted to return to the landing via the nearby west canal of the intracoastal in Ventnor Heights.

As the rest of us continued, I navigated using the coordinates and map on my Garmin GPSMap76 as Joy studied the nautical chart laid out on the sleek shiny wood deck of her 19 ft Besty Bay kayak. The weather was sunny & hot and a slight headwind and lots of water kept us from overheating in the sun. In one area near Shelter Island, the water got a bit low and we ended up dragging a few feet back to the deeper water. No big deal. There were very few boats in the water and it was nice to feel like we had the entire waterway to ourselves.

After about 7.5 miles, we made it into the entrance to Skull Bay. The bay was a small body of calm water, surrounded by tall marsh grasses and with a few narrow entrances. The area was borders the small town of Linwood and the Linwood Country Club on the western shore and also provides a wide open vista of Atlantic City skyline above the marsh grasses to the Northeast. It was very peaceful and as we entered it, we took a break from paddling and absorbed the silence. Joy absorbed a bit more, and deciding it was time for her ceremonial swim, she exited her boat and plunked into the peaceful waters. Joe and I shot some pictures. 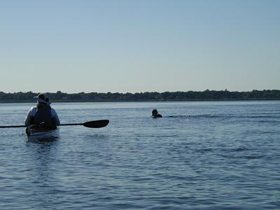 After a bit of floating on quiet Skull Bay we charted our course to exit and headed out near the Risley Channel, catching some swift but fun currents and boat wakes as the tide rushed in from the nearby Great Egg Harbor Inlet. As we rounded Dune Island and paddled along side of Pork Island, we cruised with the tidal current at speeds of 7 and 8 miles per hour. It was an incredible ride and I really didn't realize how fast I was going until I checked the GPS and looked at the rapidly moving shoreline. As the sun began to set we made our way back towards Shelter Island and Jonas Island. After a few miles we took a landing break on small beach near the Viking Rowing club trailer near the entrance to the west canal of the intracoastal waterway. As the no see-ums attacked we quickly got back in our boats and headed north up the intracoastal as it began to get dark.

After a great Journey to Skull Bay and 16.3 miles of paddling, we all landed safely back at the ramp at about 8:15 pm.

After loading our boats we trekked two miles into Atlantic City to Los Amigos Mexican Cantina where we had some dinner and a couple of pitchers of frozen margaritas.

The WonderBar & Grill is just a few yards beyond the Albany Ave Bridge near the launch site provides a floating dock to land your kayak. Their outdoor patio bar is a great place to stop off for a cold drink or have lunch on a hot summer day or night.