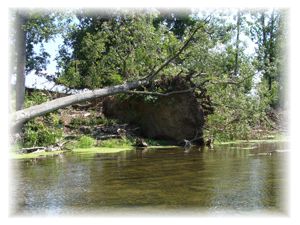 My wife, Olga, and I enjoy canoeing and kayaking, and we have been on the Shenandoah many times. This time we went in at Elkton, VA, and went downstream to the Shenandoah Dam exit point, in Shenandoah, VA. We used Shenandoah River Adventures, whom we have used several times in the past. They give personalized service, reasonable prices, flexible times, good equipment, and informed people to talk to. I recommend them above other companies I have used, but they are all pretty good.

The water was fine, a bit low because of the drought there, but no serious problems. However, about a half hour downstream from Elkton, a dark overcast developed. It started pouring cold rain. No real problem, we have been hit by rain the previous two times out on the Shenandoah, so we just sang some songs to keep spirits up and kept paddling. We noticed everyone else was pulling off the river, but we figured we were tougher than they were. Then church bells started ringing, and we just figured some poor soul was in a funeral, and had bad weather for it. Then the winds came up really strongly, and almost made it impossible to paddle downsteam - they were blowing upstream. This went on for about fifteen minutes, and we just kept going. After a while the rain stopped. When we got out, the outfitter told us there had been a tornado in Elkton, about a half hour after we put in. Talk about luck! Getting sucked up in one of those while in a canoe with nowhere to go -- scary to think about it.

Two weeks later, my cousin Sten Johansson from Stockholm was vacationing with us, and since he is an expert kayaker, we went down the same river. He took some pictures of the devastation there. Trees were down all along the river edge, starting at Elkton downstream for about two miles or more. Large trees, uprooted, lay in the river with their leaves still on. Now we know what a tornado can do. By the way, that trip was very pleasant, no rain, no tornado, just a nice afternoon on the Shenandoah.