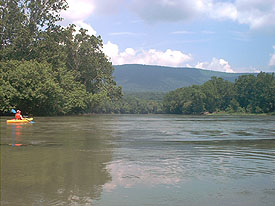 I researched the net for places with water in the middle of July, and within an 8 hr drive. The Shenandoah River south fork continued to show good water. Having been on trips where the water is so low that it could do serious emotional damage and scrape off years from the life of a good trusty boat, this was a relief. As a matter of fact the constant watching of the gauges on the internet showed them to be up about a foot from normal summer levels. If they had been at regular levels this would have been a much less enjoyable trip. As it was, this was ideal water for a boat loaded for a three day trip. I had the cookware, stove and food, tent in a 12.5 Dagger Blackwater. My girlfriend had the sleeping linens, pads and extra clothes in her boat, an 11.5 Dagger Blackwater.

We arranged for a shuttle with a local outfitter and paid in advance. After driving for 8 hrs from Louisville, KY, the outfitter decided they had not charged us enough. Well, that is not good business and did not go over with me at all. After listening to my side of the story they decided they would stick to the price already paid in advance. They claimed they might only rent to tubers in the future (oh well........dont offer a shuttle service then).

We enjoyed great weather the entire trip. The days were sunny and not hot(the rest of country seemed to be struck with a heat wave). The nights where ideal, nice and comfortable temps in the upper 60's.

The Shenandoah River is an easy paddle, mostly flat smooth going with occasional riffles. The easy class I and one nice class II-III (Comptons Rapid @ mile 17) make this a good river for a relaxing trip. There is private land flanking this river developed with either homes, gaudy mansions, or campgrounds. Campgrounds included both commercial and state parks. There is public land in some areas for back country camping in solitude, which included George Washington National Forest and Shenandoah State Park (undeveloped area). We chose the remote areas for camping. The second night our camp sight was absolutely beautiful. We had passed the Shenandoah State Park camp grounds and put in 18 miles that day. This was around river mile 35(mile makers stopped at 32). The river does a hair pin bend and then a few small islands are scattered over a mile or so. The resident Canadian Geese looked on. The spot we found was an old forest road way leading to the river and offered an opening in the mature forest. Hiking up a couple hundred feet we located an almost level, secluded opening. We harvested some waiting ripe blackberries and ate a nice diner before dark. After the Stars came out to shine, we were treated to a cosmic display hard to be found in anywhere. Consulting the astronomy book, my girlfriend helped me locate a number of constellations. The skies were clear enough to see the Milky Way. How could you ask for a better end to a day?

The wildlife on the river consists of a lot of Great Blue Herons, looking a bit like dinosaurs in flight, as well as the smaller herons and ibis. We did see more then one Bald Eagle along the way, either perched in a tree top or escaping down river to circle back. Also saw countless basking turtles.

We made a short visit to an archeological dig taking place in the George Washington National Forest. This dig has continued over several summers. They are looking for Native American trade artifacts from 1500's-1700's.

The back drop of the Appalachian Mountains made for very pleasant scenery. Although this is not by any means wilderness, our three days were very relaxing.

We finished the trip with 9 miles of flat water and uninspiring new construction of huge homes to bring us into the town of Front Royal, VA While waiting for our shuttle we witnessed a very casual and brief ceremony of Baptisms, and a dressier, bigger one about to start as we loaded our boats and climbed into the shuttle for our ride back to base camp.

We had a nice hot shower and a good dinner with a camp fire later. Early next morning around six O'clock, I made my way to the mens room and on my return to the tent I watched as a fully grown black bear ambled thru the campground scattering some sloppy campers diner plates and scraps from the night before. He walked within a few yards of my tent and did not even turn his head to look at it. Yogi did not even go over to the blackberry bush, just look'n for leftovers.

Later that day, we drove into Luray, VA to go to the Laray Caverns. WOW! What a very colorful cavern! This is a commercial cavern with guided tours lasting about an hour. The chambers were large and the cave was full of various types of decorations and a reflective lake. Certainly worth the trip to see all the formations and colors.

We reluctantly headed home after a brief drive through the Shenandoah Valley, with plans to return for an extended hike along the Appalachian Trail.

We used our tent and it was wonderful to wake up in the morning to the birds and coffee out in outdoors.

Dagger Blackwater 12.5 and 11.5. Great match for long weekend trips with room to spare for longer trips.

No Fees are required to camp in a National Forest, unless in developed campsites. We found two nights of camping on the river with no fees.

We took I-64 from Louisville, KY thru West Virginia into Virginia and then north on I-81 to New Market (VA 211). VA 211 over the mountain and into Luray.

We did use maps that we downloaded from a couple of the different outfitters. These helped to show the private land from the public and the locations of rapids. Rapids are an overstatement in most cases, except for Compton's. In high water the wave train is a class III.