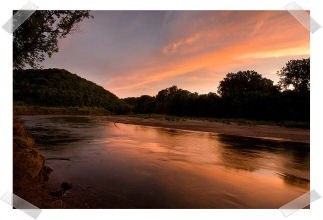 My grandparents live near the Root River so I've been doing chunks of it off and on for years. But last summer my cousin and I decided to run the whole thing. We opted to start from Preston on the South Branch. The South Branch to its junction with the main branch is clear, cold and quick. It's a lovely little river that probably gets quite rocky by mid-late summer. It is also a good trout stream.

We stated late morning and reached the Lanesboro dam by late afternoon. Now the guidebook says there is a short portage to the left, but that's bad information. The portage requires a longish carry through the city park/campground, down the street and to the parking lot below the dam. This wouldn't have been a bother, except that we were using a flat-backed aluminum monster of a canoe. There is camping at this point, or a take out spot. Although if you stop there, you miss on the short and fun stretch that goes through the scenic little town. On this segment we experienced the roughest water on the trip. Two foot standing waves the color of froth and sapphire. A couple miles downriver the South Fork meets the middle and you say goodbye to the clear little trout stream.

Another good option to get to this point is taking the North Branch from Chatfield (it will soon merge with the Middle Branch). The North/Middle branch is longer and passable at most any water level. It passes through forested craggy valleys and has big populations of bald eagles, herons and kingfishers. There are several nice campsites and the river passes the ruins of a hulking stone power plant that once yielded electricity by funneling part of the river through a tunnel in the cliff.

When I was on the river last summer, there had been two major floods within the last year. One of them had wreaked massive damage on several river towns and was the worst flood on record. The floods had left behind hundreds of snags and wiped out campsites downriver.

We camped the first night at an unofficial spot shortly after Whalan. The water was still high from the most recent flood and the next day we found ourselves making faster progress than expected. Bends are where the snags gathered. At one such curve we encountered dozens of dead trees and had to struggle to find a few foot opening to eek through. On a practice run the month before wed launched upriver from Chatfield and on a tight turn, with faster water and only a fraction as wide, had caught the end of a strainer on the cumbersome boats keel and dumped. I caught the canoe and looked to where my cousin should have been, but could only see the bottom of her shoe. After what seemed like far too long, she came popping out. That little trip killed both our phones. 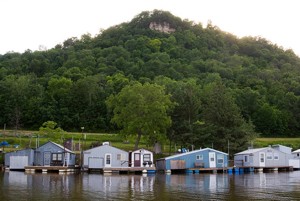 Wed planned on spending three nights, but as the second day swept by, we started leaning towards two. The river goes near the tiny town of Peterson and we stopped to find some sandals for my cousin. Its a cute clean little town with a cafand outfitter. Later in the day we couldnt find the campsite we were shooting for and settled on a beach. The next day we realized the campsites had washed out. We stopped for lunch at one where a sign remained and had to clamber up an eroded several foot mud bank and found no signs of table or privy, only grazing cows.

Passed the town of Houston the river is channelized. The straightness eliminated the strainer fields, but robbed some of its character. I feared reaching some bend and finding an impenetrable, veritable forest of deadfall, but there was no such thing. After passing under Highway 26 the river passes three miles through swampy and interesting Mississippi River backwater. After several miles on the Miss we ended at the public landing in Brownsville. The Mississippi here is sandy and has numerous islands, though there were many pleasure boaters and wind was kicking up a fair chop.

Miles:
Preston to Whalen, 18 miles (or 35 from Chatfield to Whalan)
Whalan to the Mississippi, 54.5 (plus several on the Miss)

Take Highway 52 from Rochester or the Twin Cities to Preston.