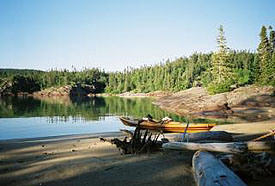 There are two places you can begin and/or finish a kayaking trip of the Pukaskwa coastline. Either you start up at the Northwestern corner at Hattie Cove, or down on the Southeastern access at Wawa. As the crow flies there is 100 miles of Coastline between the two and no other points where you can launch in between. The park covers over half the coast starting at Hattie Cove and the balance is Crown land.

The coast is exposed to the worst lake Superior can dish out and most of the way you are exposed as you paddle this harsh and wild area. The shore is almost all granite and volcanic rock with very few friendly places to safely land and launch from. The sand areas are in coves and bays where rivers enter the lake.

I started paddling at noon from Hattie Cove in 1 meter rollers coming from the West and a South wind, and soon had 1 meter waves coming from the South as well as the rollers. It was a challenging paddle and too rough to enjoy the scenery. About 8 miles down the coast I paddled into the Willow river cove that had a nice sand beach. There I took a short swim in the river that was much warmer than the lake and fixed up something to eat. It was about 3:30 PM and I wasn't planning on spending the night there, because there was a problem bear in the area according to the rangers. Three other kayaks pulled into the beach also, and then this big black bear came out on the beach to check us out. This worried us because the bear was approaching us in the middle of the afternoon!

We shouted at him waved pieces of wood we picked up for clubs, but he didn't go away. We quickly loaded up and got out of there!

I paddled another 7 miles down to Oiseau Bay and found a small beach there to camp on. The entrance of the large bay has some islands and shoals that protect it from the open lake. That night the wind blew hard and didn't let up at all the next day, in fact, the gust were over 40 knots. It was impossible to paddle in so I stayed there for another day reading, hiking, writing, eating and sleeping.

The next morning the wind was under 20 knots, so I started paddling South again in rollers and waves of 1.5 meters. By noon the waves were less than 1 meter, but heavy fog moved in with visibility going below 100 meters.

When I arrived at Cascade Falls I could hear the falls but couldn't see it until I was quite close to it. I pulled out next to the falls and prepared to camp for the night. The Cascade River drops over granite cliffs directly into Lake Superior - definitely the highlight of the trip! About 7:00 PM the wind changed directions and blew the fog away allowing me to enjoy a beautiful evening there.

I woke up at dawn the next day and it was clear and calm. By sunrise I was on the water and making the most of the day. By 1:00 PM I had paddled around Pointe La Canadian, past the Pukaskwa river (the Southeast border of Pukaskwa National Park), and was taking a break at the Wheatbin (a large gravel beach). My goal for the trip was to get down to this area and then head back up the coast again to Hattie Cove where my truck was still parked.

The day was beautiful and relatively calm so I went hard at it all afternoon. My experiences on Lake Superior have taught me make the most of calm days! I made it back to Cascade Falls before sunset to camp there again - a day of aver 40 miles of paddling.

The next two days were also really nice and I paddled steadily back toward Hattie Cove, however, with such good weather I took time to really enjoy the area: paddling around stark and bare granite islands, swimming where the rivers entered the lake, climbing up granite cliffs, taking pictures and enjoying the solitude.

I didn't use an outfitter, and did a solo trip. I paddled an 18' by 22" strip-built sea kayak - a panache design I built from plans I purchased from Laughing Loon.

You are required to sign up and pay for backcountry camping, and report out when you leave.

The Hattie Cove entrance to Pukaskwa is located off Highway 17 about halfway between Thunder Bay and Sault Ste. Marie.

Guide to Sea Kayaking on Lakes Superior and Michigan