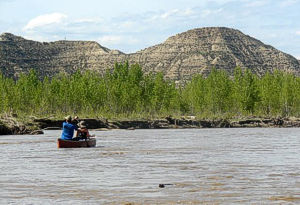 This was really a "weekend" trip that happened on a Wednesday & Thursday due to work schedules, although the River would have been as deserted at any time. We had never canoed a "wild" river before, so we wanted to try it first during muddy high water & maybe return later when the water would be clearer and lower.

Typical flow for this time of year would have been a shallow 500 CFS but we calculated that a small flood (the "Pulse") from a Monday, May 16th rainstorm would hit the I-90 Rest Stop Launch around 3:30 AM on Wednesday. Accordingly, we three were camped by I-90 Tuesday night waiting to ride the floodwaters fifty miles down to Arvada, Wyoming!

Despite some initial tail-slaps from a vengeful beaver during set-up & chunks of shoreline noisily caving from the nearby bank all night long, we were all soundly asleep when the 1,100 CFS Pulse passed by.

After waking at 6 AM & brushing the frost (it's Wyoming) off of our gear, we made our introductions & then started the 32-mile shuttle north on the well-graded & graveled Upper Powder River Road. After scouting the take-out at the Arvada County Bridge Launch just south of town, we parked one of our pickups at the Arvada Post Office & returned along the same route. This road, running from fifty yards to one mile west of the River, had virtually no night traffic but by day was frequented by operators of the hundreds of Coal Bed Methane wells in the area, & also by local ranchers, making it a good emergency escape route.

At 9:00 AM Wednesday, 5-1/2 hours after the peak of the Pulse, we made one last "use" of the Rest Stop facilities before launching. The tap water at the I-90 Rest Stop had an unpleasant taste � probably due to sodium carbonate. Since Sodium Absorption Ratio (SAR) & specific conductance (hardness) of the River water actually increased during the Pulse, even filtered river water would have tasted worse than the rest stop's shallow well water � with foresight we had brought our own!

We put-in while standing on some turf blocks caved off from the three-foot tall cut bank, noticing that the water had already fallen an inch or so from its maximum height. Within moments of heading downriver a small beaver crossed our bows & then followed behind for 20-30 yards � a good omen, I thought. 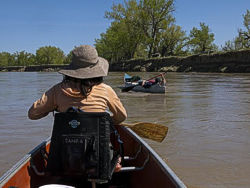 I was soloing in a 17-foot Grumman Standard aluminum 70ish "Tin Tank" while the other guys tandem-paddled a 17-foot Coleman "Ram-X" red polyethylene canoe made in the 80�s. These larger volume canoes kept both boats off the shallow bottom even when loaded with camping gear, & combined with the evenly-matched endurance of both crews made the trip even more enjoyable.

The Powder River has a large & sparsely-vegetated watershed, particularly on the South Fork, & flow rates vary wildly with snowmelt & rainfall. Because of the strong & frequent flooding on the Powder, the channel is always shifting. Any suspended clay continues on to the Yellowstone & Missouri Rivers, leaving behind the fine white silt that gives the "Powder" River its name. Virtually no clay or rock can be found anywhere in the riparian zone, & it takes a deliberate act to stick a paddle blade anywhere in that firm, sandy river bottom.

It was obvious soon after launch that the River was simultaneously "planting" new trees on the shallow point bars even while eroding away the older trees along the cut banks of the outside bends. Luckily, cattle had occasionally cut steep ramps through the vertical shoreline which made access to shaded picnic or bathroom spots a lot easier. Hidden beneath the bank-to-bank muddy water was an even more meandering channel � our paddles would often hit sand a few inches down on one stroke, hit nothing on the next, & then be back to mere inches on the third!

The river seemed faster, noisier, & with more boils than you'd expect from a river dropping only five to six feet per mile � perhaps the Pulse lacked enough time to re-structure the river bottom to the temporarily-high flow. The speed of the Pulse between the Sussex & Arvada gages (120 miles) was 3.24 MPH, compared with our average canoeing speed of 4.5 MPH the first day & 4.2 the next. The average water temperature was around 60F.

On the first day we saw maybe a half-dozen antelope in groups of two or three, three deer, & two beavers that bailed out their holes in the bank so quickly that I initially mistook them for caving chunks of bank! There were a couple of bald eagles, a few soaring hawks in the distance & a grey Prairie Falcon hunting low between the trees. There were many Canada Geese honking continuously from their nests on the bank, or making short decoy flights before circling back. There were hundreds of cattle, mostly Angus and black baldies (a Hereford-Angus cross) all lowing as we paddled past, plus at least one flock of sheep. Finally, there were small purple flowers, sometimes masses of them, embedded in every meadow above the River - probably Lewis Flax, which blooms from mid-May to September & is excellent cattle fodder.

Around 7:00 PM, or thirty-two miles & eight net hours of paddling later, we made camp on a soft, sandy bank near the confluence of a dry braid & the main River, twenty feet away. The daytime high had been 70F, & with no wind or insects, we again slept well, serenaded by the still-caving banks, & later, the sloshing of two cow elk crossing the River by moonlight twenty yards upstream of our camp.

The mercury had climbed to 50F by our 9:00 AM launch on Thursday, & three or four miles into this second day the River widened & slowed. The remnants of trees cut out of the banks & anchored in the sand created obstacles more reminiscent of rocks than wood, & this slow stretch had many more of these than before. Both days, however, saw numerous partially drowned trees & stumps in the water. 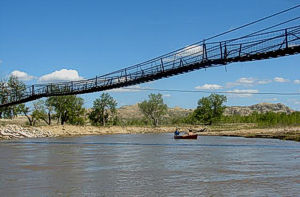 We passed under two foot-bridges, & actually saw one being traversed by a camo-clad turkey hunter on a four-wheeler. When we tied up for lunch there was a set of raccoon tracks in a rare patch of wet clay by the boats.

Because of the high water we missed the livestock fences that would later be strung across a much shallower River, but we had to avoid or scrape over sections of floating black polyethylene CBM (Coal Bed Methane) gathering lines exposed by flood currents.

The last ten miles of River were faster, narrower & rockier, with stronger riffles alongside rocky slopes & cliffs. The start of old-growth Russian olives showed that the banks were stabilizing, & four whitetail deer paralleled us for a hundred yards or so through this cover a few miles above Arvada. The air temperature was up to 80F by 2:30 PM when we ended our trip at the county road bridge.

The contract mail carrier for Arvada had shadowed our progress for a few miles & hailed us from the bridge as we landed. He owned a kayak & mentioned that the Powder River ran clear but much shallower during the summer but had risen to within a foot of the bridge span during the previous spring. (A later check of USGS gage records showed 14,000 CFS on May 27, 2016!)

We took out on the southwest end of the County Bridge (Atoka Street/Wild Horse Road) below Arvada, where the bank was steep but not cut. We had spent 4.75 hours paddling between 9:00 AM to 3:00 PM while covering an additional eighteen miles. Figuring in an extra 10% distance to stay in deep water made our average speed about 4.2 MPH.

The current at our take-out was fast right up to the bank, so my friends helped me get beached before dragging both boats up on shore. I walked the 0.2 miles to the post office to collect the truck I had parked the day before. We then drove back to the I-90 Launch to pick up the other truck. A small thunderstorm we encountered failed to slick up the road, confirming its reliability in bad weather.

After returning with both trucks 90 minutes later, we pulled our boats 25 yards up to, & then under, the right-of-way fence by the southwest bridge abutment where both trucks were now parked. Following a farewell to the other crew, a quick scout of the State Highway 16 Bridge four miles north of Arvada found that a take-out there would require a fifty-foot vertical climb & a one-hundred yard traverse just to the right-of-way fence. All this would be on private land with no nearby parking & fully visible from three nearby ranches � making the Arvada County Road take-out upstream far more preferable.

Wildlife would be more concentrated along the River during the dry summer, but you wouldn't see other boats in any season. In fact, the turkey hunter on the footbridge & the local postal contractor/kayaker welcoming us at journey's end were the only humans we saw in fifty miles! The flax flowers in full bloom made many meadows a spectacular purple-blue carpet overlying a bright green pad � an unexpected bonus!

While the constantly-shifting river makes a satellite GPS necessary to locate the few BLM tracts that actually contact the water, the soft sand, extensive riparian forest, flowering meadows, and above all, solitude, make this the best camping river I've ever paddled. Unfortunately, the rapidly- changing flow rates make timing a float trip difficult for out-of-area paddlers, adding to the challenge, as well as the novelty, to "Floating the Powder". 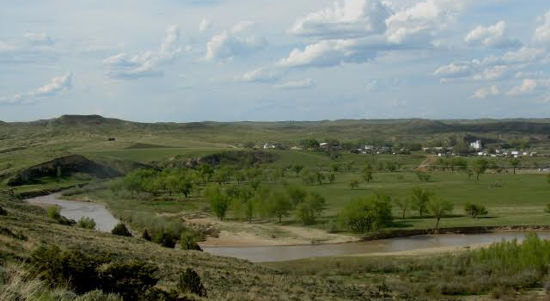 Sleep in your car at the I-90 Rest Stop, camp on BLM land nearby, or use the motels & commercial campgrounds in Buffalo and Gilette, Wyoming, both about 35 miles via Interstate 90 from the Launch. Camp on BLM land while on the River.

East from Buffalo, Wyoming 31 miles on Interstate 90, exit right to the Powder River Road, then turn left under the river bridges, continue past the Rest Area & immediately turn right, approaching the River over a large dirt parking lot. To get to Arvada, continue 32 miles north on the same Powder River Road.