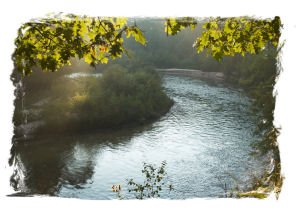 We got a late start that Friday afternoon, and hustled up the highway to Cadillac, then west to M-37 and Jim Horina's canoe livery. We had our own canoe--an 18 foot 1943 Grumman aluminum, a fat bellied beast of a boat--but we needed Jim to spot us on the river so we could drive away after Saturday's paddle.

The weather was gorgeous at 80 degrees and sunny, with the leaves just beginning to turn, though we were still three weeks away from peak fall colors. We put in at Elm Flats at 12:30, and proceeded on a leisurely five hour paddle down to Peterson Bridge. I say leisurely, in so far as we weren't in any hurry to go anywhere, and we stopped for lunch as well as several other times to skip stones, and once even to swim--the Pine River is spring fed, and cold any time of the year, or so I'm told, but it was absolutely frigid that day. But the trip wasn't leisurely in the typical Michigan river sense. Instead we were pulled right along at a brisk pace, often on category I rapids, and at times on category II. However, again, more typical of Michigan, the river meandered quite a bit, necessitating sharp turns performed at a quick pace, and that's where the moderate difficulty comes in to play. You really have to keep an eye on this river. Frankly, if a person weren't used to Michigan rivers and their like, one might find the Pine more than moderately difficult. There are a lot of opportunities to dump your boat, and of course, ours was full of gear, so we really, really didn't want to.

There's also a lot of dead fall that gets swept down river with the spring snow melt, where it fetches up against the bank when the river makes a sharp turn. If the river turns again, you can end up having to navigate 90 degrees through a gap as narrow as a yard and a half, with a mass of twisted branches on one side, rocks on the other, and all the river trying to get through at the same time. We got stuck at one of these places, I, really not wanting to dump the boat, managed to get it stuck instead, right before the gap itself. My co-pilot managed to work us free from the front end, and we shot through into our first category II of the day. What a blast!

We had a great time the rest of the trip to Peterson Bridge, seeing only one other person the whole afternoon (though we did see him on three separate occasions). Late in the season as it was, the sun went behind the trees lining the banks by 3:30, and by the time we pulled off the river at quarter to six, there were some pockets of air along the river that would definitely qualify as "chilly."

As we were finishing the day, watching for the campground and generally regretting our earlier dip in the river, I saw a sign on a nice sandy bank indicating the Peterson Bridge pull-out was five hundred feet ahead. I looked past the sign and saw a metal fire ring, and I called out to my partner, "We can camp right here!" And we did, within twenty feet of the river and a nice cascade of white water that started just past where we pulled out. The area was covered with oaks cedars and maples, and was very clean. 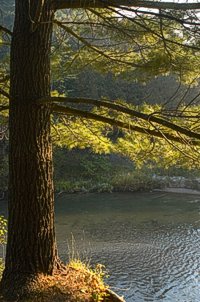 The Peterson Bridge campground is a rustic facility, but it had been recently renovated and looked fantastic. It also looked like they were building a bathroom with flush toilets, though it wasn't completed while we were there. Perhaps the best thing about it was the fact that no one else was there--we had the whole campground to ourselves.

We set up camp, started a fire in the fire pit, and eventually had a meal consisting of fried potatoes, onions and garlic with fillet mignon grilled over the open fire, and lots of fresh fruit (the pears were juicy and delicious). We washed it down with a six pack of brown ale--a nice touch on a chilly fall evening. All in all, we felt like kings. Later, we went down to the sandy beach and watched the milky way come out. On a clear night, the stars up north are amazing. We turned in around 11 and slept soundly with the calming sound of the river to keep us company.

In the morning I got up first, kindled the fire, had some coffee, and then wandered over towards where the rising sun was filtering through the trees on the other side of the campground. I had my camera and tripod and I set up and made a few exposures. By the time I got back, my co pilot was just getting up. We had a repeat of the previous night's meal, only with lots of bacon, then we packed up and got on the river by 10.

The river was just as fun, and the day just as fine, as the day before. We did see more people, but most of them were just preparing to get on the river, so we sailed on by and didn't see them again. This portion of the trip took a disappointing three hours, and we were back in our car heading south in all too short a time.

In short (now that you've had the long), the Pine River is one of the funnest rivers I've canoed in Michigan, if not the most fun. It's challenging--you've really got to keep an eye out for what's up ahead--with lots of white water to keep a smile on your face. You canoe through national forest for the most part, so you're out there in god's country, and, I wanted to mention earlier, the river also had interesting clay banks in spots which looked like small ledges and cliffs descending into the depths of the river. All in all, it's a beautiful river.

60 year old 18 foot aluminum Grumman canoe. I love this canoe, as it handles beautifully with a full load.

During the regular year, a permit is required to have your boat on the river. It costs three dollars as I recall. We went late enough in the year that there was no fee for the river, but it cost $4 to park the car (not to mention $35 to have Jim spot it for us), and the campground fee was something like $12.

I did call the national forest service, and the guy I talked to was able to give me all the information I needed.