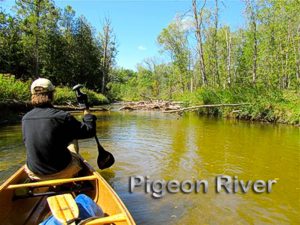 Near the top of Michigan's lower peninsula there is a fan-like array of navigable rivers, well known to paddlers, offering a variety of paddling challenges. The Pigeon River parallels the Sturgeon River to the east and empties into Mullet Lake.

Sunday, September 12, we drove North to our takeout at the Afton Road Bridge where the Pigeon River empties into Mullet Lake. We then headed south to the put-in, a bridge on Pigeon River Road about a mile east of where it meets Afton Road. There began our venture into the dark unknown.

The early part of the paddle was much like the previous paddles: clear water over a gravel base with interesting twists and bends under a scenic forest canopy. And then the challenges began. We ran into countless tree falls that had not been cleared. We squeezed our way through or over small openings, and detoured or portaged around impassable obstructions. At one point we came upon a tree fall we thought might be runable. While we were examining the obstruction from the canoe it got caught in the current and slammed sideways into a big log. This caused us to lose balance, and the canoe to tip upstream and quickly fill with water.

We found ourselves in thigh-high water, hardly able to stand because of the strength of the current. However, we were finally able to muscle the canoe up onto parallel logs so we could bail her out. We then lined her down over the logs to lower water where we were able to climb in. During the spill we lost the gel seat pad I had been using and one of our ropes that was not tied down. We lost nothing more because everything else had been tied to the canoe.

That was the leg of the paddle before we got to the part of the river north of route 68. Our guide book suggested exiting at the bridge and described the river north of route 68 as Not recommended. Ha. Are we not men? We decided Not recommended was not applicable to experienced paddlers. And we were looking for challenges. Ya, man. Well, by the time we dragged our asses out at Mullet Lake we had a totally different take on Not recommended. That part of the river became more marsh-like and was filled with an endless garden of old tree stumps, most protruding several feet above the water. The stumps, closely spaced, also had snared any debris that had floated down the river. Around every bend we faced a maze of narrow passages requiring careful study and intense maneuvering. Low water also added formerly submerged stumps to the arsenal of obstacles we faced. However, slowly, slowly and methodically, we fought our way through until we finally reached open water in the marsh above the takeout bridge and Mullet Lake.

I am not a fan of the Pigeon River. However, if we ever take it on again we would start well south of Pigeon River Road and exit at the Route 68 Bridge as recommended by the guide. There is no reason to go through hell twice.

Our luck continued back at Haakwood Campground where we watched a storm forming to the north. At first it was a spectacular show in the distant sky lit up by huge lightening flashes brighter than I had ever seen. The sky darkened as the storm headed in our direction. It finally hit us at 9 pm. We jumped into our tents, when probably we should have gone to our cars. At any rate, I spent my time inside the tent holding down the tent fly as it was being battered by gale force wind and a furious rain. The lightening kept crashing all around us. But the storm eventually passed, the skies cleared, and we had a beautiful sunrise the following morning.