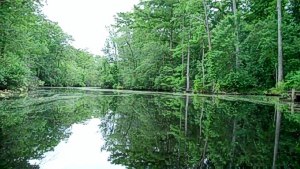 The upper Perquimans river in northeastern North Carolina is a black water paddler's paradise and is also an official birding trail. The boat ramp on Route 37 in the small town of Belvidere is the best choice for paddling the upper reaches of the river although there is another put in spot north of this ramp.

For our first trip on this river, my girlfriend and I chose to go north from the put in. Once we crossed under the bridge on route 37, the river turned to the right and began it's winding way northward. The traffic noise, though present, was not obnoxious. After a quarter mile or so the noise faded and we were treated to the almost constant sound of turtles plopping into the water from their sunny perches. Even though the temperature was well into the mid 80's, the birds were singing and active. That was a surprise considering we didn't launch until 1 PM, a late start by many a paddler's schedule.

We paddled approximately 2 miles northward on the river, turned around and headed back to the put in. There were no houses on the river but there were the dilapidated remains of a boathouse and some other structure close to the put in. We encountered no other paddlers or boaters during our paddle. The river remained clear of obstructions throughout and the width varied from 20' wide or so up to about 45'. The current, although present, was not a factor in our paddling.

We enjoyed a nice, slow paddle both ways, enjoying the wildlife. We saw three deer and heard a few more as they went crashing through the surrounding swampland. At one point we happened upon a deer curled up in a spot right at the river's edge. The deer remained there until an errant paddle splash sent it running as well. We scared away two Wood Ducks as we rounded one bend in the river. We tallied our count of birds seen and heard during the paddle and came away with a total of 30 species. The highlight was several sightings of a juvenile Red-Shouldered Hawk.

As is usual with these rivers (ones in swampy areas), there were no accessible areas to pull ashore and rest. While this did not draw away from our paddle, it would have been nice to find a place to stop and stretch the legs for a few minutes. There was one area about 1.25 miles north of the put in where a large field was present and the shoreline was suitable for landing. Unfortunately we did not know if this was private property (probably) or not and decided to err on the safe side and not go ashore.

Here's short video of our paddle:

The boat ramp is located on route 37 in Belvidere, North Carolina (about an hour's drive from the city of Chesapeake in the Hampton Roads area of southeastern Virginia). There is a picnic table, a nice wooden dock suitable for lounging or laying out gear and a concrete boat ramp. There is parking for about 5-6 vehicles with trailers, maybe more if there is a mix of vehicles with and without trailers. There are no restrooms, permanent or portable. Also there is no fee to use this ramp.

The cities of Elizabeth City and Edenton are nearby and have hotels if you prefer to stay in NC and closer to Belvidere. The city of Chesapeake in Virginia has many nice accommodations in the Greenbrier area (intersection of I-64 and Greenbrier Parkway).

There is a general store at the intersection of Perry's Bridge Road and route 37 and an interesting looking restaurant called the Nicholson House (both closed on Sundays). If you need gas, get it in Morgans Corner because the only other gas near Belvidere is in the towns of Winfall and Hertford some 8 miles further south.

No fees or permits required for paddling.

For a fun drive, use route 17 to enter NC and turn right on route 158 at Morgans Corner. From there you take a left on Turnpike Road, a left on Sandy Cross Road, a right on Bethany Church Road which turns into Perry's Bridge Road. Finally take a right where Perry's Bridge Road intersects route 37 and the put in is less than a quarter of a mile away.

No, but for more information on this river and its access points and camping platforms, visit:
www.pathsofperquimans.org