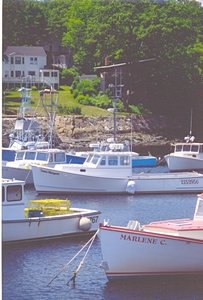 Perkins Cove is a man-made harbor chiseled out of basalt rock/ cliffs in Ogunquit, Maine. It has both a working lobster and deep-sea fishing population, and an artist�s colony, so plenty of tourist attractions. And a public restroom.

The launch is at the end of the point, just before traffic is directed to swing back and around. If you can find parking, it is available for 2 hours only. If not, drop your boat and gear, and drive back up past Barnacle Billy�s Restaurant, there is a pay parking lot there, depending on the season $5.00 to $8.00 and you can leave your car and walk back. Especially in the summer, expect it to take an hour to drive from Route 1 at the main road, to the end of the Perkins Cove area.

Earlier is better, even in November there were still tourists around. Some of the parking is designated for the working fishermen until 9 am.

It took me ten minutes to drive from Route 1 to the end of the Cove on a foggy afternoon of November 5th. Still plenty of tourists around, but not like during the summer. I dropped my gear at the boat launch and went to the pay parking lot,

This was my first ocean experience ever, but I was feeling pretty confident with my ClearWater Designs St. Lawrence. 15� feet long, 23 inches wide, with rudder, etc. All my drygear, water bottle, spare paddle, etc. I was also interested to see how the hatches would do, if they would leak or if things inside them would be dry. I chose to use my yellow paddle (220 cm) rather than the purple (210 cm) since I knew that bright yellow would show up better than purple. My kayak is yellow fading to green, and with the visibility, I figured every little bit of color would help if there was a real boat coming, not that I had any intention of being anywhere near in the way. The purple paddle I secured to the back of the boat, within easy reach, just in case.

The bottom of the boat ramp is slippery where the tide comes up, but other than that launching went smoothly. I was watched with great interest by several people at the coffee shop right across from the ramp.

Started out the paddle by heading out towards the ocean. I clung closely to the East side of the harbor. Watching for boats and to see what might be happening. Visibility was about 200 feet, heavy mist, and chilly.

Enjoyed the metal sculptures in the yard of one of the homes on the edge.

They have a long-legged bird, perhaps a heron, with a fish in its beak, as well as several other cut-out silhouettes.

At the entrance to the harbor there are several groups of rocks. Waves were breaking near them, I stayed back and away, watching the patterns of the water and how they moved. The big red buoy at the mouth of the entrance had a cormorant sitting on it, occasionally stretching as if to show that it was more than decoration.

I flirted with the waves a little, but wasn�t sure how to handle them, and was very much keeping in mind how cold the water was. Last thing I wanted was to swim. A whale watching boat was coming in, I watched it sit outside the approach while its skipper made sure the channel was clear, and then proceeded down the mouth into the harbor. After it passed, I crossed over to where the Ogunquit Museum of American Art sits on the West side. All of its shutters were up over the window, clearly closed for the season, still an imposing building looking out to sea.

Heading back into Perkins Cove, I passed under the footbridge, in the upright position at this time of year. In summer it is generally down as people go from the hotels on the West and cross into the shops area.

I explored the Cove, staying close to the West side, looking at the many fishing boats still riding at anchor. I was the only small boat of any type wandering around. Then whale watching boat I had watched come in was busy tying off, no load of tourists, and I called out to the skipper. �Are you going out again tomorrow?�

�No,� he replied, �just going out on my own today, we�re closed for the season.�

�Thanks. � I replied, continuing on to the end of the harbor.

A group of 5 ducks took flight as I came into the shallows at the base of the waterfall that feeds this enclosure. The water made a roaring sound, descending from about 40 feet up, reminding me of the freshwater rapids I�d run this summer.

I paddled back up towards the launch site, and then pulled very close to the East side as I saw a lobster boat coming in. As it got closer, I could read the name on its front, the Susan Margaret, a boat I know is owned and captained by my childhood friend, Mike Remkiewicz. I could see him at the helm, with his stern man in the back, both of them in orange waterproof fishing pants.

As they passed me, I lifted my paddle and waved, but I received no response. I had no thought that he had any idea that he might know the kayaker who waved. The entrance there is so narrow that a 34 foot boat would be carefully navigating, as long as I wasn�t in their way I was of no interest. And I certainly had no interest in being a �North Atlantic Speed Bump.�

Returning to the ramp, I paddled in close, braced my paddle and released myself from the kayak. Getting one foot into 2 inches of water, I easily stayed dry in all other parts, and emerged from my green and yellow cocoon.

Pulled up onto the ramp and divested myself of my PFD, helmet, gloves, and swapped my aquasocks for my regular shoes. Making sure the boat was out of the way of anyone, I then walked back to my car at the other end of the Cove area, retrieved it and came back to load up.

Found a nice close place to park, as it was nearly dark now and the tourists were giving up for the day. Checked out my hatches. The front one had about a cup of water in it, the back one was completely dry. Loaded the boat back onto the top of my Honda Civic, where I again noted with amusement that it is 6 inches longer than the car. All secured, I visited the public restroom there, then got into my car and ready to go in quest of food and a hotel, in that order.

Just as I was putting the key in the ignition, a large grey pick-up truck pulled up alongside me. The driver was my friend the lobsterman. He clearly did know now that this was me. His mother had called him earlier to let him know I would be in the area and paddling, and apparently the connection had been made. Mike invited me to follow him home for a visit. Had a nice simple dinner with him, burgers, and made plans to pick up some lobsters from him the next day after his work was done, and my paddling for that day completed. I then went off to find a place to stay for the night.

Got croissants and a muffin at the Dunkin Donuts down on Route 1 in Wells, and the young women there recommended the USA Hotel. I was their last guest for the season, they were closing the next day. Very nice, with a balcony overlooking my car and kayak, and rested well.

Summer tourist destination, in the winter it thins out considerably, but the Cove is open year round.

None. Parking, perhaps, see as described - $5-$8 in summer it can be difficult.

I-95/ Maine Turnpike to exit for Ogunquit/York, take a right off the ramp but get into the left lane to continue North on Route 1. In the center of Ogunquit, turn right (East) to Perkins Cove.