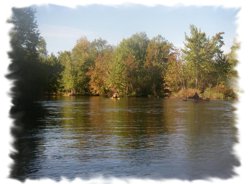 Put in at the public launch on M-37 a few miles south of Baldwin. The details of the river ahead were sketchy due to a lack of good information and maps. We planned long days and we okay with that. It was in the middle of the salmon spawn so there were LOADS of fisherman and a fair amount of drift boats. If you want solitude avoid the fall fish spawns. The fisherman were nice enough as a whole with a few who obviously unhappy to have their river invaded by kayaks.

The river was fast here, floating maybe 3 mph or so. We saw hundreds upon hundreds of fish and nearly as many fisherman. The river was tight, maybe 20ft average width and deep enough to avoid bottoming out with the exception of a few sandbars. Expect lots of turning, lots and lots, the river is a coiled snake. The distance the river covers as the crow flies is 25miles, the actual distance is nearly 3 fold that. We spent most of the time spread out (there were 5 of us all told), working our ways slowly through the turns, fisherman and downed trees. Happily we didnt need to get out for any large obstructions.

The day went quickly enough. We stopped for only one long break and I didnt eat an adequate portion of food. At this point we discovered that the maps given to us by a local livery (called Ivans) were wrong by half, but at least the distance was shorter. I ran my GPS non-stop and tracked the river marking take out and camping. I only mention their name to be leery of the map distances, NOT their service. Our cars were delivered on time and the staff was very helpful.

We paddled in to Sulack landing happily. We discovered the camp is mile uphill. We opted to carry all our stuff including boats to ensure no vengeful fisherman took their mood out on our craft. The night was loooong; a group partied and hollered all night long. They were still going strong at 8am when we awoke.

After a long and sleepless night we slowly got moving. We ate a pretty quiet breakfast and packed. We carried three boats down the hill and as we got ready for the last two, one of the partiers from the site next door offered to drive em down, of course we accepted.

There were quite a few fisherman again. We navigated through them and the twisty turns for about 30minutes when we saw the canoe in only sites at Elk Campground. They looked really nice and the consensus was that next time we will push on and stay there. The second canoe only camp at Logmark came up so quickly ,was poorly signed (it didnt say campground, only Logmark) and had been overrun by fisherman that all I had time to do was mark the spot on the GPS.

The next stop was supposed to be Mapleleaf. its a parking area just north of the river. It to was unmarked. I am not exactly sure where it is to be honest, but assume it was the real sandy point full of fisherman on the north bank. We had hoped to stop there for lunch but ended up downriver at a nice pull off point in the woods.

We ate and headed on to Walhalla and the first set of spreads. We didnt know what to expect so we prepared for a tangled maze of dead ends and wasted time. Turns out it was rather simple, 1hr 15 min and we were at Reek rd. We just made sure that we followed wherever the strongest current went and it was fine. Gotta think and act fast on this water.

After Reek came Indian Bridge. Nothing remarkable here, good access and pit toilets. Paddled maybe 40minutes and we found a nice spot to camp, high on a bank with good flat ground for tents. Not marked as private. Some locals came in as we dined and told us it was state land. Definitely a spot Id stay again. We had rain from 445pm till 930am. Very dreary but stayed dry in our shelters.

A quick paddle to Scottville, we opted for a short day. The water was up maybe a foot from all the rain. The morning was cold, once we stopped we unloaded quickly, paid the $17 for camp and took showers. A quick 10min walk to a great eatery, The North Country Cafand we were set. If you can stop at this camp. Its owned by the city of Scottville and is really nice.

Some locals gave us a nice salmon which was great for dinner. Had some friends swing by for a visit too. Not Rustic but nice to have a shower and shelter. 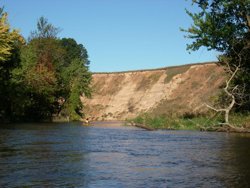 A clear and early morning. The second set of spreads was upon us. We opted for an early start and made water at 830am. The spreads werent bad but were worse than Walhalla. I lead us down one wrong turn that necessitated 3 of us getting out of our boats. Stay in the largest branch of water coming through here. Lots of channels, but not bad as I said. At one point a log blocked all our paths, so out of the boats again. A much wider slower and more scenic stretch here, by scenic I mean open and larger views.

We were able to paddle along side one another for quite some time here. A few more cabins and loads of warm sun. We cruised along and enjoyed it quite well. From US 31 to Old 31 is about three miles, when you pass US31 (its two low bridges, 3 lanes each, cant miss it) stay to the left/south at the next major for for the boat access at old 31.

I highly recommend this trip.

Ivans Livery in Baldwin delivered the boats on time and was a great help in site selections.
Whispering Oaks Cabins are beautiful, they are just south of Baldwin, MI
The Scottville campground was amazing for a paddle trip.

If you want GPS coordinates for camps etc. or any other help email me at: joenjoyharvey@yahoo.com

You will note I opted for moderate as a description for difficulty. The water is easy but with the constant turns and anglers boat handling skills are essential.

More pictures of the trip available at: http://outdoors.webshots.com/album/554434728jXaiDN

Ivans Livery in Baldwin -- they ferried our cars