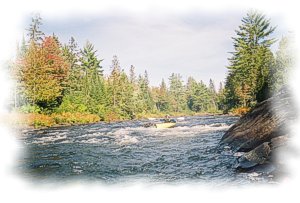 We left at 7am from Northern Lower Michigan and drove six hours north and West to the put in at Gibbs City, Michigan, which is not a city but a point on a map. When we launched it was 37 degrees and snow mixed with rain was falling.

We were all in day boats, a Loon 100, a Penguin and a bunch of rented Otters and a Heritage 12'. The river was beautiful, but the weather was terrible, with high winds with sun interspersed with clouds, snow and rain. I thought we would all die. After 2 1/2 hours paddling we came into Blockhouse campground and stopped for the night.

After driving most of the day, dropping off boats and then delivering a takeout vehicle it was already 3pm when we launched. After the drought, the burn ban had just been lifted that week, and so we were able to find some fatwood, the camp saw I had found at Wal-Mart worked and we had a nice fire.

Day Two: "The Long Sit"
We floated at least 18 miles today. Much of it was gentle, a third of it required paddling stillwater, but the last third was exciting. The calm stretches were interspersed with short flumes and even some short rapids. I took them on as the expedition leader and then found out guess what? You just float through them. 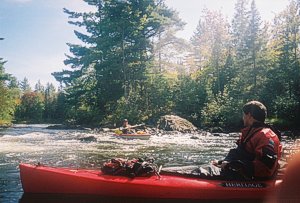 Finally we reached Hemlock Rapids, 2/3 mile of whitewater. We had all said we would not run them, but guess what? When we got there we all looked at them and said 'hey, it's not much worse than what we've done already' and had a blast. I got hung up on the lower section and nearly capsized. It's the first time I've ever looked downhill on a river.

That evening, high on the rapids and tired from a long day in the saddle, we found a small island to camp on. It was perfect.

Day Three: "The Slog"
While we initially had current and a couple of fun chutes to run, we abruptly ran into the backwaters of the dam in Crystal Falls. Eight miles of hard paddling with the wind in our face. At first everyone was trying to drift with the current, but I decided to set the pace and moved out, no breaks. I got into the boat launch at Crystal Falls at about 2pm. We went back and got the other truck and then had triumphant rootbeer floats at A&W in Iron Mountain.

Highlights:
The Blockhouse was good, our private Island the second night was great. This river is well known for its bald eagles; we saw at least 30. Hemlock Rapids rocked.

Low Lights:
Water was low after the drought and we did a lot of scraping.

The Blockhouse Campground was nice, after that find something on public land

I-75 N to St Ignace, then US2 West to Crystal Falls, then Gibbs City (not a city)