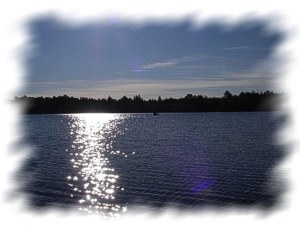 Being local to this area, I am a bit protective of these rivers. However, I am inspired to do a write-up because over the years I found that there is quite a bit of misleading information both from this site and in-print sources.

Firstly, kayaks do not have any advantage over canoes on these rivers, or vice versa. It is the experience of the paddler that decides how they perform. Phrases like, "canoes would be out of place here" are not accurate.

Secondly, the water level read from the gauge at Harrisville plays a very minor role in determining if this and other Pine Barrens rivers are run-able. In fact I will go out on a limb and say they are "always" run-able. Even in times of the lowest water levels, such as the drought years of 2000 and 2001, you "might" run into a section where the bottom of your boat scrapes the sand, but these sections are never more than a few yards long. Inherently low-level lakes like Harrisville are best navigated by following the original river channel.

OSWEGO LAKE
The Oswego is beautiful lake. The best description I can give to a newcomer is that it is a place reminiscent of the Adirondacks or Quetico. It's a superb paddling, picnicking and swimming destination due to its quiet remoteness, but that same remoteness almost always assures that its distance from any populated area keeps it from ever being crowded. From East to West, the lake is a bit over a mile and from North to South it is about 3/4 mile at its widest points. The parking lot is relatively small and there are a few picnic tables (some sadly falling into disrepair) as well as a solar powered "bathroom/privy". This is one of the only places in the Pine Barrens that completely freezes over in winter.

The eastern side of the lake has a number of small islands that make a wonderful place to explore, but both the islands and the entire eastern shore are a muskeg and any landing should not be attempted lest you sink up to your neck in mud. The wind on the lake generally blows in a north-easterly direction, something to consider when heading back to the put-in from the east. Stay clear of the Dam on the south side. 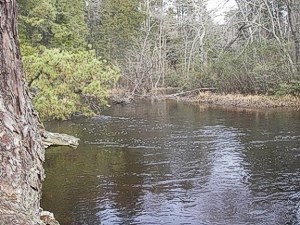 THE UPPER OSWEGO
The upper Oswego is accessed by paddling upstream from the lake. To find the entrance, paddle along the northern shore of the lake to the north-east corner. The remains of a duck hunter's blind (incorrectly identified as a cabin in other reports) are visible on the very first island. Keep this island to your right and you are on the river. Paddle on and soon you will feel the push of the upstream current. There are one or more forks near the entrance and the best advice I can give is, when in doubt, stay left. If you pass a beaver lodge on you left, you are on the right track.

Cedar trees dominate the river banks and there are few strainers... thanks to the efforts of a one or more good Samaritans who keep it clear. On this section you may find a profuse growth of blue-ish berries growing in clusters. These are not the high-bush blueberries you will find elsewhere in the area. Do NOT eat them.

After attaining upstream for a bit, you will come to a grassy area where the river becomes braided, locally known as a wet meadow. To the right are the remains of an old wooden dam. Stay left as usual to find the main channel.

Above this point, the area that becomes increasingly narrow and boggy. Beneath the canopy of cedars, the ground is covered by spongy, sphagnum moss with many of the ubiquitous, but nonetheless interesting, carnivorous Pitcher Plants. Eventually you will pass the remains of a sand road to your left. This connects to a private-gated road that does not allow access to the river. Make no mistake, this area is still quite remote and rarely traveled, so it would be a bad place to become incapacitated by yourself.

If has taken you two hours to reach this point, it should take you an hour to go back downstream to the put-in on the lake.

LOWER OSWEGO
From the put-in on the lake, the take-out for the river is South by Southeast. It is narrow and steep, so care should be taken to avoid a spill. Do not take out next to the dam. Portage left and across the road and put in below the dam.

The river takes on a slightly different appearance from here. Compared to the upper Oswego, the main body is wider and the Cedar trees larger. Some are absolutely massive. Much of the same cedar bogs from the upper Oswego line banks of the lower. A sprinkling of pitch pine and maple/oak intersperse the Cedars.

Upon reaching the area known as Martha Pond (no longer an actual pond), the river becomes braided, but the main channel keeps to the right. Eventually swings left where an old sluiceway and adjoining structure can be seen. This area provides a nice landing for lunch if you are so inclined.

The rest of this run meanders its way to shallow Harrisville Lake. Upon entering the lake, one should keep left, carefully monitoring the channel for its diagonal turn to the right. Take out at the parking lot or carry across Route 679 where the Oswego joins the Wading River.

Bodines Field Campground: On Wading river downstream from its confluence with the Oswego.

Several other nearby campgrounds on Rt 563 can be reached with a vehicle.

Motels are available on US Route 206 to the west.

From the center of Chatsworth, drive south on Rt 563 for six miles and make a left on Lake Oswego Road until the pavement ends at Oswego Lake.

Put-in: From Chatsworth, south on Rt 563 for six miles and make a left on Lake Oswego Road until the pavement ends at Oswego Lake.