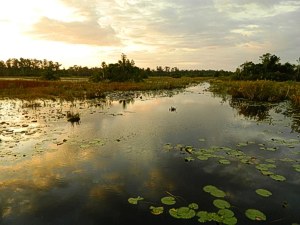 The expansive 402,000 acre Okefenokee Swamp in Southern Georgia is the largest of its kind in North America and a dedicated Nation Wildlife Refuge. Occupied by alligators, bears, poisonous snakes, and carnivorous plants. It seems everything there wants to eat or at the very least kill you. Of course we had to experience this place for ourselves.

For us this was another wonderful example of how diverse the landscapes of our great country are. Living all our life in the Midwest, Merri and I were about to enter an ecosystem that was totally unfamiliar to us. We came into it with the preconceived notion that there has to be a majority of solid, dry land to support a healthy environment capable of harboring a wide mix of plants and animals. We were proven wrong, dead wrong. In fact this was one of the richest, most vibrant-with-life settings we've ever visited.

First things first; so what about the alligators? We spent decades overcoming our anxiety of camping among Black Bears. Now we had to face alligators! I could only assume they associate people with a quick and easy meal. Would they come into our camp at night and snack on us? Would they purposely tip our canoe over so they could eat us? Fortunately we had an opportunity to discuss our concerns with a park ranger. She quickly put our minds at ease. We were able to enter the swamp with no worries about the toothy swamp creatures. Well, almost no worries.

There are three entry points into the refuge. We chose the one in the southeast corner near the town of Folkston. The night before embarking on our adventure we wanted one last taste of civilization. Just in case we didn't come back out. In Folkston there's Railside Lodging. Aside from a quaint little house they rent for the night, they also have two old cabooses, yes, cabooses. How cool is that? Ours was the smaller of the two but still had a complete, albeit small kitchen, practical bath, and a built on deck where you can sit and watch the freight trains rumble by. Sleeping arrangements were four single bunks, two up, two down. If you want an unusual but comfortable place to stay, we highly recommend it.

Before embarking on our swamp trip we had to obtain a permit and file a travel plan with the Refuge Headquarters. It's best to plan well in advance and get your reservation in. There are a limited amount of campsites available. You do have to stick to your route plan and camp at your reserved sites, no exceptions.

Day one:
Staying the night before so close to the entry point gave us an early morning start. If you're camping in the refuge you're required to get started before ten am. This ensures you will get to your camp before sunset. You do not want to be looking for your camp in the dark! We made certain that we had plenty of time.

Our start off point is referred to as the Suwannee Canal Recreation Area. The Refuge Headquarters is located here too. Most of the day's paddle was on the Suwannee Canal. Dredged out over 100 years ago it now bears very little resemblance to being man-made. We were immediately welcomed by a dead tree full of vultures warming themselves in the bright morning sun. Kind of an ominous greeting.

We were hoping to see at least one alligator during our trip. It would have been extremely disappointing if we didn't. Well let me tell ya; they were everywhere! They ranged from one to fifteen feet long. Because of the narrowness of the channel we couldn't help but get right up close to them, within ten feet in many cases. They are by far the creepiest animals I've ever seen. With their bumpy scaly skin, about a hundred bright shiny teeth protruding past their gums, and the most evil looking eyes ever! But alas, since there was so many of them the novelty wore off quickly. In fact we found ourselves getting quite complacent when one would show itself, until we had one swim under us and bump our canoe. That woke up the butterflies in our stomachs!

Besides the gators there is a great wealth of other wildlife. Most noticeable are the birds; Ibis, storks, herons, owls, hawks, a litany of tiny song birds, it seemed like all the birds species on the continent are represented here. There are bears too. At this point one would have been a welcome sight.

The flora fluctuates greatly too. The canal is mostly hemmed in by a dense flooded forest of cypress and tupelo trees with long clumps of Spanish Moss drooping from their branches. In the slightly drier upland areas there are thick stands of oaks and pines. There are also expansive tracts of swamp prairies with their tall grasses and wild flowers growing out of the peat bogs and a layer of lily pads so impenetrable you'd swear you could walk across it.

Paddling about nine and a half miles on the Suwannee Canal brought us to an intersection with the trail leading into Chase Prairie. The trails are well marked with signs and blaze posts. Two and a half miles of paddling through a very narrow and shallow path surrounded by lush vegetation brought us to our first of two night's campsite. 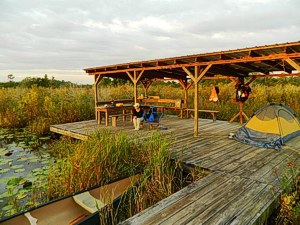 Each camp has a name. This one is called Round Top. Most sites are what is called a chickie. Being a swamp there is of course generally not enough dry land for a traditional campsite. A chickie is much like our backyard wood decks, sitting about a foot and a half above the water. There's also a composting privy connected to the main platform by a short walkway. When I first saw it my thought was "I hope we're upwind of it". Surprisingly it didn't stink at all.

The chickies have a nice picnic table and a partial roof, pretty comfy by our standards. The only challenge comes with setting up a tent. Of course there's no way to put in stakes. Fortunately we have a freestanding model so all we had to do was run a couple anchor lines to the roof pillars so it wouldn't blow away if it got windy.

Earlier when we had our conversation with the park ranger she did warn us that many of the campsites have a resident nuisance gator that hangs around waiting for a handout. Enter One Eyed Jack. That's what we called him since it looked like his eye may have had a confrontation with a motorboat prop at some point in his life. We weren't too concerned over him eating us however, most of his teeth were missing as well. I guess he could have gummed us. At first we felt a little uneasy with him patiently sitting just ten feet away from the edge of the deck, staring at us with his one creepy good eye. We eventually got used to him being there.

At sunset the nightly lullaby began, lead by a chorus of frogs, each variety singing in its own key and rhythm. From a distant tree an owl sent out a call to all the other owls that this is his territory. A heron let go with a short series of her prehistoric pterodactyl like squawks, probably riled by a marauding gator.

One eyed Jack pulled himself up on a clump of floating bog a mere five feet from the side of the platform. We heard him give a sigh. Not sure if it was out of relief to be in bed for the night or disgust because we wouldn't give him any of our food.

Morning ushered in the new day with a beautiful sunrise. There's nothing like sitting all by yourself in the middle of a wilderness, a cup of strong black coffee in hand, listening to the world around you wake up. After more coffee and a hearty breakfast of bacon and eggs we said goodbye to our friend Jack and moved on. Anxious to see what was waiting for us around the next bend in the trail. The distance between us and our next camp was only eight miles. We had all day to go slow and take in all the subtle nuances of our surroundings. Our next camp was Coffee Bay on our way back along the canal. Instead of just turning around and leaving Chase Prairie the same way we came, we took the long way around, north then southwest back to the canal. This is where we experienced the "upland" hardwood portion of the forest. 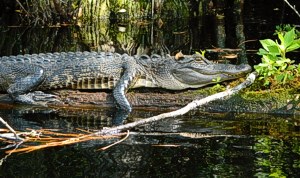 Ahead there was a huge gator, must have been fifteen feet long or better sunning himself on a hummock of marsh. I thought Merri saw it too so I kept quiet in the hope we could get close before he slipped into the water to avoid us. Apparently he and Merri were in a deep, wilderness, morning trance. We got real close before the gator realized we were there. Instead of sliding into the water he jumped, creating a tremendous splash and corresponding wave. Merri, being abruptly brought out of her meditative state, damn near jumped right out of the canoe. Of course I got yelled at for not making her aware he was there. It was worth it.

It wasn't long before the sun was high and hot. Fortunate for us we reached a portion of the trail that's narrow, passing under a canopy of Cypress and its drapery of Spanish Moss. The feeling was surreal; dead quiet, the smell of wet wood, dark, other than the few thin, laser-like beams of light the trees allowed through. The breeze fluttering the ghostly hanging clusters of moss. There was something in the air.

We traveled slow, taking photos and video to show our friends when we get back home. Hoping the images will do this place justice. Our camp for the night is close to our entry point, Coffee Bay is its name. Another roofed wood platform. This one benefits from being built on a short narrow ribbon of mostly dry land. The outhouse is located at the far end, about fifty feet away. Merri was concerned she'd step on an alligator during a midnight trip. She didn't, neither did I.

Almost immediately after moving in we learned what the earlier breeze was blowing in; rain. It came down heavier than I've ever seen. So thick it was hard to see any detail in the trees on the other side of the channel only forty feet away. Just a couple hours earlier we passed a man and woman paddling in. We were hopeful they made it to their destination before the deluge. As quickly as they appeared, the clouds and rain they brought with passed by, leaving in their wake a gorgeous sunset. Then the hoards of mosquitoes descended upon us. The rain must have revived them since they weren't as bad the evening before. Lucky for us we had a comfortable meshed-in bed and good books to lull us the rest of the way to sleep.

Morning came on bright and clear. A hospitable swamp send-off on our last day. A short few hours of leisurely paddling brought us back to the point we began our little adventure. We drove off with smiles and pleasant memories; some of life's greatest treasures.