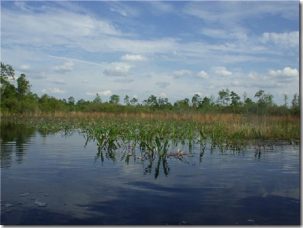 After all the years I have lived in Jacksonville, I had never paddled the Okefenokee. However, recently two friends from North Carolina wanted to go and we pulled together a trip early enough that we hoped to miss the mosquitoes and get in a bit of bird watching.

Our permit was for an east to west traverse of the park on the Orange, Purple, Blue and Green trails, giving us to nights in the swamp.

Our friends had come down the night before the trip and stayed in Folkston, while three of us drove up from Jacksonville. There were two canoes and a kayak. We brought two cars to leave one at the take-out at Stephen C. Foster State Park and the other one to drive back to our put-in at Suwannee Canal Recreation Area. We were running late, so didnt manage to get on the water until nearly 11:00.

The first section of the trip (Orange Trail) is on the canal that was dug during the failed attempt to drain the swamp. This is an easy, mainly straight paddle. Lots of pond cypress and loblolly bay along the banks. We stopped at the Coffee Bay day use shelter on one of the banks. It was just a high strip of ground between the swamp and the canal, but had a covered picnic area and a composting toilet. After this it wasnt too long before we saw the entrance to Chases Prairie. There were a couple of gators here, including one big one on the bank and we did see one Prothonotary Warbler.

Chase Prairie was vastly different than the canal and showed the real swamp. Wide expanses of shallow water with lots of water plants and small islands in the distance. The canoe trail is basically just a 6-8 ft wide, growth free strip through the swamp. The swamp was covered with Golden Club and fragrant Water Lilies in bloom. The weather was great and we really enjoyed being up close and personal to all the plant life. The water is very shallow, often no more than two feet, which was generally no problem. The narrow trail did begin to twist, so some care had to be taken to not get into the weeds. There are white poles marking the trail, so there is no chance of getting lost. There are also trail mile markers that helped measure our progress. I had thought about bringing my GPS, but I couldnt find a topo map with all the trails marked to set up bearings, but this was no loss because of the good marking of the trail. 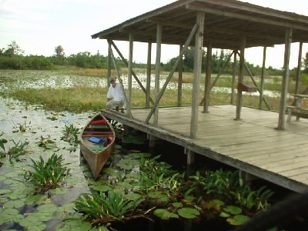 Pretty soon we came up on our first nights stop - Round Top Shelter. This is a platform in the prairie with a 360 degree view of the swamp. There is a main platform and a landing area with a composting toilet. It was easily big enough for the four tents and all our gear. You could even set up another tent or two and still have room to move around.

Butch and Michael, our North Carolina friends had decided this trip was going to be something special and decided to pull out al the stops when it came to meals. My paddling partner and I had brought our standard fare, but Michael prepared a feast of almond encrusted seared tuna steaks, a vegetable medley with sun dried tomato alfredo sauce, an nice pinot grigio, a nice bottle of single malt and homemade chess pie for dessert. What a way to end the day. The critters then came out with tons of frogs croaking and owls hooting.

The next morning we were awakened by the calls of some Sandhill cranes that were close to the shelter. The hung around for quite a while having their breakfast while Michael whipped up some sausage, scrambled eggs and English muffins. Soon we were back on the trail.

This was a short days trip to Floyds Island where we would spend the second night. The character of the swamp began to change with more tree covered islands along the way. We passed close to some gators and again saw a number of Sandhill cranes, herons and other water birds. We switched to the blue trail and headed to Floyds, but were surprised that we just didnt paddle up to the island. 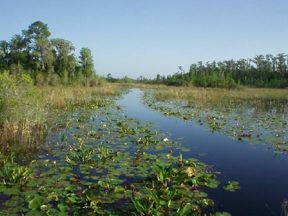 Instead, there was a narrow canal that had been dug during the timber cutting days (boy, I wouldnt have wanted that job for anything) that ran over a half mile up to the island. At the end was a very small pond, about 20 across and right where we had to get out were two alligators, both 10 -11. One slipped into the water, but couldnt go anywhere since we were blocking the only exit. We through some branches at the remaining gator, but he couldnt take a hint. I finally got out and progressively through bigger and heavier sticks and when I finally caught him in the ribs with a heavy stick (from about 20 away) he moved on. This gave me the chance to pull the canoe around and give the gators an exit. We were a little worried though, since we knew our friends were probably somewhere along that canal behind us.

The trail continues on the other side of the island, so you need to portage your boat and gear across. Theres a cabin there that has a cart that make the portage a bit easier. The cabin is pretty nice for the age and has four rooms. Its maintained by a troop of scouts and is in reasonable shape. Theres also a picnic table, benches and firepit outside making it a comfortable campsite. Three of us set up our tents, but Michael decided to bunk down in the cabin. Since we were in early we decided to scope out the island, but as soon as we got out of the clearing we were attacked by mosquitoes. Where they had only come at dusk on the platform and were pretty well deterred by Deet, they were more persistent here. We just decided to relax and take it easy for the afternoon. As you might have guessed our friends made it without a gator incident although they had to paddle right over them in the shallow canal.

This was to be another spectacular dinner with Butch cooking this time. Grilled filet mignon, roasted corn on the cob and sweet potatoes, a nice petite syrah and yet another single malt. We had heard there were raccoons on the island and sure enough, just as we finished our dinner, a raccoon came to visit. He was a bit timid, but persistent. Eventually we ran him off for good and then bunked down for the night. Strangely, there was very little wildlife in evidence with no owls or other night creatures.

The next morning we were on the water fairly early heading out the same kind of canal as the approach. We werent on it very long before we saw a large gator swimming in the canal ahead of us. We held back hoping he wouldnt submerge, but pull off into one of the side ponds, but after 10-15 minutes of this he submerged. It was really a little unnerving floating over a good sized gator in water that was only 18 to 2 deep. We were very careful where we put our paddles. 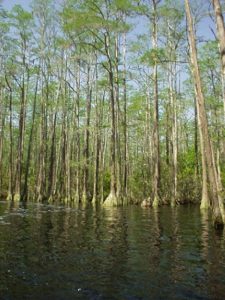 Once out of the canal we could see that this side of the swamp was totally different. Many more large cypress trees and islands and not the open feel of the prairies. We hooked up with the Green Trail, which is really the middle fork of the Suwannee River. As we headed for Stephen Foster we realized that the beautiful weather had brought out many of the day use folks. Stephen Foster has a large rental facility for boats, kayaks and john boats. Since this area is not a canoe trail it is open to power boats under 10HP and it was pretty packed. People were pretty reasonable though and while we had no problems, we had definitely left our wilderness experience.

The trail winds in and out of large bald cypress, sometime making a tight squeeze. The Suwannee then widens out into lakes every once in awhile, first Minnies, then Billys with more cypress stands in between. From Billys its not too far a run to Stephen Foster. There was lots of activity as we approached the boat ramp with scout troops ready to leave on a canoe trip and lots of day use people making the most of the weather. Phil and I arrived at about 1:00, well ahead of our friends, so we had our lunch while we waited.

There is a large campground there and a park store with groceries and maps, etc. Just before our friends arrived an 6 gator swam up and stopped at the boat ramp and just hung out until our friends came. We had packed up my canoe, so as soon as they came we began the shuttle. Its about an hour between the put in and take out.

It was a really great trip. Great weather, easy paddling and great scenery.

The refuge Visitor Center provides detailed information regarding the features and facilities at this entrance. Visitors enjoy a 4.5 mile wildlife observation drive, 4.5 miles of hiking trails, a .75 mile boardwalk into the swamp, two observation towers, and a restored swamp homestead.

General entrance fee is $5.00/car, but is waived if you have made canoe trip reservations. While you can use the day use areas without a permit, you can't use the canoe trails.

Camping overnight in the Okefenokee Swamp is allowed only with a permit, which is issued through the refuge office near Folkston, GA. Reservations can be made only within two months to the day your trip begins. To make a reservation, call (912) 496-3331 between 7 am and 10 am, Monday through Friday (excluding federal holidays). Reservations can be made only by phone; no walk-in registrations will be accepted. After 10 am, you may request information, but reservations will not be taken. Groups are limited to 20 people. During the months of March and April, no permits longer than 2 nights will be booked. After your reservation is taken:

Cashier's, certified or personal checks and money orders must be made payable to: U.S. Fish & Wildlife Service. Canoeists with a valid overnight permit are not required to pay the $5.00 per vehicle entrance fee at the east and west entrances.

When we receive the payment, we will mail the trail permit to you. Read the permit, sign both copies, keep the original (white copy) and immediately mail the yellow copy to the address below:

East Entrance: Directions: The East entrance is located 8 miles southwest of Folkston, Georgia on State Highway 121/23 and 4 miles west of the main entrance sign. Hours of operation: November - February 1/2 hour before sunrise - 5:30 pm; March - October 1/2 hour before sunrise - 7:30 pm. General Admission Fee is $5.00 per vehicle. Tour buses with 25 or fewer cost $25.00; 26 to 50 people are $50.00. Educational Fee waiver upon request. There is a refuge Visitor's Center and modern concession.

West Entrance: The West Entrance is via the 82-acre Stephen C. Foster State Park, a Georgia State Park, operating under a leasing agreement with the U.S. Fish and Wildlife Service. This entrance is located 17 miles east of Fargo along Georgia State Highway Spur 177. Facilities include a museum; guided boat tours; boat, motor and canoe rentals; a campground; furnished cabins and extensive areas open to fishing. An entrance fee is charged.