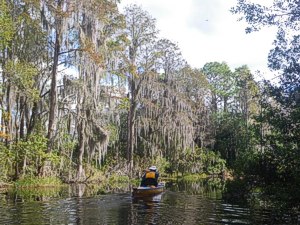 Dave and I decided to get one more paddling camping trip in this fall. I somehow managed to get a permit for three nights in the Okefenokee Swamp National Wildlife Refuge with only a week's notice (permits are reservable up to two months before a trip date, and I have heard tales of people putting the permit phone number on speed dial to get through to the refuge office). Camping was on platforms over water/land/swamp, so we took Dave's solo canoe and my Kruger Seawind for ease of loading and unloading.

The eleven hour drive down I-95 was uneventful and it was a short drive from there to our campground for the night before the trip. we stayed at Traders Hill Campground. $10/tent per night. Nice laid back campground, clean restroom and shower (yes, just one).

The next morning, Sunday, we drove about five miles to the Okefenokee Swamp Recreation Area visitor center and checked in with our permit. The center is nicely maintained, has a nice beach to launch from, and seems pretty secure for multi day parking. Gator number one was waiting for us just off the beach. 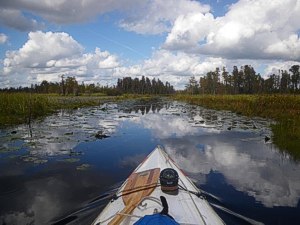 We launched and paddled west out through the main cross swamp canal. We passed two groups of people coming in from weekend trips. Our first camping platform was about a ten mile paddle. Each platform is elevated about 2 feet above the water and is about twenty by forty feet, with half of the platform covered with a tin roof like a picnic pavilion. A small walkway leads to a port a pot with a pit toilet underneath.

This site was partially on land, so we beached our boats to unload. There was a fire ring on the land. There are very few sites where fires are allowed. After setting up our tents and tying them down to posts and other appurtenances on the platform, we re-launched for some more paddling.

While paddling in the main canal was an easy 3.5 mph pace, once we left the canal and got into some of the less traveled trails the lilies and other aquatic vegetation slowed our pace to less than three miles per hour. Plus, we were gawking at the scenery and birds, such as White Ibis and Wood Storks. We did about 16 miles that day. That night, the low was between 50-60 degrees, and we had no mosquitoes. However, Fluffy, the resident alligator at the platform did show up begging for a handout. Poor Fluffy went hungry that night. 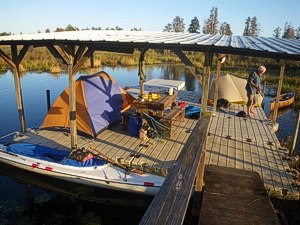 Next morning we re-launched under the watchful eyes of Fluffy and headed back through the canal and then north into the trails to Cedar Hammock platform, about a 10-mile paddle. The location of this platform had puzzled us before the trip, and it did not show up on any maps. We found out at the visitor center that a fire about ten years ago had burned the platform and the surrounding area, and a day use platform had been re-purposed at a new location on the trail but not renamed on the map. This platform, consisting of the plastic dock blocks we often see at marinas and kayak launches, was literally floating in an open area of the swamp's prairie. A 360-degree view of the swamp, and a nice sunset.

Anchoring to the platform was a bit of a challenge, as we only had the pavilion posts to use, and the platform pieces tended to form an uneven sleeping surface. Both of us were glad we would not be experiencing a thunderstorm while camping on this site.

While the swamp was surprisingly quiet during the day, at night the noises were constant. Alligators groaned and bellowed, owls hooted, frogs croaked, and lots of unknown things splashed. And there were the expected mosquitoes once the wind died down. The morning brought a wet fog and we were careful not to slip slide off the platform into the realm of the gators.

Our third day of paddling took us south about 10 miles to Monkey Lake, where the platform was located in the center of a cedar hammock. The paddle took us across the widest section of prairies we had seen to date. Our largest alligators were seen along this route, with one in the 8-9 foot range (sorry, no desire struck us to get exact close up measurements). There were very few mosquitoes at this site which surprised us. That night we were closely serenaded by several Barred Owls, with at least one about ten feet from the tents.

Our last day of paddling took us out seven miles to the north. We came across two Sandhill Cranes in the prairie. The binoculars revealed that these were wild birds, with no identification bands. Very nice to see. We just beat the rain back to the vehicle and managed to keep ahead of it for the drive back to Maryland.

Overall, a very nice exploratory trip. It would be worthwhile to go back and do more camping and paddling in other parts of the swamp. Permits are $15/person per night, and I am not sure of the maximum number of people allowed per site, but I wouldn't want to have more than four tents on a platform. It looked like the pavilions would support a hammock, but you would be in the way of cooking and using the platform in the rain.