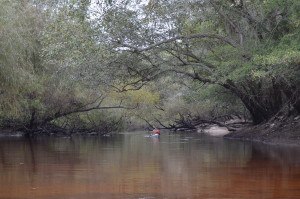 Three of us spent three pleasant days paddling and camping the black water Ohoopee River. We put-in Saturday, Oct. 5, at Ga. 152, NE of Lyons, Ga. This has a sand boat ramp on river left, upstream side of the bridge.

The take-out was 29 miles down river at Ga. 147, across from Reidsville State Prison, where there is a parking lot and concrete ramp on river right, downstream side of the bridge.

Initial water level was 250 cfs and 3.5' on Reidsville gauge. 225 cfs and 3.25' by take-out on Monday. We scraped the white sandy bottom several times, and often just cleared it, so I wouldn't recommend paddling this with a loaded boat much under 200 cfs. But in an empty boat you could go much lower and still have fun, even if occasional dragging is needed. 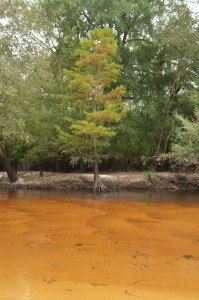 We also had to portage around about 7 river-wide strainers, and sneaked under and around a few more. Again, this wasn't much fun with canoes & kayaks loaded with camping gear, but not a big deal with empties. This high number may have been due to the high water levels of this year.

There were many houses on the first 8 miles or so, then just scattered houses after that. There were plenty of sandbars for camping and lounging, and only a few were posted.

Water level could get at least a couple of feet higher before significantly impacting availability of campsites. A good many cypress were on the upper sections and willows on the lower. Hardly anyone else was on the river. 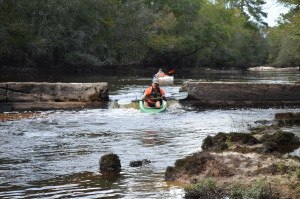 There is a small dam just above Ga. 56, with 3 openings formed in the top of it. The dam height varies from about 2' on the left to 4' or 5' on the right. We ran the left side opening, which had a 1' drop at this level, then carried or lined the boats the rest of the way down the short, rocky shoal.

Lots of waterfowl were seen, and several deer. A worthwhile river.

Nice sandbars to camp on.

Motels in Lyons and Reidsville.

Put-in: From Lyons, drive northeast on GA 152 to the river.

Take-out: From Reidsville drive southwest on GA 147 to the river.