For Texas paddling, most people's thoughts range from East to Central to West Texas. Few consider deep South Texas. Even so, a wonderful paddling opportunity awaits you on the northern limit of what early settlers called the Wild Horse Desert. Otherwise known as the Nueces Strip, the term referred to the area between the Nueces and Rio Grande Rivers.

On August 3, 2002, six of us in three tandem canoes paddled the Nueces River from the Highway 359 crossing near Sandia to the Highway 666 crossing near San Patricio. The stretch is about 20 river miles, and there are no intermediate public access points. In the lower portion, however, numerous fish camps dot the bank. As you approach the end, the development becomes nicer.

Because of recent flooding, the river was high. As of 4:45 A.M. the morning of our paddle, the La Fruta gauge height at the put-in was about 12 feet and the river was flowing at about 2,000 CFS. A couple of weeks before, the river had been 60 feet high and a mile wide. Five feet high or less would be a more normal reading for the river. We started paddling a little after 10:00 A.M. and broke for lunch between 12:30 and 1:00. After a leisurely lunch and rest, we started paddling again at 2:00 and were at the take-out bridge about 4:30.

The river channel is set between steep, heavily vegetated, mud banks. If there is a downside to the trip, it is the mud shore. At least at the river level at which we were paddling, to get to the water, you had to venture out into mud that was often ankle deep. But once in the boat, we washed the mud off by putting our feet over the side. Probably because of the recent flooding and high water, the water was muddy colored. Normally it would be an opaque green. 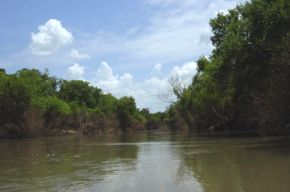 The current was comparatively fast, and if obstacles normally exist, they were drowned out. Occasionally we had to skirt a tree or other obstruction, but there was always plenty of time. No difficult maneuvering was required, except when I spent too long looking at the bank and nearly ran into the upper branches of a flooded mesquite tree.

The bird life is amazing. A birder was along on the trip, and she named more birds than I can remember. The countless egrets and herons made the biggest impression except the storks. I do not recall ever seeing an actual stork before, but a small flock of wood storks rose only as we were almost upon them and circled about us for a short while. The wingspan of one of the Great Blue Herons must have been at least six feet. We saw night hawks and some type of larger hawk. After the paddle, while recuperating with liquid refreshment, we watched roseate spoonbills sift through the mud of a stock pond on the Knolle Ranch. Although we did not see one, if you are quiet and lucky, you might catch a glimpse of an alligator.

A portion of the trip passes the Knolle Ranch. In addition to dairy cattle, the ranch offers hunting, birding, and a bed and breakfast. According to the ranch owner, the ranch river front would, at normal water levels, be a convenient takeout point for a five or six hour paddle. Keep that in mind if you want to combine paddling and perhaps birding with the luxury of the bed and breakfast. Compare camping on a muddy bank to a shower, a gourmet meal, and a soft bed. If you are interested, Knolle Ranch has a website, and the distinctive name makes it easy to find with a search engine.

Living in San Antonio, as I do, I am in easy driving distance of three of the best paddling rivers in the State of Texas, the Medina, the Guadalupe, and the San Marcos. San Antonio paddlers rightfully concentrate their paddling on those rivers. But when in the mood for something different, don't forget the lower Nueces. It's a different slice of nature from that seen in other parts of the state.

Photographs are courtesy of Marylin Kircus of the Houston Canoe Club.

There are inexpensive motels in Corpus Christi and many more choices in Corpus Christi (one hour away) and San Antonio (two hours away). The Knolle Farm bed & breakfast is along the route and offers the chance to couple luxury with paddling.

From IH 37, take exit 36 into Mathis. Follow the signs out of town on Highway 359. Continue on 359 until you reach the Nueces bridge.