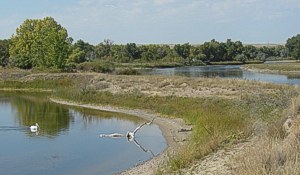 As the pace of life gets ever more hectic, finding the time & place for canoe camping that's close, scenic, safe, & with some variety is a challenge. A trip requiring minimal preparation, travel, & sadly, float time may be required, especially during spring & fall, when daylight hours are limited.

For those lucky enough to live in central Wyoming, a pleasant day outing that's expandable to a short overnight camping trip is the five mile stretch of the North Platte River between the Coal Shadow Road & Big Muddy Bridges in Converse County, Wyoming.

Although we canoed through & beyond this stretch over 30 years ago, our recent plan to float this segment fell victim to the usual time constraints & had to be replaced by a hiking/wading day trip to a cluster of public-accessible campsites on BLM land, & another day hike to the Big Muddy Pond, a state-owned walk-in fishing site next to the River.

This paddling overnighter would begin at the northeast corner of the newly-rebuilt Coal Shadow Road Bridge (Converse County Road #21) where a solo paddler can lower a boat over the rail end-first with a rope & then walk the other end to a soft landing, or, tandem paddlers can lower both ends simultaneously. The gear would be lowered much the same way.

A long rope doubled-up by threading through bow caps, D-rings, tie string loops, etc. can be subsequently pulled free after landing a load. Alternatively, a single, dedicated tied-on rope can be dropped after landing. The boaters themselves can squeeze between the flared end of the galvanized steel guardrail & and concrete abutment before carrying boat & gear the remaining 30 feet to the water's edge. Although it's possible to launch at any of the four corners of the bridge, a deeper channel along the northeast one simplifies the "paddle off". The remote location & lack of parking makes unattended parking insecure, so a "drop-off" is recommended.

The first quarter-mile of the float would be along private land but four miles of the remaining four & one-half mile journey would be past a combination of state and federal land from which fishing is allowed even from shore. 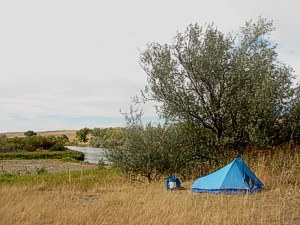 While camping on state land is prohibited without the surface lessee's permission, a BLM (U.S. Bureau of Land Management)-owned 160-acre tract straddles both banks & the northern tip of one of the best camping islands on the entire river � all in the SE quarter of Section 31, Township 34 North � Range 76 West. The Island has steep, high banks along the east channel, so the best access is along the narrower west channel just downstream of the first Russian olive tree on the Island. One can camp during low water on the sand/gravel bar straddling the northern end of the Island, or on numerous higher grassy sites at any time.

The best tent sites of all are actually on the river bank southwest of the Island, but a seventy- yard gauntlet of willow mats and tall grass has to be run to reach the extensive clear areas under the cottonwoods. The more limited number of sites on the northeast bank have easy access to the river but little privacy, so the BLM Island offers the best combination of privacy, wind protection, & river access.

A fire pan set on the gravel bar could safely burn some of the plentiful dead wood on the Island & a hole could even be dug to dip out water to purify. Removing the cobble by hand to leave a sandy, but less private, tent pad would take only minutes, but human waste must still be buried 200' from the river according to BLM Regulations, preferably 6-8" deep.

The 3/8 mile-long island is home to at least a dozen whitetail deer, & while there's no trace of past human visitation, hunters could show up for the deer or bird seasons. Rainbow & brown trout are plentiful in the east channel, with perhaps a few lurking in the pools of the narrower & shallower west channel as well. The larger birds are mainly pelicans, ducks, geese, raptors, & wild turkeys. Raccoon tracks & bobcat / cougar skat suggest that a can of pepper spray and/or a firearm might be useful while camping, especially with small children. The mosquito season is short (late June early July) but intense, with the large & painful prairie mosquitoes (Culex tarsalis).

All but the northern tip of the island is privately-owned, & colored square metal signs mark the boundary between federal (behind the blue side) & no-trespass (behind the red side) lands. State land resumes below the island's south end & onward 3/8 of a mile to 30-acre Big Muddy Pond, which has largemouth bass & green sunfish. With only thirty feet separating the pond & river, your boat can even be dragged across for some bass fishing!

Hint: as weeds take over the pond during the summer, bait fishing with bobbers becomes more productive than with lures.

Being hidden behind the high southwest bank of the river makes the Pond easily missed without prior knowledge of its location, but a scramble up the near-vertical bank is possible on ropes tied to lightweight folding-blade anchors thrown into the bushes like grappling hooks. These small anchors are superb for instantly securing a canoe to any combination of terrain & vegetation without the bother of finding a tie-on point � just throw them out & walk off! Even if your boat pulled free, the anchor would still drag on the rocky bed of the North Platte, unlike a loosened knot!

The remainder of the trip down to Big Muddy Bridge Launch would continue along state land, with the take-out at the Cole Creek Road (Converse County Road #22) River crossing. This official Wyoming Game and Fish access point has shallow gravel banks, parking, and pit toilets, but no camping. Since it's not secure for overnight parking, pick-up should be arranged out of Glenrock (six miles to the east) or Casper (sixteen miles to the west).

This float trip follows a three-foot per mile river gradient along a riparian forest of cottonwood trees, Russian olives and willows in a near-wilderness environment minutes away from large communities. The widening forest & lowering banks increasingly hide the surrounding prairie as one is floating downstream, giving the River a more "eastern" feel compared with the upper sections. The short stretch of railroad visible (and audible) cross-river from the Island would be one of the few reminders of nearby civilization. 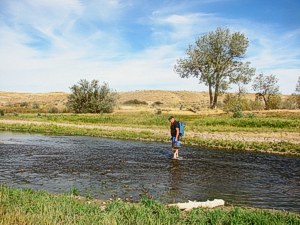 Time-pressed weekenders wanting to overnight this trip would most likely put-in after work on Friday & float/fish down to their camp site before dark, explore Big Muddy Pond on Saturday morning & then take-out Saturday noon/afternoon. The maximum two-to-three hours actually spent floating would still leave plenty of time to fish, hunt, camp, or watch wildlife.

Those wanting to avoid a "bootleg" launch at Coal Shadow Road Bridge could put-in at the more-developed Edness Kimball Wilkins State Park boat ramp eight miles farther upstream, but this would add three to four hours of float time.

This trip is an easy, if sometimes shallow & rocky, Class I float, so any canoe or kayak drafting 6" or less should have little problem regardless of length or design. However, polyethylene (Ram-X) canoes like the 17' and 15' Coleman or Pelican models with their wide & slick, scratch-resistant hulls seem to be made just for this kind of water, especially with the lower flows (1,000 CFS or less) during the "off" season.

The float breaks down as follows:

Put-In requires lowering your boat from the bridge, no parking.

Take-Out is at a State-owned day-use area, overnight parking not secure.