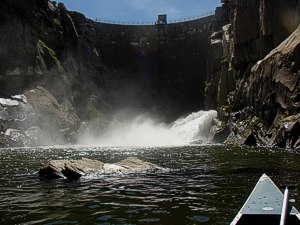 This object of this Day Trip was to paddle upstream to the otherwise inaccessible Pathfinder Dam. Built in a sheer-walled canyon with mortared granite blocks in 1906-1909 and with a 400' long rocky pool below, the Dam at 214 feet of height and 432' width is an impressive sight and a regional tourist attraction, especially when overflows down the hewn granite spillway end in a 100'+ waterfall audible for miles.

During our trip most of the North Platte River was diverted to below-ground power-generating turbines 2-1/2 miles to the east, so we were paddling against only the 400 CFS released immediately below the dam to benefit the downstream fishery.

Access to a nearby pair of Launches is by a well-maintained, high-crowned, all-weather gravel road suitable for two-wheel drive, low-clearance vehicles, & either Launch can be used to approach the dam: The Pathfinder Dam Suspension Bridge Upper & Lower Launches are both located near the east end of the canyon.

The Upper Launch has vault toilets, a concrete wheelchair (portage cart) trail to a guard-railed fishing platform for the disabled, & a 25-yard moderately-steep direct carry from the parking lot to the water.

The Lower Launch, about 250 yards downstream, has a 20-yard less steep carry on gravel & grass, but with no facilities except a shoreline wheelchair trail & some park benches at water�s edge. A gauge station resembling a bell tower on the far shore makes this Launch hard to miss. 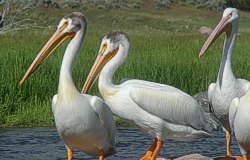 We put-in at the Lower Launch for the flock of white pelicans waiting to be photographed there as well as the extra distance this would add to an already too-short outing!

As we paddled down to the pelicans, the channel got narrower & shallower but the current remained too slow to mark the moss-covered rocks almost invisible beneath reflections. We scraped on a few of those while photographing the birds in a freshening breeze.

Returning upstream we passed both of the Launches, the suspension footbridge, and some fisherman wading into the canyon. Blocked by the rock garden just inside the canyon mouth, we prepared to line our canoe upstream rather than attempt the 50-yard portage over an ankle-turning, solid carpet of rounded 2-3' boulders.

Lining was tricky with the water between each rock deeper than my launch/pullover boots & with the aluminum hull / deep keel grabbing onto all the rocks contacted. Luckily, two young fishermen who arrived in shorts and wading shoes helped me push the canoe upstream to the slower and deeper water of the upper pool, which is also home to rainbow trout down to 10" and brown trout up to 17 lbs!

Though unencumbered, my wife was still unable to cross the boulder field, so I now had to paddle solo up the 400 foot-long pool below the dam, scraping along the south canyon wall to avoid the strongest current. We had originally planned to skirt the south side of the 400 CFS discharge stream angularly- discharging from the Canyon's north wall, then land in the shade at the foot of the dam and enjoy a mist-cooled picnic lunch. However, the air turbulence and increasing chop I encountered as I approached this horizontal waterfall convinced me otherwise, so I reluctantly turned back 75 yards from my goal. The current in the pool would have likely carried a capsized boat and anyone clinging to it back to the rock garden and a routine walk/paddle back to either of the Launches. However, with photo gear, loose equipment, & a prior promise to return shortly, I turned it around.

Lining solo downstream was easier with the help of the current & a small, 4-bladed, grappling anchor attached to the stern line, which, when thrown into the boulders, held the boat back while I rock-hopped ahead with the bow line. The slime on the wetted rocks was intermixed with rough-textured "witches hair" algae (Cladaphora) which added traction. After rejoining my wife below the rock garden and conversing with a couple fishing out of an inflatable kayak, we paddled down to our take-out at the Lower Launch. 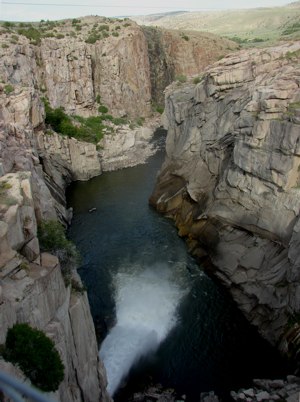 An hour later I photographed the upper pool from the top of the Dam.

This strenuous journey seemed much longer than the 3/5 mile round-trip actually traveled due to the diverse terrain, upstream-downstream lining, & the fascinating features of the dam and horizontal water discharge. On the other hand, strong, agile paddlers with wading shoes, wet suits, and short, lightweight play-boats could easily round-trip this in less than an hour � especially if extra gear and the picnic lunch were left at the car, and time wasn�t spent chasing pelicans with a camera! Regardless of the size of boats used, I believe lining will always be safer than portaging over that boulder field, especially in wet weather. On the plus side, this lining/ portage barrier, short as it is, adds to the solitude of the Dam & the pool below it by filtering out casual paddlers.

I'm not sure how the difficulty of this trip would increase with flow, although in major flood conditions, (15,000 CFS spillway overflow) the current would be too swift to paddle upstream, & the dam approach suicidal. Whether in a drought or flood year, the best time for this trip would be the low-flow conditions before & after the summer irrigation season when large water releases are sent to agricultural users downstream.

32-1/2 miles SW of Casper on Highway 220, turn left and drive through the Town of Alcova, then cross the North Platte River going south past Alcova Dam for a total of 5-1/2 miles. Take the right fork in the road toward Pathfinder Dam. Drive west 5-1/2 miles through pink granite canyon country and turn left down to and across the river bridge, then keep to the right while heading west toward the swinging bridge at the mouth of the canyon, which has a parking lot with pit toilets (total � mile).