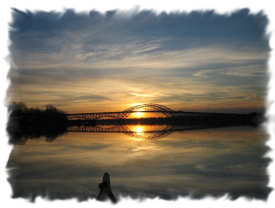 I feel very fortunate to have convenient and frequent access to the Niagara. Depending upon the time of year the various paddling conditions are quite diverse. In addition to the seasonal changes which offer lovely scenery, the water itself metamorphosis�s between anywhere from serene to chaotic.

Let's first take a look at the Upper Niagara:

At its very beginning, the River forms at Buffalo with the mouth of the River emanating from Lake Erie. One can begin from the Lake and paddle into the River. The only rub here is that you will be drifting for a couple of miles in a 17 mph current with frequently occurring chaotic "swirls". As long as you are good with your paddle you will likely find this area fun. Given the current speed you will naturally require transportation back as reverse travel will not occur unless you utilize the Lock, for which you'd do well to pack a marine VHF radio for communication with the Lock Master. He will usually insist that you travel through the lock tied up to the company of a larger power vessel.

Weather conditions can often influence the water somewhat rapidly in this area. Therefore I would suggest a weather radio. If you have a Marine VHF it will likely have that feature. It's worth noting that as the entire Niagara creates a border between the US and Canada, the unfortunate necessity of law enforcement is often encountered. A VHF radio is not only an excellent safety concern; it also serves well if the occasion arises that you may wish to travel between countries without prior announcement/approval. 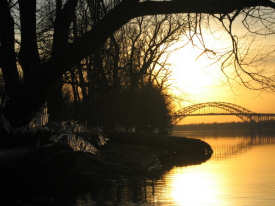 During that rapid slide downstream you will have passed beneath the Peace Bridge, our area's most widely traveled international crossing. Next will be the International Bridge, a railroad only crossing. As the current diminishes your first landfall will be Strawberry Island, a small island with a small beach with a stated carry-in/carry-out policy. In the kinder months you will likely encounter power boat picnickers anchored at the beach. On the opposite side of the island you will find an elongated shallow cove which I often visit to admire the varied waterfowl... respite from wind is a nice coincidental feature as well. The fisherman will find this area to be fairly prolific.

Upon passing Strawberry Island you'll have a decision to make. Whether you opt for a quieter and slightly more scenic paddle down "West River", or choose the more suburban/industrial/powerboat-frequented "East River" your decision will always be correct. Both routes are uniquely their own. Each direction is separated by Grand Island... by enormous margin the largest of any island in the entire Niagara River. Whichever your preferences, you will have an approximate 2.5 mph current in your favor with prevailing winds at your back.

If you were to select the East River you will enjoy, if not be challenged by countless (dependant on weather) powerboat wakes ranging from ripples to riotous... a feature I find most attractive as living inland it saves me a long drive to large wild water. These wakes can easily satisfy a fun and technical paddling desire. Again, the wakes tend to be considerably greater on the East River. On this portion of the River, as with most, you can easily find rest or respite as the shorelines are mainly of shallow inclination.

The East River option also provides access to the Erie Canal. From here you can traverse the state in the kinder seasons while the numerous locks are operable. In the colder months, your trip would terminate after approximately 15 miles as New York State closes the canal system until spring. 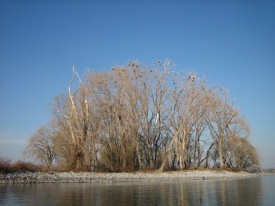 The path around East River will take you to just about the furthest point you would like to consider short of the falls... Navy Island. A Canadian property, this now heavily treed mass once was a busting warship repair depot dating back in local war history. As with all things Niagara, it is steeped in rich and intensely interesting local history.

Consider now that we have taken West River. From the common "fork" at Strawberry Island we'll now travel by Beaver Island State Park on our right and Canada to our left. Beaver Island contains full recreational amenities and a nice little island to pass around.

After that it's a fairly straight and picturesque voyage until you reach the furthest and northern-most portion of the island. Again, the last reasonable stop will be Navy Island as the falls are the only remaining downstream feature. Until that is, that you may consider paddling the Lower Niagara River.

Let�s take a look at the Lower Niagara:

The Lower Niagra is a thoroughly different experience from that of the upper. The section that can be paddled is approximately 5 miles long- beginning in the Town of Lewiston and ending at Lake Ontario.

Public access at Lewiston is possible, yet it seems that the more favored "in" is nearly all the way downstream at Lake Ontario in the Town of Youngstown. There, you will find Old Fort Niagara. A destination in and of itself, the Fort is a well maintained historically rich feature in very close proximity to the public launch at the State Park. It is also within a very short distance from a US Coast Guard Station.

I mention this as being the more favored as from my polling I find that folks would rather start here and go upstream first so that the return trip can be much more relaxing with the current. This drift is important as the setting for this paddle is punctuated by majestically high, rough escarpment "walls". I have found that paddling any further than the Lewistion-Queenston bridge (this area's international vehicular crossing) high overhead is the physical limit for upstream travel. As the area under the bridge represents the most narrow portion of the entire Niagara River, the current is consequently the greatest. I have been tossed by the current as so much driftwood for merely having attempted a downstream turn. 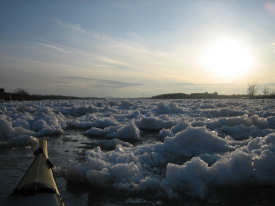 In closing I would like to appraise you of what I feel is one of the most beautiful and unique qualities of the Niagara... late winter/spring paddling. During this short yet nearly unbelievably striking period, the river is subject to enormous flows of limitless sizes of ice. This ice, retained by the "ICE BOOM" is a rare privilege to paddle amongst. The Ice Boom is a man-made floating span that prohibits the free passage of ice from Lake Erie onto the River. This is withheld due to consideration for both the hydro-electric plant downstream and excessive property damage.

In any event, both routes are rich and satisfying day trips certain to delight the paddler looking for great diversity while maintaining tolerance for the occasional if not frequent trappings of industry and development.

If you should find yourself visiting the Niagara region and paddling might not have been part of your itinerary, it would be well worth your while to add this as adjunct to your already obvious fine taste in travel and entertainment.

Countless Hotels, Motels, restaurants and fuel are located within a short drive, as our proximatey is such that our one-of-seven wonders in the world is in our "backyard".

Although there are municipally operated slips (which often allow access with kind request), there are enough entry options to avoid even that.

Depending upon your inclination for the upper or lower Niagara your best bet is to access either from Interstate 90 and make your selection based upon clear signage to Buffalo, Tonawanda, North Tonawanda or Niagara Falls.


For our friends from the north your access runs in one road from the Peace Bridge, at the beginning of the Niagara at Lake Erie, clear through to the terminus located at Lake Ontario.

(This speaks to US and not Canadian access, as my knowledge of theirs is too limited to be of service.)

Numerous, but not yet bountiful access to the River can be found in any township. I often put in on the Erie Canal approximately 1.5 mi from the upper Niagara. This allows me to get up to pace prior to going upstream against a 2.5 mph current.

As there are many marinas on the upper River it is not uncommon for owners to allow casual access pursuant to a courteous request.

Buffalo, Niagara Falls, Tonawanda (North, Town and City) and Grand Island Chambers of Commerce. My estimation is that might serve as well for information on the Canadian side.