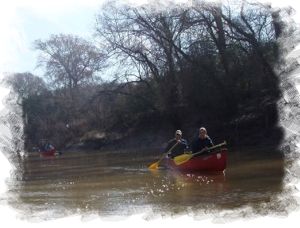 I started by putting in at the Hwy 30 bridge and planned on making it to Hwy 6 by nightfall where we left vehicles. Myself and 7 other people piled into 4 canoes and brought some provisions and beer. I also brought extra clothes just in case someone got wet. It was a bit windy and cool, but a nice day. We were on the water around 9:30am.

The water was flat and higher than usual, but there were numerous trees and other brush piled up that made the river impassable in some places. We had to pull out a few times, but nothing too bad. Many trees that made navigation difficult also imposed problems. 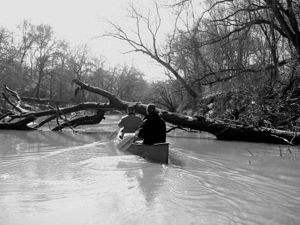 Around 18 miles downstream, when the Navasota River gets at its closest point to Hwy 6 before heading north again, posed a huge problem. There were trees growing in the river which we hit around 6:30pm. It was dark at this point and we ended up having to ditch the canoes on the riverbank at that point and hiking back to Hwy 6 to come back for the canoes in the morning.

The next day we came back for the canoes and the landowner was very friendly and allowed us access to his property. When we got back down to the river we noticed that about 100 yards downstream the river was cleared out which would have allowed us to continue all the way to Hwy 6.

If you plan on doing the run from Hwy 30 to Hwy 6 plan to be on the water around 6-7am to allow plenty of time to finish before nightfall. It was very slow paddling due to the numerous oxbows that the river made, and we were fighting the wind the entire time. Also bring flashlights just in case if it takes more time than planned.

Private property on both banks the entire trip.

Starting in College Station, TX, take Harvey Rd. north to Hwy 30. Turn Right and drive until you reach the Navasota River, which is also the county line.

I recommend following the river on Google Earth and carry a GPS or map.