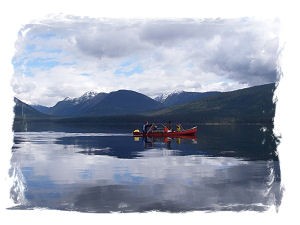 We packed our food, camping and canoeing gear on the morning of Friday, September 4th 2009. Everything that is required for a four night wilderness canoe camping trip fit nicely in my 1998 Honda Civic and at 9am Alberta time, we were on the busy streets of West Edmonton, heading towards Hwy 16 West. Our destination was Murtle Lake, B.C., where we were to meet with our friends who started their drive the same time from Vancouver.

We were planning to do a joined family canoe-camping trip for some time now, and as we had spent the summer on mostly local outdoor activities and family visits, our last chance to spend time together was the September long weekend. We decided to go to Murtle Lake because it is half way between Edmonton and Vancouver, so both families have to do the same amount of driving. We also picked it because of its many sandy beaches that promised lots of fun for our children and because no motorized vehicles and power boats are allowed near the lake.

In the week leading to our trip we have been checking the weather forecast on Weather Network and Environment Canada websites. The forecast showed seven days of rain and temperatures between 5 C and 17 C. This was nothing unusual for a BC interior location, so we continued our planning and packing and secretly hoped that the meteorologists were wrong.

The drive to Blue River was very enjoyable. We made one stop at Edson's Team Horton's for coffee and another stop for gas in Hinton. Our next stop was on the other side of the Rockies, on the Moose Lake, where we had a snack break and built couple of Inukshuks on the rocky beach. We arrived at the Blue River camp site at 4 pm, BC time, which is 5pm AB time. The next morning, on Saturday, we drove for about 25 km on a very dangerous gravel road to the Murtle Lake parking lot, unloaded and started portaging our gear down to the lake, on a scenic 2.5 km hiking trail.

Earlier, during our trip planning, the portage had been our main logistical concern, as we did not own a canoe cart. One option was to rent it from the Blue River camp site, and another one was to buy. Fortunately, Santa came early this year, and it had a dog named Gimli. Mark and the Ceyana Canoe Club had allowed us to borrow the club's brand new cart. This cart, made by Clipper Canoes in Abbottsford, BC, is very easy to disassemble and assemble; it is very light and very tough. Just the thing we needed for the trail full of rocks and roots. We had to do the portage in two runs, as we had two canoes and only one cart.

We were on the water at 2pm and started our paddle through the Murtle Lagoon. The weather was nice; cloudy, but no sign of the earlier forecasted rain. It took us about 45 minutes of easy paddle to reach campsites 1 and 2 (reference: BC Parks map). Our goal was to go in to the west arm of the lake and, with some breaks along the way, reach site #4 before it gets dark. Once we left the Murtle Lagoon, we got some winds coming from North and East. We reached the site #3, the Sandy Point beach, after another hour and a half paddle. We made a short break, looked at the maps and after evaluating our paddling speed vs. the distances and the weather, we decided to change our goal for that evening to site #11, the Leo Island. 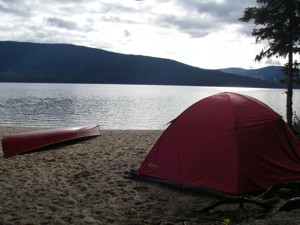 As we continued our paddle West, we experienced some stronger winds coming from North-East, some bigger waves and a few drops of rain. We paddled by the beautiful Fairyslipper Island and reached the Leo Island at about 5:30 pm, and landed our canoes. This small island has nice sandy beaches, nice green forest and a nice deepwater bay lined with black boulders. One camp site was already occupied by a young couple who were busy cooking dinner. Their camp was on a very nice spot in the South-West beach and there weren't any more good sites available, not for two families with four very active children. So, after some arguing, we decided to move on to site #5, the Tropicana. We couldn't leave right away, though, as two of the kids undertook exploring expedition of their own and it took us some 15 minutes bushwhacking and yelling until we found them and brought them back.

The paddle to the Tropicana site took another 30 minutes. The Tropicana is a very nice site, with beautiful long sandy beaches, nice trail network to access the bear caches and the outhouse. The down side is that the waterline is somewhat muddy and I suspect that there would be more mosquitoes in a warmer weather, in particular close to the marshy channel on the South-East of the campsites. The best spot on the beach was already occupied by a nice young couple from Kamloops, who had canoed here many times before and came to be a source for some good advice. We found a nice spot on the South-East part of the beach, big enough for two tents and the cook site. As the weather got worse, we set-up our tents and the cook site in a hurry and started cooking and getting the kids ready for bed. In September in BC the days are much shorter than what we are used to from our summer river canoeing trips in Alberta, something we overlooked and paid for by stumbling over our untidy campsite in the dark. The rain continued during the night and there was some wind as well.

On Sunday we woke up on a nice fresh sunny morning. The kids went on exploring the beach and we took it easy with preparing breakfast, weatherproofing our cook site and planning our activities for the day. After chatting with our neighbours, we decided to paddle to the Diamond Lagoon at the far west point of the lake and spend the rest of the day hiking to the McDougall Falls. We made lunches, packed some snacks and water and started paddling. Our canoes were so light and fast now, as we left most of the gear we had carried the previous day at the campsite.

It took us about two hours paddle to reach the McDougall Falls trailhead, after some slow negotiating the shallow rocky waters of the Diamond Lagoon. The weather was nice the whole way, mixed sun and cloud with winds in our backs and waves big enough to make for an exciting ride. The hike is about two hours long if you stop occasionally to pick raspberries, blueberries and admire the abundance of natural beauty that BC rainforests offer. We made a nice lunch break while enjoying the sight of the waterfalls from the viewpoint at the end of the hike. On our paddle back, we had winds in our faces, some nice waves and some rain drops.

Back at our campsite we realized that while we were enjoying fine weather on our hiking trip, our camp site had experienced heavier rain and winds. During the evening the weather got worse and we started evaluating our options for the next morning. We decided that if the bad weather continues, we should start packing and try to reach the campsite #3, so at least we have shorter distance to cover on our last day if conditions are still bad.

On Monday morning the winds and the rain were still here, on and off. White-gray clouds were covering the surrounding mountain peaks. We enjoyed our breakfast and later, as the kids played cards seated on tree stumps under the cook site tarps, we lazed waiting for a break in the rain so we can start breaking camp. By noon all our gear was in the boats and we were ready to start our paddle towards the Sandy point. We had the winds in our backs and some rain along the way. When we reached the bay South of the Fairyslipper Island, we entered some stronger side winds coming from the North arm of the lake. As we were approaching the Sandy Point the weather started to clear. 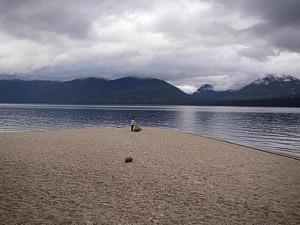 The Sandy Point is a beautiful site with a long sandy beach and a thick rainforest behind it. There was one tent on the site already, occupied by three Germans, but the rest was free for us to use. The rain had stopped by then and the clouds started lifting. As we set our camp it looked very promising for a long beautiful last evening on the lake. We erected a bulletproof cook site and set our tents on each side of it. We cooked big dinner and made an effort to finish the leftover beer and wine. The kids were playing in the sand until late in the evening and eventually came in for dinner. As we started cleaning up after dinner, another rain started, but with our camp perfectly organized we weren't worried at all, and we enjoyed the rest of the evening seated under the tarps and making up a campfire story with each of us taking turns in it. We did not have a camp fire though, because the fire ban was still in effect in the entire Province, but we had some nice candle light going instead. The rain and the wind continued even stronger after we rolled in for the night.

On the morning of Tuesday, September 8, we woke up to a beautiful weather; the clouds started lifting and revealed the first snow on the mountain peaks surrounding the lake. We had a long big breakfast to finish off all the food left over and prepared lunches for our trip back. By that time our German neighbours had already departed and we had the beach for ourselves. The kids were busy playing in the sand, we started breaking camp and packing everything back in the canoes. It became sunnier, and even though the temperature was somewhere between 5 and 10 C, some of us couldn't resist the clean and calm lake waters and went for a quick skinny-dip.

The paddle back to the canoe launch point was amazing. The water surface was smooth; there were lots of white puffy clouds in the sky, not dense enough to block the sun. No wind at all. When we approached the beach at Murtle Lagoon for our planned lunch break we spotted a cow moose wading the lake and munching on the water grass. We landed on the beach for our lunch break and took the opportunity to inspect the site for a possible trip next year.

The rest of the trip was very pleasant, including the portaging and packing the cars. We left the parking lot at 5 pm and drove straight to Edmonton. We arrived home at 2:30 am on Wednesday.

Things to consider if you are planning the trip:

There is a self registration system at the launch point.
The fee is $5 per adult, kids are free.

Murtle Lake is accessed off highway #5 at Blue River, BC. Drive 27 km west on a winding, narrow, gravel road to the parking lot. From there, a 2.5 km level trail (canoe-cart accessible) leads to the canoe launch.

The BC Parks website is very informative. We used the maps from that website. Contact the BC parks office for current conditions, fire bans, weather warnings etc. As you get to the Blue River campsite, you can talk to the staff for more specific information.