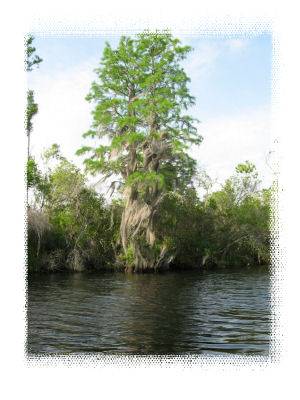 "You should take advantage of Monkey Lake while you still can. It is normally, day use only. But because last years wildfires destroyed some of the campgrounds, the Department of Fish and Wildlife, is allowing camping at Monkey Lake shelter." The proprietor at Okefenokee Adventure store suggested.

The next available Saturday night for Monkey Lake was six weeks in the future, so I made my reservations. The day finally arrived. I have spent the weeks of waiting, cleaning and repairing my camping gear. I now have a new (used) touring sea kayak; it is a seventeen-foot Prijon Kodiak. This would also be the maiden voyage for the brand new Kokotat Gortex spry skirt, and a Bending Branches wooden paddle.

Into the Suwannee Canal, I lunched the kayak and headed into the Okefenokee Swamp with the sun to my back and a gusting headwind to my front. Turn a bend and all vestiges of civilization disappear. The primitive landscape has been here for millenniums and its largest inhabitant, the American alligator has been here for eons.

The first two miles follows a canal dug during pioneer days in a failed attempt to drain the swamp. The canal is straight and about twenty-yards wide. Pond cypress, bay, and blackgum trees cast a comfortable shadow while hanging stands of Spanish moss paint a picture of the Old South. Sweet-zhweet-sweet, songs of warblers, and drumming taps of woodpeckers, serenade paddlers, and go unheard by motor boaters. 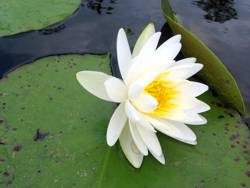 At a junction, the canoe trail turns south into an open-water prairie. The trail starts to narrow and within a half a mile is no wider than the 220 cm paddle. At times, it becomes farther constrained forcing me to pick the insertion point else, the paddle becomes entangled with moss and lily pads upon extraction. Aromatic white water-lilies, intersperse with purple prairie irises, and other colorful blossoms line the path. The voices of the southern cricket frogs keeps a lone paddler company but are silenced when one approaches. Occasionally the paddle digs into the peat, but the main channel is deep enough to float a canoe, kayak, or skiff.

It took me three hours to cover the seven and a half miles to Monkey Lake Shelter. The entrance to the dock was choked with floating peat. A three-foot alligator watched from beyond a paddles length as I struggled to leverage and pole my way to the dock. The shelter is a platform 24 by 24 feet, with one-half covered in a tin roof. A wooden picnic table, violated with incised names and dates, is the only amenity, and a port-a-potty is the only service.

When camp was set, I paddle two miles farther south to fish at Buzzard Roost Lake. After a few minutes of casting and reeling in my bait worm, I notice a ring of eyes watching my every move. Like a pack of wolves closing in upon a meal, from a safe distance a half dozen alligators watched, and waited for a fish to be hooked. At which point they would rush the fish. I had seen this game before, and being alone, I did not want take any chances of an aggressive alligator following a caught fish onto the kayak, so I discontinued my fishing and return to the shelter.

One party per night is allowed on a platform. The nearest platform is ten miles away, and the only neighbors are reptiles, insects, birds, and mammals. I play a game to recognize as many sounds as possible, but none is more primitive than the rattle of a sandhill crane, or the resonance of a bull alligator. The riveting, grunting, and rasping voices numerous frogs, treefrogs, and toads creates a nightlong symphony that lulls anyone to sleep.

With a tail wind, the return trip was faster. I agreed and was thankful for her comments, "take advantage of Monkey Lake, while you can." It is an unspoiled and unique wilderness adventure.

Five dollar entrance fee - for day use. Ten dollars per person per night. Must have permit.

"A Naturalist's Guide to the Okefenokee Swamp" by Taylor Schoettle