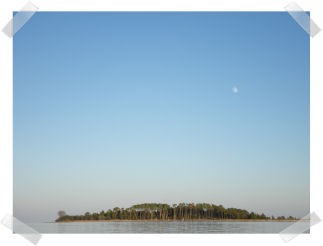 Mockhorn is one of the Virginia Barrier Islands that line the Atlantic coast on the southern tip of the Delmarva Peninsula. These are low lying, marshy islands separated by a labyrinth of sloughs, bays and channels. The barrier islands are on the migratory flyways of many bird species and are renown for bird watching. Most of the islands in this area, which include Smith, Fishermen's, Raccoon, Wreck and Mink islands are uninhabited. Many are controlled by the Eastern Shore of Virginia National Wildlife Refuge, and my two trips to this area utilized the ESVANWR launch (see link below).

When the wind isn't howling on the island, you can hear airplanes and sound of far off highway traffic. You can see the Chesapeake Bridge Tunnel from the south end of the island. Years ago the island hosted a hunt club and coastal watchtowers. Between the noise and the decaying structures, Mockhorn has considerably less backcountry feel than many places, but in reality, the camping on Mockhorn is more primitive, and you are very much on your own (the ranger will NOT be stopping by in a 4WD truck).


I was curious about the history of the abandoned structures on Mockhorn. Somebody poured a lot of concrete walls out there, raised the elevation of a large swath of land, built dykes and water control structures, and constructed a number of non-trivial structures, now probably 30, 50 or more years in decay. 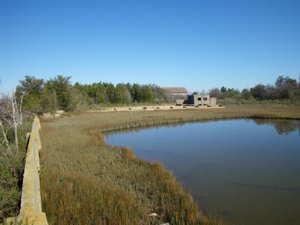 Some internet search time reveals the structures on Mockhorn Island where a rich-mans sporting club from around 1900 to WWII. At some point it was taken over by the military, one would guess around the time the lookout towers were built, probably WWII. At least until 1948, the military continued to run it, at least in part as a sportsmans club (for generals). The concrete walls and water control structures were not for aquaculture, but agriculture. Due to its remote location, the club operated a farm where they grew produce and raised cattle, all of which were used for the feeding of the guests. The walls were to keep seawater out, for the benefit of the farming operation.

There must be several miles of concrete walls. There were docks, generator or pump houses (I saw the remains of engines) and just a hell of a lot of infrastructure. It must have been a very expensive operation, but I guess nothing was too good for the robber-barons. Apparently, the captains of industry liked to dominate while they recreated, too. The volume of water fowl and fish killed were said to be prodigious, and my guess is that two words the clients never heard were "bag limit".

Paddling the Area
You can stop at a tackle shop on the way down Rt 13 and pick up the GMCO map, but do note the compass rose. North is a little tilted to the left. Advanced paddlers enjoy playing in the chop formed by the interplay of tidal currents and waves in the Ocean inlets. There's miles and miles of paddling.

From other kayakers I learned Magothy Bay (the body of water between Mockhorn and the Eastern Shore mainland) is known as a shark breeding ground and nursery. One local kayaker advised that Smith Island Inlet is also not a great place to swim because of the "big fishes". This is all hearsay to me. Yeah, you read it on the internet, but it may or may not be the case. They also reported paddling with pods of dolphin while playing around in the chop in Smith Island Inlet. The report on Fishermen's Island, elsewhere in Places to Paddle, also mentions paddling with the dolphins, so it must not be uncommon. 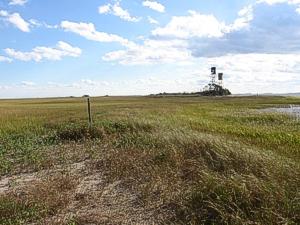 Hazards
Mockhorn is a barrier island, like Assateague. It is basically a big marsh. I have avoided it during bug season, same as Assateague. Beware of winds and keep a weather eye. There's not much land mass at the tip of the eastern shore, so you are basically out in the Atlantic. It can quickly get windy.

Definitely stay aware of the tides. The channels have noticeable tidal currents, and I don't know them well enough to predict which way each channel runs on each tide. I think the tides can produce currents in some channels and inlets that would require a lot of effort to overcome. Also, I think it would be easy to become tidally marooned by a lack of water in the expanses of shallow bays and marshes. Don't leave your boat where the tide can float it away on a rising tide.

Navigating the marshes is challenging. Map, compass and possibly a GPS are extremely important if you wander into the marsh.

Primative camping is allowed on Mockhorn Island. Mockhorn is miles long, but most of it is marsh. The higher spots I know of where a tent can be pitched are on the southwestern side of the island, which is the first part of the island you will reach after crossing several miles of water. The first spot is near the cement wall you will see as soon as you are on the Virginia Inside Passage (VIP), a canal you reach soon after leaving the ESVaNWR launch. Paddle straight out the VIP and land on the beach to the north side of the wall. Take care to avoid the cement and steel debris, remains from the walls. Landing at low tide, you'll have to cross a long stretch of tidal flat, but the bottom is fairly solid (and littered with oyster shells--easy to scratch the bottom of the boat) and you can walk on it. There are two clearings in the cedar grove near the derelict lodge.

You can find a few other dry spots by heading north along the shore, some near the abandoned lookout towers, some about a half mile south of the towers.

Beyond these few spots, the Island is mostly low and marshy. There may be other patches of dry ground out there, but above are the ones I know.

There are no facilities of any sort at the ramp or on the Island. Carry your water with you, there is no fresh water on the island.

To my knowledge there are no ramp or usage fees, except the new $10 ramp, which I didn't use.