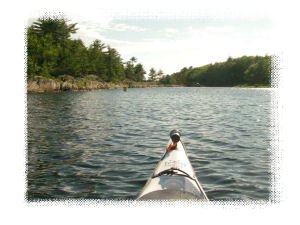 This Ontario Provincial Island Park has been established only relatively recently, sitting on the southern edge of what is referred to as the 30,000 islands section of Georgian Bay off Lake Huron. I had paddled the outer edge of it once before and encountered a stiff SW wind which produced 10 foot rollers out beyond what I refer to as the barrier islands. I love the rough water, and the fact that its clean clear, blue, salt free and shark free are just additional incentives to practicing my crest riding and roll recovery. Coming back up clean is a wonderful feeling!

The main access point is Petes Place off a little road called Healy Lake road, this is about 2 hours due north of Toronto. The exit off of Route 400 is #189, and you head north on Hwy 69 about thee miles just to the Route 11 turnoff to Mactier. Mactier has almost everything one could need including a LCBO. The interesting park of the Ontario provincial parks is that the province considers your tent to be a residence, and allows alcohol consumption at your campsite. Im not condoning it, but its nice to open a nice chardonnay chilled in Lake Huron to have with dinner. And the fishing is fantastic. I caught perch and walleye and didnt dip into my dried meals. 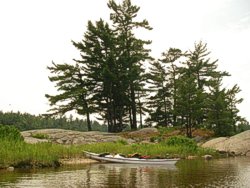 Massasaugua Provincial park has about 135 campsites, all on the water. When I arrived in early June, the self service kiosk was the only way of picking my site. I could have made reservations, but had a couple of campsites that had been referred to me and I was exactly sure where I wanted to be because of the season (black flies) as from previous northern camping experiences I had learned facing the wind head on off the water pretty much kept the bugs at bay. Literally

I decided on site 325 (and although not close 326 & 327 were also my top places to book should I return to this park). Its an interesting paddle on the way out, GPS definitely helping (and the park nice enough to give coordinates on each site in their brochure). One must pass through several large bodies of water, on the way passing through 2 well marked narrow channels.

After reaching the larger section of the bay which is littered nicely with islands everywhere, its simply a matter of which route you want to take that affords protection from the wind. Although the wind wasnt an issue, I knew it could be at times. I paddled about 9 miles out to my site, the only people I saw along the entire way out to camp was a man with his three daughters in a canoe who were water camping for the first time. While there are a few cottages out among the islands, most islands are deserted. 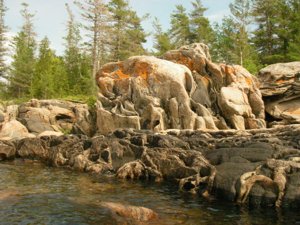 The views were spectacular, glaciated granite outcroppings everywhere, with small beaches tucked into coves. It reminded me of the 1000 island area of the outfall of Lake Ontario in the St. Lawrence River, but without the boat traffic and without the current.

I spent three glorious weekdays just fishing. And thank you to the State of Michigan, for running the wonderful tourism commercials I heard in Toronto. Those Michigan radio commercials suggesting that we all need to occasionally just hang up the sign gone fishing and get away from it all. Thanks Ontario, for providing something much closer for me. I paddled, swam and enjoyed all this park had to offer. And I learned something on this trip. Mosquitos have a natural predator besides fish. Thousands of dragonflies were hatching and kept my campsite free of bugs. While on the first night out, the forecast was for clear skies. Only once before had I slept without the cover on my Kelty tent (in the Everglades during Christmas-New Years). There is something special about sleeping out on a remote island, with a care in the world, without even a tent cover blocking my views of a sky filled with bright stars and galaxies. The only sound, the lapping of gentle waves on a beach 20 feet from my tent.

Yes, $9.90 per person per site. A great deal for the solo camper