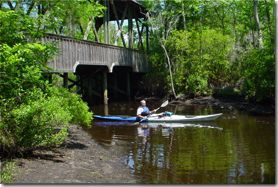 This was the first of a series of day trips during a weeklong visit to the Outer Banks with some members of my kayak club. Colington Island is on the Roanoke sound side of the barrier island just west of Kill Devil Hills and between Kitty Hawk to the North and Nags Head to the South. Jersey Shore Sea Kayak members, Tom Kelly, Ray Brower and I launched on the north side of Colington Island at 9:30 am into the wind protected waters of Blounts Bay. Air temps were only in the mid 60's (about 15 - 20 degrees cooler than the avg for this time of year) and winds were mild. We paddled northward up past Sloop Island and into more open wind prone waters of the Kitty Hawk Bay. After a three quarter mile crossing of the bay we paddled to the west of Hog Island and into the more wind protected and tranquil waters of Jean Guite Creek also known as the Kitty Hawk Woods Martime Forest. As we entered the creek we immediately began to see wildlife. Our first spotting was of a red fox, then we saw plenty of nutria which look like a cross between a large muskrat and an otter. In the 4-mile stretch of the creek and forest we also saw a pileated woodpecker, a yellow warbler, raccoons and a black water snake scurrying to the shore with its head up out of the water as we approached. While eating lunch near a covered bridge we chatted with two women riding horses on a trail and also watched a rather large water moccasin slither atop the water past our boats and under the bridge. 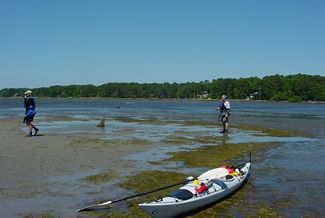 As we paddled the creek under Route 158, we approached an area where two local attack swans are notorious for ambushing paddlers, however I was glad we didn't spot them. We later found out from a local person that late last year, the swans mysteriously 'disappeared' from the creek. They were reportedly 'relocated' to another less paddled area. As we paddled northward, the creek widens and becomes Ginguite Bay right before the Currituck Sound. On the western shore, we admired some very large waterfront homes of the gated community of Martin's Point. We also watched osprey flying overhead with fish in their talons. Entering the Ginguite Bay, we encountered some strong headwinds, which made paddling the last mile to the Currituck Sound more challenging. We were determined, however to make it to Mill Point where we could have a beautiful vista of the open and shallow Currituck Sound which was raging in the progressively increasing winds. We landed on a small peninsula at Mill Point to relax, stretch our legs and enjoy the view for a while before we returned on our 9-mile paddle back to Colington Island. We kept a steady paddling pace all the way back and landed at about 6 pm. The total distance for this trip turned out to be 18.5 miles. 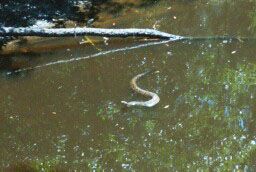 We later had dinner at a very nice local eatery called the Colington Caf The cafwas basically an old house that had been converted to a restaurant. We were seated upstairs in a small intimate room with one other party at a table which looked out over the woods of the island. For a almost two hours, and over a nice dinner, drinks and some laughs, we discussed our day's adventure and our paddling plans for the next few days. After dinner as we went downstairs, we realized the place was completely empty. We had closed the joint and a great day of paddling on Colington Island.