by  LittleRed
A self-supported trip created by LittleRed 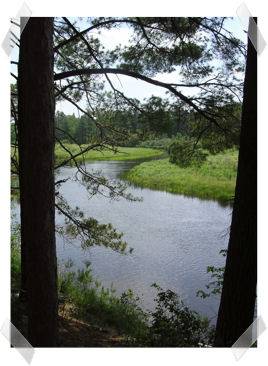 With a squadron of dragonflies as my "fighter escorts," I paddled the Manitowish River from the U.S. 51 bridge, about 5 miles south of Manitowish, to the Route 47 bridge at Manitowish, just off U.S. 51.

The water was a bit low (guess I should've checked the gauge by the bridge), but I only had to get out of the boat once. There was a riffly section right at the beginning with numerous rocks that I had to play "bumper boat" with -- let's hear it for tough plastic rec boats. At higher water, this could be really "fun." A pair of mergansers took off quickly, apparently not wanting to join in my bumper game.

The current, if you can call it that, was rather slow for most of the trip and -- truth be told -- I didn't paddle particularly hard. It was too much fun trying to identify the various dragonflies and damselflies that constantly buzzed me. My favorite of the day were the Ebony Jewelwings -- a 2 inch long damselfly with coal black wings and an electric green body.

The 7 1/2 mile paddle took me about 3 hours. A mile or so into the paddle, there is a small lake. It was there that I saw a magnificent bald eagle. The rest of the trip went through a mixture of wooded areas and wetlands. 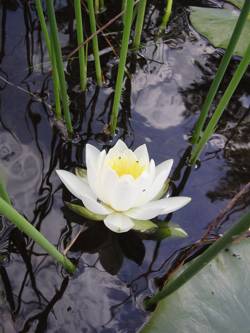 There are at least three designated campsites accessible from the water. I stopped at "Site 52" which had room for several tents on a bluff above the river, a picnic table and fire ring. Nice view of the river from there. Just beyond that there is access to a wayside area along U.S. 51 with outhouses. This is about halfway through the paddle.

I passed a couple of "tubers" with a cooler. At the rate they were floating, they might still be out there. They were the only people I encountered until the takeout, where I caught up with a group of canoes from a "Trees for Tomorrow" trip who were just getting off the water. You can't miss the takeout.

Hawks Nest outfitters runs trips on this section and there is a large sign on a snowmobile trail bridge shortly before the takeout that is river right just beyond the U.S. 47 bridge. These are the only bridges you encounter after launching. I'd recommend this trip for anyone looking for a relaxing float who wants to do some birding or dragonfly watching.

There are no "facilities" at the put-in or take-out other than parking. Use the outhouses at the wayside. This is a major recreational area, so there are numerous public and private campgrounds and motels. About 3 miles farther north of U.S. 51 is Mercer, which has a Subway sandwich shop and a gigantic loon, among other attractions.

Take U.S. 51 to 5 miles south of Manitowish. U.S. 51 crosses the river here. There is a nice put-in downstream of the bridge on the south. There is also a shady parking area on the northside of the bridge (this is where I left my bike after my self-shuttle; less visible from the road). Drive north 5 miles to route 47, the bridge is right after you turn left. An obvious trail leads to the take out.