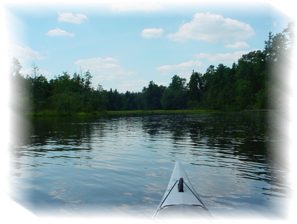 A nice size group of 9 paddlers from Jersey Shore Sea Kayak Association launched into the Mullica River on Saturday morning shortly after 10 am near the Lower Bank Bridge. We rode the flooding tide 7 miles up to 'the fork' near the Sweetwater Casino and where the Batsto River flows into the Mullica. On the way upriver we saw some osprey and stopped at Crowley's Landing for a break. Crowley's Landing is a great place to break. It has restrooms, grill pits and picnic tables. Unfortunately, in the summer, it also hosts plenty of jet ski traffic.

Riding the ebbing tide back down to Lower Bank, we landed at Riverside Pizza's floating dock. Upon our trip leader, Marylou's recommendation, a few of us got strombolies while others enjoyed root-beer floats. While some of us munched on stromboli, Joy pulled out her bag of fresh vegetables and we all relaxed, ate and chatted on the Riverside lawn on the Mullica. It was a beautiful clear sunny summer afternoon. Although the tide was in our favor on the return, we did encounter some resistance from the wind which was enough to work our muscles good on the last few miles back to the take-out. 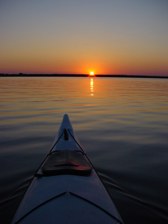 After our 14 mile adventure on the Mullica most were done for the day but Martin and I decided to extend the paddle. He had no curfew and I had nothing to do but set up a tent some time later in the evening at Bass River State Forest. We launched again, this time heading downriver towards Hog Island and the Swan Bay Wildlife Management Area. We were so into the Tao of Paddling that we decided to paddle a little farther than Hog Island before we return. Five miles later, as we could see the Garden State Parkway Bridge in the distance and the sun began to descend over the riverbank, we decided to turn back. On the way back, it was just so beautiful that we stopped a few times to play with our cameras and experiment a bit with the setting sun. The river was relatively flat and there were very few boats.

This river is pure magic at sunset, especially around Hog Island and Swan Bay. After logging 24 miles on the Mullica for the day, Martin and I landed at about 8:45 pm.

There are a number of and public launch sites along the Mullica River.