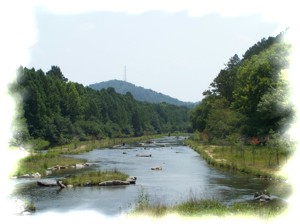 The Lower Mt. Fork River flows ice cold and crystal clear out of Broken Bow lake, through Beavers Bend State Park, spilling out of the Kiamichi Mt. range then through about 20 miles of lowlands to its confluence with the Little River.

This is in Southeast Oklahoma, right up against the Arkansas line. It's part of the Choctaw Nation in an area sometimes referred to as Little Dixie, due to the fact that a lot of Southerners migrated here after the Indian lands came up for sale. There are a lot of hills, trees and rivers here but not many people. Good.

The first 9 miles of the river flows from Broken Bow dam to the Re-Regulation dam. The only place you are allowed to canoe in this stretch is in the boundaries of Beaver Bend State Park. This is about a 2 mile loop and is very scenic with wooded hills and bluffs. There are no serious rapids on this run. It is crowded in Spring and Summer. You can bring your own canoe/kayak or rent one from a livery at the park.

The next place to put in is at Mt. Fork Park, just below the Re-regulation Dam, nine miles below the Broken Bow dam. This is where my trip begins. From there to the take-out on the Little River is 18.8 miles.

The trip took place in July and it was hot. 100 degrees, no breeze, not a cloud in sight. Even so, the river was ice cold. After putting in that morning at the canoe launch at Mt. Fork Park, we threaded our way through a boulder garden that stretches for a good half mile. The flow was only 150 cfs, barely enough to get us through. Once through the garden we stayed close to the left bank which took us into a long swift chute. Coming out of the chute we bore to the right and came out right above Presbyterian Falls. This is a class II ledge drop that extends across the width of the river. At this level its about a 4 foot drop. This is a very popular stretch of river, and was very crowded. We sat back and watched the carnage as kayak after kayak after canoe after canoe went over the falls, about every other one capsizing. Our turns finally came, one of us made it. One took a swim. Nuff said. This is the only stretch of real whitewater on the whole run.

After the falls, the river widened out and slowed down. By now it was late morning. The sun was hitting me from above and its reflection was hitting me from the surface of the river below. My sunglasses were back at camp. The heat was murder, even though I'm from Texas and am used to it. There was some relief at about the 2 mile mark because the river narrowed and the trees from either bank nearly met overhead providing shade, and the quickened current gave us a break from paddling.

At just over 3 miles from the put in we came to the Hwy 70 Bridge. This is where my friend, Chuck, was taking out, and is the last public access for the next 15 miles, although there are private take-outs at the 8, 9, and 10 mile marks. The upstream side of the bridge is public. Many people park their vehicles here under the bridge. The downstream side of the bridge is a private put-in/take-out belonging to Ambush Adventures. A lot of folks were climbing up the bridge and diving off the rail just beneath the roadway. Others were using a rope swing to jump into the river from the bridge. You couldnt do that where I come from without going to jail or at least getting a ticket. Oklahoma really is ok.

Chuck took out here while I continued on. The crowd on the river thinned considerably. Most folks just do the 3 mile trip. Even so I still had plenty of company, almost all in aluminum rental canoes. They were banging down the river, hooping and hollering, drinking and having a good ole time. Several were husband/ wife or boyfriend/girlfriend combos. The breakup rate for couples who canoe must be pretty high, because the males in the stern were usually raising cain with the gals in the bow, highly critical of their paddling abilities. And then there was one drunk chick who by herself was louder than all the dudes put together. I pulled over to the bank and had a drink and a swim to give them all a chance to get on downstream a ways.

The river had widened out again after the bridge. No shade, slow current. Hot, hot, hot! I had loaded the canoe with my camping gear back at the bridge where my truck had been parked, so now paddling had become a little more work. It was now mid-afternoon.

At about mile 4 the personality of the river changed. For the better. It narrowed and sped up over and around gravel bars. The banks closed in and the entire river was protected from the sun. I passed the group of renters who were taking a beer break on a gravel bar. A couple of hundred yards downstream I did the same. After each little riffle where the river narrowed, there would be a nice deep clear cold pool, no vegetation, gravel bottom. It was at one of these spots where I took another swim/drink break. A long one. The renters passed me up. They seemed more subdued then earlier. One said, "Ill never do the 10 mile trip again!"

The river opened up for a short stretch, but the sun was getting lower and less severe. This river is full of fish. I saw largemouth, smallmouth and spotted bass, bream, drum, carp, and lots of shad. The walleye fishing is supposed to be pretty good here, and the upper reaches from Broken Bow Dam to the Hwy. 70 bridge support a world class trout fishery. A couple of young men were fishing from a small johnboat. They would take turns, one paddling while the other would cast, throwing an Arbogast jitterbug close to the bank and working it back to the boat midstream. In just a few minutes I saw them catch 2 nice slim river bass, brilliantly colored, about 2 lbers. They proudly showed me their stringer, which had about 5 more just like them. The river narrowed, and at a pool below a shoal I took another swim and swig break.

There arent many good campsites on this stretch. There are some long skinny islands, but theyre rank with vegetation, all gravel, and would be quickly underwater in the event of a dam release, which is always a possibility here. I found a nice site on the right bank at about the 6 mile mark, the only suitable site I would see on the lower Mt. Fork except for one of the outfitters private take out at mile 10 the next day.

After setting camp up, I paddled back upstream and took an evening swim below a small rapid and got cleaned up. Then back to camp for a supper of beans, cornbread, and summer sausage. I sat out in my chair listening to owls, coyotes and tree frogs. After a while Jupiter came out big and bright, shortly followed by a gibbous moon, framed in the branches of a huge cypress tree growing right out of the river just off the bank in front of my tent. I slept good that night. 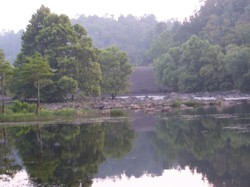 It was already hot when I got up at daybreak. Not in the mood to prepare a bacon and eggs breakfast, I settled for reheated beans and cornbread and of course, coffee. By nine I was on the river. It was already hot.

At about the 7 mile mark houses start showing up on the right bank. Nice big houses, with fancy multi-level decks and stairways leading from high on the bank down to the river. The river was wide and slow and paddling was hot and heavy for about a half mile, then it narrowed and twisted quickly under shady cypress trees, bouncing over gravel bars. Then another long hot pool, then another fast crooked section.

Close to the Little River confluence, the river narrows quite a bit and winds and twists even more. The river is full of dead cypress snags. At high water there would be danger of strainers and sweepers. There were a lot of cows on this stretch of the river, some on the banks, some in the water. Coming around a sharp, narrow, tree clogged bend I came face to face with 2 small raccoons, in a niche in the bank less than an arms length away. They did a classic double take and remained frozen in place as I continued downstream.

Shortly after that the Lower Mt. Fork emptied into the Little River. This section of the Little River is flatwater. The water is clear and clean, though not as crystal clear as the Mt. Fork. It is part of the Little River National Wildlife Refuge. It is about 7 miles from the confluence of the rivers to the takeout at the Ashilintubbi boat ramp. There is at least one public access on river right in this stretch, and 2 or 3 on river left. There are a few large islands on this stretch that are high enough to camp on with plenty of level ground and firewood.

I saw a few people on this stretch, teenagers on a rope swing, then further on a few senior citizens wading in the water, drinking cheap beer and asking me if Id ever snuck up on any skinny dippers in my canoe. There were a couple of shallow spots where I had to drag the canoe, but the bottom is firm and level and easy walking, no quicksand or slippery rocks. There were many great spots to swim.

About 3 miles downstream of the junction of the rivers is a limestone bluff about 40 feet high with undercuts just above the water line that are like small caves. There are many bluffs and limestone rock formations on the right bank and heavily wooded low banks on river left. Flat topped house sized chunks of the right bank have fallen into the river, with trees intact and still growing on them. Id hate to be paddling under a ledge when that happens.

At mile 18 I reached the take out on river left, the Ashilintubbi landing. It is a steep concrete boat ramp. Old Blue, my faithful Chevy Pickup was there waiting for me, all in one piece. Always a good sight at the end of a trip. It was about 4:00 P.M.

Bring water, broadbrim hat, sunglasses and sunblock in summer. River levels vary greatly due to dam releases, so be prepared for that

Mt Fork Park has RV sites and tent sites with electricity and water.