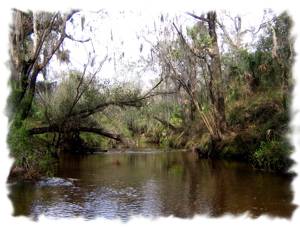 Lost Creek was called that because most of the time it was a dry, sandy and rocky gully that was laden with appliances, logs, bottles and cans as it meandered through Terre Haute, Indiana, on its way to the Wabash River.

Lost Creek passed under North 13th Street four blocks from our home. Before it went under another bridge it dumped into a large gravel pit, from which the creek flowed again, never dry, another quarter mile to the Wabash.

Soon after a heavy rain flooded Lost Creek we enjoyed using cans to catch small fish that became stranded in pools of water, fish that had journeyed upstream from the Wabash after the rain, thinking, perhaps, they had found heaven under shaded trees, only to have it turn quickly into hell.

I was reminded of all this because Saturday, Feb 4, 2006, my current "Little Brother," 13-year-old Josh Lopes, was sick, so I went canoeing by myself in the afternoon.

An e-mail correspondent from Georgia had asked me if I knew of a place where he could launch his kayak into the Braden River, upstream a few miles from Linger Lodge, the famous restaurant, lodge and campground that still attracts people to the woods from many miles afar. 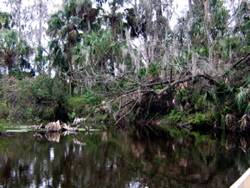 I paddled up the narrow river, and was immediately enchanted by moss hanging from trees. The first thing I thought was that this looked a lot more like a Jungle Cruise than the one near Orlando that has been recently diminished by efforts to make Disney politically correct.

I cruised past a few riverfront properties, but soon I was in the woods and on the water with few of mankind's activities or lodgings to distract me. I heard no warning shots of "fore."

I did notice occasionally, however, through trees, the roof, or the top of a pool cage, of a spread obviously occupied by people of affluence. This was obviously the right side of Lost Creek.

I also noticed the scarcity of wildlife. I saw two herons, and one distant egret, and one vulture overhead. But there were no turles, no fish, no alligators. It was a little chilly, but I thought that shouldn't bother cold-blooded critters.

The sky was blue, the bushes green, sand bars were visible in clear and shallow water, deadfall trees had been left in place. It was scenic for photographers but challenging for solo paddlers.

I paddled more than an hour, once in a while seeing a portion of a rooftop, but never hearing a sound other than branches swishing slightly in the breeze.

I passed under a narrow bridge, but the sides were solid, there were no paths for access to the road, no signs that boys had been camping under the bridge to fish all night. There were no charred remains of campfires, no bobbers and lines tangled in trees, no forked sticks in the ground for holding fishing poles.

Soon after passing the bridge I noticed something out of place, lodged in brush. It was green and yellow plastic, three or four feet in one direction, slightly less in the other. It looked like part of a jungle gym, and it had apparently been discarded by someone who thought this was Lost Creek, where trash would eventually get carried off downstream.

The river continued shrinking, and eventually I came to a brook babbling over rocks and entering the river. I heard it before I saw it, and it reminded me of little creeks entering bigger ones in Connecticut, where I often watched beavers. On this little brook there was no evidence that beavers or boys had ever tried to build a dam.

Soon I came to another bridge, pulled the canoe up on sand and crawled up the bank. There were no footprints or bike tracks. There seemed to be a trail through brush, and I walked up it, and found myself next to a "no trespassing" sign on a well-manicured lawn in Lakewood Ranch, the mammoth new community for people who have escaped or avoided poverty.

The river became shallow and narrow, less than ten feet wide. I paddled over a quarter of a mile with the river never wide enough to turn the canoe around on water. When I came to clearings in the brush, there were no signs that boys had been there.

As I paddled toward Linger Lodge I realized I had seen not one gator, not one snake, not one turtle, not one unusual bird. No armadillos in grass, raccoons by water, deer standing among trees and watching. Just one pig, a docile one at that, apparently without fear of becoming bacon. 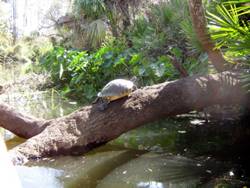 Josh and I launched at Linger Lodge on a much warmer Saturday afternoon than two weeks ago. Immediately I knew this day would be different, because there were turtles all over the place, of all sizes, and I saw fish jumping. I decided that air temperature does make a difference.

The black feral hog was in nearly the same grazing place, and he was near the water, facing us directly, posing for the picture I missed the last time. This time I did not have my camera ready.

Just before we reached our destination we saw a gator, about 8 feet long, slide off a sandbar and skim across the river, with eyes and spinal ridge out of the water.

We noticed, on top of a steep bank, four male golfers, ready to use their drivers. I spoke to one of them. Either he did not hear me or he did not care to hear me. Maybe he was concentrating.

We arrived at the plastic jungle gym. We beached the canoe, and I waded out to the brush where it was snagged. It was heavy, it was bigger than I remembered, and I decided it was wading pool, maybe a sandbox. 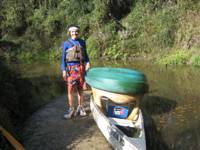 We loaded it, upside down, in the beached canoe. Josh seemed to be proud of our easy conquest. At the time we did not realize how tough it was going to be to get it downriver.

Just before reaching our quarry we had encountered a problem because the water level was lower than when I came solo. There was a log across the river, and the water going over it was not deep enough to float a loaded canoe, so on the way upstream I put Josh on the bank, pulled the canoe parallel to the log, got out and sat on the log, straddling it, pulled the empty canoe across to the other side, stood on the log and got back in the canoe, then paddled over to the shore to get Josh. 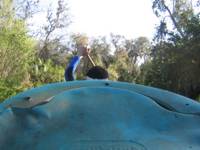 Now here is the best picture, and this was the best part of the trip. With the wading pool upside down and in front of me, I could barely see the top of my bow paddler's head and, without stretching, I could not see the river ahead of us.

On an earlier outing I taught Josh how to alert the stern paddler to upcoming obstacles by saying "deadfall to starboard," or "brush to port," or "tree trunk dead ahead."

He remembered the lessons. All the way back he was telling me what the obstacle was, where it was, what we had to do, when I had to turn the canoe, and when I should straighten it again. I was very proud of his navigation, and he was too.

Josh wasn't excited about bringing the wading pool back after he saw how big it was, but he was glowing at the end of our paddling trip, feeling good about what we did, how well he navigated our little boat and how pleased other people were that we helped clean up the river.

It was a good day for brothers to paddle.

read the full report on http://www.cactus48.com/lostcreek.html