by  Ness
A self-supported trip created by Ness 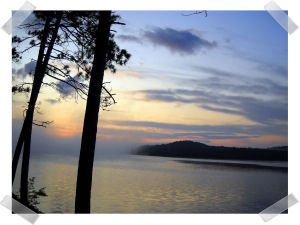 Hopsing and I spent last Wednesday through Sunday canoeing and camping on Little Tupper Lake in the Adirondacks. Weather was excellent, if not a bit too hot for me, sunny and warm. Highs were in the 80s in the daytime, which was great for swimming, and lows in the upper 50s at night made for comfortable sleeping. The first evening of our stay, an isolated cloudburst across the lake (although it never rained where we were camped) created a spectacular rainbow afterward.

Finding a campsite was a bit of a challenge, since campsites are set back from the shoreline, and blend into the landscape, purposely making this wilderness area look as if there are almost NO campsites anywhere. The yellow plastic DEC camp markers are only about 4 inches across, and difficult to see them from far away. In our search, we ran into the assistant park ranger, Keith Hollenbeck, who had stopped to reapply sunscreen while on his paddle around the lake checking campsites. He told us how the lake has a heritage strain of trout that has been there 15,000 years. Disgruntled fishermen, not allowed by legislation to keep any of the native trout, dumped non-native bass into the lake as a sabotage effort. Bass up to 12-14 pounds now abound in the lake, (Hopsing later caught a smaller 4-pounder), whereas the trout population is declining.

After discarding campsite #9 as too buggy and dark, (and thanks to Mike McCrea for the helpful guide to the better campsites), we finally arrived at campsite #11, a small site with a hilltop view of the middle of the lake. We carried our dry bags up the "steps" (and I use that word loosely) and set up camp.

As I was unpacking a contraband full-sized pillow hubby had sneaked into a drybag, I heard a hello from below at the beach. Our friend Riverstrider had indeed found us, as per his word. He said he had almost given up finding us. He must have heard us arguing, and homed in to the sounds as if following a beacon. We chatted about recent trips, shared Coca Colas, and all too soon he had to get back to Mrs. Riverstrider at nearby Eaton Lake campground.

Thus began our vacation on Little Tupper Lake. After camp was set and Hop began cooking, we soon wound down, and began to survey the surroundings. Our site was amidst tall red pine trees, and surrounded by wild blueberry bushes. We tasted the small berries and picked a few handfuls to eat. The area behind our site was a swampy brushy area that was not conducive to exploration, and, unfortunately, a haven for bugs. The black flies were pesky during the daytime, and the mosquitoes sounded like a chorus of lawnmowers revving their engines at dusk. Dave and I doused ourselves with copious amounts of bug spray throughout our stay. Only the occasional wind, or an early night in the tents, seemed to keep the bugs at bay. 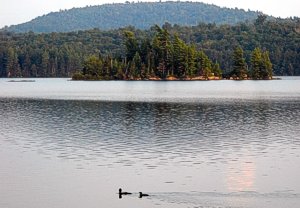 Despite the bugs, which were the only drawback of our camping trip, we had many enjoyable moments watching the other local wildlife. Our entertainment each morning and evening was a pair of loons and their big fuzzy brownish chick. The chick squeaked like a a toy rubber duckie as he followed mom and pop everywhere. The parents constantly dove, then fed their chick. Occasionally "Baby Loon" tried to dive too, but never stayed underwater for long. The calls of the adult loons were always a thrill to hear, and we did hear them both during the daytime, and at night.

Besides the loons, a gaggle of 10 Merganser ducks swam by on their rounds every morning, making quite a ruckus along the shoreline. A woodpecker flitted above our heads in the trees at camp, and even dropped some pieces of pine on us as he pecked away. Sparrows hopped through camp unabashedly. A bullfrog sang a loud croaking song every night.

A skinny snowshoe hare ran across camp on the narrow trail between the blueberry bushes on our last morning at camp. Spooked when he saw us, he ran down the trail to the beach. We assumed he had run away, but suddenly heard a loud, repeated scritch-scratch-scritch noise, like a dog clawing at the door to go out. He had jumped (or fallen) into my canoe, which I had laid partly on the trail, at an angle against the hill. He couldn't get out of the boat. He kept sliding backward into a small puddle in the stern of the boat. Finally, the rabbit managed to extricate himself. Partly wet from the water in the boat, he hopped back up the path the same way he came, wet fur matted to his sides, stopped for a moment to stare at us, and hopped away. We thought he looked a bit... embarrassed.

Our other entertainment was talking to passing canoeists and kayakers. We met a family from Orchard Park, a town adjacent to our home town; a local man in an older, but pristine, sky blue Curtis Ladybug canoe; a man and a woman in a tandem canoe with 3 friendly pitbull rescue dogs, one of which had 3 legs; and a family of 3 adults and an older teen who had brought 4 little children with them in their canoes, and spent each day paddling a side trip, or swimming off the rock islands, with everyone in the group happily joining in. Another group of tandem canoeists told us they had seen a mother bear and cub crossing the stream to Rock Pond. 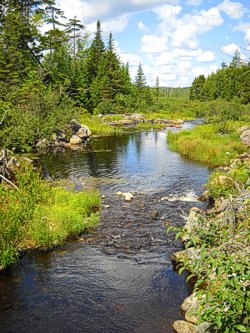 We also paddled a side trip each day. One day, we chose to explore the stream leading to Rock Pond; we portaged two beaver dams, and walked the portage trail, but did not carry our boats and continue the paddle into Rock Pond (too hot for me; yes, I'm a portage wimp). Another day, we checked out the stream to Lake Lila, and were quite awed by a huge beaver dam beneath an old, low, abandoned RR crossing bridge. On a third day, we tried to paddle up to Antediluvian Pond, but the marsh was choked with growth, so we explored the rock formations of the nearby numerous islands instead.

As usual, Hopsing outdid himself with camp cooking. We enjoyed many fine meals, steaks and chicken and pork roast, fresh cucumbers and tomatoes, roasted potatoes, peas and green beans, eggs and sausages and pancakes for breakfast. No wonder the packs are so heavy on the way in...and so much lighter on the way out.

We enjoyed cozy campfires at night as well, as we collected wood while on our daily paddling forays. On the first night we saw a shooting star, and on most nights, we saw millions of stars twinkling in the dark sky above. In the mornings, we woke up to a lake shrouded in thick fog, which gave a sort of heavenly, isolated feel to our campsite.

Our trip on Little Tupper Lake was very enjoyable and relaxing. There was no lack of paddling, the scenery was beautiful, and we were lucky to have such fine weather. We hope to go back again soon.

Little Tupper Lake is relatively shallow and winds can whip the lake into whitecaps quickly. Paddlers should be aware of this.

Unculled (way too many) pix:
http://picasaweb.google.com/Lilredwaz/081209To081609LittleTupperLake#

The William C. Whitney Area is just west of the center of the Adirondack Park in the Town of Long Lake, Hamilton County. It is readily accessible from New York State Route 30, a designated Scenic Byway known as the Adirondack Trail. To reach the area, take Route 30 twelve miles south from the hamlet of Tupper Lake or seven miles north from the hamlet of Long Lake to the intersection with Hamilton County Route 10A (Circle Road). Turn west and proceed four miles to the Little Tupper Lake Headquarters Entrance Road. Here, at the former headquarters of Whitney Park, you will find the main parking area, an information station, and the only waterway access site on Little Tupper Lake.

per NYSDEC webpage at: www.dec.ny.gov/outdoor/9165.html

Adirondack Paddler's Guide: Finding Your Way by Canoe and Kayak in the Adirondack Park, by Dave Cilley, (Paddlesports Press)