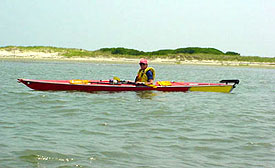 Jersey Shore Sea Kayak Association members Carl White, Tom Kelly, Mike Goodman, John Myers and I launched from Parkertown County Park in Little Egg Harbor Township and into the Parkers Cove section of the harbor at around 9:05 am. Winds were rather mild and skies were hazy which kept the sun from making us warmer than we already were.

We had intended to paddle a clockwise circuit of the Little Egg Harbor but due to the direction of the winds and anticipation of a shift in the afternoon, Carl suggested a counterclockwise direction. We began paddling a southeasterly course towards Rose Point and after rounding it, paddled for the most part, along the shoreline. There was very little boat traffic in this area and we eventually made our way into the Marshelder Channel. By 10:55 we had paddled almost 7.5 miles and decided to land for a short break at a white sandy beach in the Marshelder Channel midway between Foxboro Point and the entrance to Big Sheepshead Creek.

After about 10 minutes we launched back into the channel. We then made a safe crossing of the channel amidst some heavier boat traffic and we rode the remaining ebbing tide out near the Little Egg Harbor Inlet. Review of my GPS track indicated a range in our cruising speeds in this area of about 5.7 to 6.5 mph. At the inlet we sniffed around the choppy confused waters of the Atlantic at the southernmost portion of Long Beach Island and the Edwin B. Forsythe National Wildlife Refuge. After getting a brief taste of the Atlantic, we paddled back along the sandy beach coastline of the refuge, most of which was off limits to boat landing, apparently due to bird breeding or nesting.

At about 12:05 we found a sandy beach in the refuge area that we were able to land on to have lunch. The sun cracked out a little as we ate and as some rather large greenhead flies attempted to lunch on us. We also talked briefly to some friendly jet skiers. At about 12:40 we launched back into the bay and began our northeasterly course along the the Long Beach barrier island in some increasing afternoon haze. After 4.5 miles and our cruise along the wildlife refuge and the town of Holgate, we reached Mordecai Island and the beginning of Beach Haven to our east. With the threat of some afternoon t-storms and the increasing haze, Carl suggested we start to cross the Little Egg Harbor and head back to Parkers Cove which was barely visible in the distance. Mike offered a course heading using his GPS and we started our 4 mile trek across the Little Egg Harbor. The crossing offered a great open water cruise with extended periods of rhythmic rolling swells which allowed me to synchronize my paddling strokes as I rode up and down on them and maintain a nice pace across the bay. In the middle of the harbor, we paddled around what looked like a sailboat regatta. In other areas, some powerboat chop was added and it was just enough to keep the cruise fun and my mind off the afternoon heat.

In my enjoyment of the Tao of Paddling, Tom, Mike and I got a bit too far ahead of Carl and John. As we approached the shore, we saw them in the distance paddling a more northerly course toward the shore. Mike and I landed at the nearby beach where I checked my map and Mike checked his GPS points. After re-orienting ourselves, we realized we were in Rose Cove which was one cove south of Parkers Cove where we needed to be. After we were clear that we needed to paddle about another mile north, we paddled back out to Tom who waited in his kayak offshore. Tom told us that while we were on the beach checking our maps and GPS, he had gotten a relay message from Carl delivered by a powerboater confirming that our takeout was about a mile farther north. After getting ourselves back on track we saw John and Carl at the tip of Rose point. We finally all caught up and made our way back into Parkers Cove. We landed at 3:45 pm after a vigorous and enjoyable 20.1 mile paddle of the Little Egg Harbor.

Left on Brook Street heading east. Brook Street merges into Dock Street, which runs out through the salt marshes along Parker Creek, and ends at Parkertown Park.