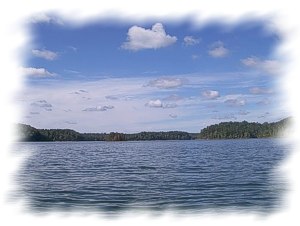 Lake Russell is an impoundment of the Savannah River 27-miles in length between the Hartwell and Russell Dams and forms the boundary between Georgia and South Carolina. Its' eastern arm runs for 18-miles on the Rocky River from Lake Secession to the Russell Dam. Completed in 1983 under wise Federal Legislation requiring a 300-foot buffer of public lands that excludes development, there are no visible human structures along the shoreline with the exception of those at public recreational areas leased to Georgia and South Carolina by the U.S. Army Corps of Engineers. The topology of the surrounding land is gentle rolling hills and the lake has many long, wide bays that can lead to 0.25 to 2.5 mile crossings. Sunken forests and islands provide an occasional change in scenery from the open expanse of lake and modest hills covered in forests. The lake is a very popular fishing venue and motorboat traffic can be heavy at times. Serving as a storage reservoir between Lakes Hartwell and Thurmond, the lake level never varies by more than four feet.

My wife Janice and I arose at 4:00 a.m. Saturday morning to pack for the trip, and then drove to the Smith McGee Boat Ramp off of Route 181 at the northern end of Lake Russell arriving around 7:00 a.m. Brian showed up 15-minutes later, and he and I entered the water around 7:40 a.m., while Janice drove to Calhoun Falls State Park to set up camp. As we began paddling, the temperature was cool, the humidity high, and the fog was so thick we could only see a few feet in front of the kayaks, and hearing motorboats moving up and down the river we played it safe by staying close to the shoreline. After about a mile, we came to the end of a string of islands and we felt safe crossing a modest bay since the fog had begun to lift and we could see all the way across to the opposite shore. Three motorboats passed us at high speed, while a fourth was trolling in the shallow bay.

After paddling nearly an hour, we passed the Mountain View boat ramp (2.9 miles; 34.2864N, 82.7693W) and angled our heading southwest toward Seb Craft Island passing through a sunken forest on the western side of the island. The tops of dead trees poking through the surface provided an obstacle course and an opportunity to playfully maneuver the kayaks with sweep strokes and edging. Brian was inspired to see, in the dead branching spires poking through the water and clothed in a pensive gray, the enchanted world of Salvador Dali. Emerging from the sunken forest, we paddled past the Sanders Ferry Boat Ramp (34.2564N, 82.7408W) and beneath the bridge carrying Route 184 over the Savannah River. 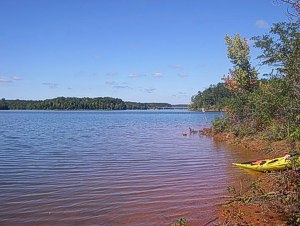 Paddling ahead of Brian, I angled toward a small island approximately a mile south of the bridge where we landed to stretch our legs and backs after a 6.5-mile paddle (2.38 hrs, 2.7 mph; 34.2412N, 82.7417W). We stretched, and walked around the small island before entering the kayaks again around 10:15 a.m.

The temperature had risen and in the absence of a headwind it was quite warm, so an occasional small gentle breeze in our faces was very welcome indeed. Paddling at an easy pace we passed the Gregg Shoals Boat Ramp (34.2138N, 82.7403W) and continued down the middle of the lake on a long crossing heading toward an island at the mouth of Allen Creek. Approaching the island, we saw a small mammal that was probably a muskrat, and at the next inlet headed due east to reach the Harpers Ferry Boat Ramp (34.1618N, 82.7135W) and 13-miles of paddling behind us. After landing at the concrete ramp, Janice arrived within 10 minutes and we ate lunch in the shade of pine trees. I tried to snooze for 10 minutes or so while Janice and Brian finished their lunch and then helped load Brians kayak onto my truck for the shuttle back to his car. Janice and Brian would then drive to Calhoun Falls State Park, while I paddled the remaining 8-miles.

Entering the water around 1:16 p.m., I felt mild fatigue that was enhanced by the warm summer heat. Given my fatigue and the mid-day heat, I abandoned my plan to minimize the crossing distances and simply paddled down the middle of the lake several hundred yards from shore. Angling toward the Georgia shoreline, I again saw five to six small mammals swimming in the water. Since they did not slap their tails on the water or swim like beavers, they were probably muskrats. Upon reaching the Georgia shoreline, I landed and lay on the trunk of a fallen pine tree to rest and sooth my aching back. After about 15 minutes, I again entered the water and paddled toward channel marker 38 on the SC shore. At this point, the paddle toward channel markers 30 and 1 near the southern end of the lake became a chore, as the distance seemed much longer than I had anticipated. I used a cadence of paddle-rest-paddle-rest so as to maintain a steady speed and address my fatigue and the afternoon heat.

Upon reaching channel marker 30 and then 1, I could see the eastern arm of the lake, but was not sure where the campsite was. Having plotted a course heading of 42 degrees from a map of the lake, I set the kayak to that heading, which led to a mid-point between two inlets. Tired and unsure of which one to choose, I pull out the GPS unit, which pointed to the first cove. Reaching the midpoint of the channel I could see that the first cove had a fishing dock, which I had not seen from the campsite on a scouting trip. Realizing that the second cove angled behind the first, I headed there and soon saw the campsite after rounding the point. Barking to announce my arrival, Brian came down to the shore with camera in hand, while Janice began preparing dinner. The strategically chosen campsite allowed me to paddle right up to a set of steps made of railroad ties leading directly to our camp. I set up my hammock, rested for a while and then we feasted on rib-eye steak, diced red potatoes, corn-on-the-cob, salad and very cold sodas. Brian was far more impressed with Janice's wilderness cooking than the kayaking experience.

A park campsite provided the luxury of hot showers, which soothed my aching muscles and wiped away the grimy sweat of a long day's paddle (21 miles with 7 hours of paddling). I retired to the hammock beneath the stars, while Janice enjoyed the army cot inside the tent. The chill of the morning air through the bottom of the nylon hammock forced me to seek additional clothing around 3 in the morning. We awoke around 7:00 a.m., prepared a breakfast of eggs, bacon, and cantaloupe and then I help Janice pack some of the gear and supplies before heading out on the last leg of the trip from Calhoun Falls to Lowndesville. 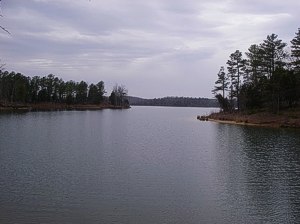 Leaving the campsite around 10:30 a.m. Sunday morning, the day was chilly with 9-mph head winds as I headed north for the eight-mile journey. Unfamiliar with this section of the lake and its large and wide bays, I relied on a marine compass, laminated Google Earth images, binoculars, channel markers, and boat traffic. The latter were often misleading as fishing boats came from isolated recesses of the large bays. Although the heading was due north, the channel meandered and was difficult to find sitting in the middle of a large bay. I soon settled into a pattern of looking for channel markers through the binoculars (green squares for port-side and red triangles for starboard heading up river), checking the compass, which rarely read 0 degrees due to the meandering channel, and double checking the Google Earth images upon which I had marked the location of several numbered channel markers. After learning to trust the compass and channel markers instead of my error prone perceptions, I was able to paddle the shortest distances between points and soon recognized an island (channel marker 32, 34.1639N, 82.6286W) I had visited two years before paddling from the north. With the wind and navigational challenges, I arrived 30 minutes late at the Lowndesville Landing and knew that Janice had probably gone to look for another ramp. Within ten minutes, I heard squealing wheels and saw the fast moving truck with Janice yelling, "I didn't know where you were when you didn't show up on time." There were of course no bars on the cell phones.

We loaded the kayak and gear onto the truck and as we drove away I heard this tale, which I offer with slight embellishment:

Arriving at the ramp around the agreed upon time of 12:30 p.m. and not finding me there, Janice feared she was at the wrong location and drove to the General Store in Lowndesville to ask for information. The woman behind the counter knew little about the ramps and referred her to an older gentleman. Relaying her predicament, Janice said, "My husband is kayaking from Calhoun Falls to Lowndesville and he is not at the ramp. Is there another ramp in Lowndesville?" Now I imagined an older gentleman in bib-overalls, straw hat, corncob pipe, sitting in a rocking chair beside a yellow dog. The man asked, "What is a kayak?"
"It's like a canoe, but lower to the water and they use a double bladed paddle", Janice replied.
Thoughtfully, the man pondered the dilemma and said, "You say he's coming from Calhoun Falls to Lowndesville? In a boat? Without a motor? Sounds like a damn fool Yankee to me. There's only one ramp and he probably hasn't arrived yet. Go back and wait for him."

I soon fell asleep dreaming of the 29-mile paddle, the gourmet dinner, sleeping beneath the stars, the wonderful shore support beyond the call of duty, and all my foolish pleasures, while Janice drove us home.

Calhoun Falls State Park has a Park Store, Marina and campgrounds with tent sites beside the water, RV sites, and shower and bathroom facilities. All campsites require a two-day stay with reservations, although a one-day purchase is available on a first come first serve basis.

The boat ramps on Lake Russell have no access fees.

From Clemson, take US 76 south to SC 187. Turn right onto SC 187 and follow it to the intersection with SC 181. At the T-intersection take a right onto 181/187. Follow 181 to the Smith McGee Boat Ramp (a.k.a. Sara Simpson Boat Ramp), which you reach by turning left onto Sarah Simpson Road just before 181 crosses the Savannah River. From Anderson follow SC 187 to the intersection with SC 181 and then proceed as described above.

Google Earth (a virtual tour for planning a trip) provided the coordinates given above.