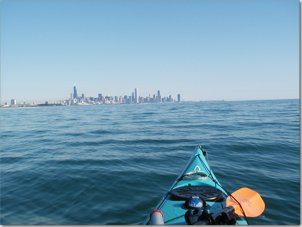 There are many public beaches along the shores of Lake Michigan in the Chicago area. Thanks to the park district that is now friendly to kayakers, all beaches are open to launching/landing at the far ends of each. I have been launching from Jackson Park beach (directly across from the Museum of Science & Industry) for several years. In the early years launching was either late at night or very early in the morning before lifeguards arrived. It was either very early in the season or late in the season, after the beaches were closed or one always risked the chance of racing against a protesting lifeguard. But thankfully, that is now a thing of the past. Jackson park beach is best launched from the far north end of the beach. A kayak cart is almost required if you don't want to make several trips. There is a public biking/running sidewalk which runs north up past through the city, one can cart his kayak from the parking lot to the north end of the beach with ease. It is about an 1/8 mile, Jackson being one of the longer beaches.

Launching from the beach, the kayaker has several options. He can immediately enter the Jackson Park lagoon area which is at the north end of the beach or, paddling around the break-water pier, paddle past the coast guard station and enter the yacht club harbor to sight see the boats. Further south, about 4 miles, is Rainbow Park, which is excellent surfing when the prevailing winds are out of the north/east.

But my day trip took me north toward Adler Planetarium, about 10 miles from the Jackson Park beach. Burnham Harbor is there but they charge boat entry fees and entering and exiting the harbor is extremely dangerous when there is boat traffic. Confused water currents could easily was a beginner up against the steel pilings on either side of the entrance or worse yet, roll them over. The under currents there are not to be taken lightly.

I would suggest when leaving Jackson Park beach to head directly out into the lake. Be cautious of boat traffic. Heading north past the lagoon entrance is 57th Street beach. I would not launch or land at this beach. Presently there are construction barges and tugs, which should be given wide berth. The north end of 57th street beach juts out into lake. Once past this point, there are no landing sights for 10 miles. The 49th St beach is closed due to breakwater construction.

I found the further out into the lake I was, the better time I made, something about that shortest distance between to points. It is easy to stay the course as there is a red blinking beacon up near Oak Street beach, five miles north of the Planetarium. For the most part, the adventure of this paddle is watching the high-rise skyline slowly draw closer and closer. Early morning paddles are usually without boat traffic which starts to pick up around 10AM on weekends.

It must be pointed out that Lake Michigan is probably the hardest fresh water lake to paddle. Currents are constantly changing and what was glass two hours earlier can suddenly be 4 foot breakers with dual currents, especially if you are too close to the piling shores which cast reflecting waves. It took me little more than 2 hours to reach the planetarium from Jackson Park. Never having paddled this far before, once having turned into Burnham Harbor for lunch, I did not know of the little 12th Street beach. It is a small beach no more than 2-300 yrds in length. The northern end is the south embankment of the planetarium and should not be used as a landing site. The southern end of the beach has less sand, therefore few people during peak activity. Again, a caddie is a wise investment though here there are no paved sidewalks running down to the beach. Yet it would make the transition from parking lot, around and through the fenced off beach, down to the changing house much easier.

Once reaching the 12th Street beach, I landed at the southern end of the beach for lunch. There are bathroom facilities here if needed and generally a very nice little rest spot. A note of caution, one would have to be very careful launching from this beach when the waves are nearing 3 or 4 feet. About 100 yards off from the beach, there two double row timber breakers. Today they were about 4 feet below me but they took me by complete surprise, submerged from view until I was directly on top of them. This would not be a good launching or landing site when larger waves are being produced.

On the north side of the planetarium, one can head west in toward the city, entering Chicago Harbor behind the breakwaters. I would suggest not entering the south entrance either during boat traffic hours or when the surf high. Enter the center entrance which is directly opposite of Buckingham Fountain. This is a harbor which is primarily used by sailboats, however on the far north end, many large yachts are tied up, some as large as 90 feet.

Today my paddle ended with my quiet tour through Chicago Harbor which was largely empty due to a sailing event taking place a few miles off shore. Heading back south, I once again kept a fair distance between me and the shoreline, at times maybe a mile or more. It has always been my experience that paddling south requires much more attention that paddling north as the waves are using coming out of either the north or the east. Again I experienced the late afternoon confusion of water currents. At times the water was reasonably calm, no more than 2-foot waves which were for the most part headed due south. But not infrequently, 4-foot waves would suddenly appear out of the east or worse yet, directly out of the north, coming up on me without warning. It is best to turn and look behind you with some frequency while paddling this lake. Either boat traffic or rogue waves can be upon you with little or no notice.

Arriving back at the Jackson Park beach at 2:30, it had taken me five hours to paddle from the beach up to and around the planetarium. During summer months, Jackson Park beach offers an excellent place to play. A sand bottom is no more than a few feet deep for a fair distance out into the lake. It makes for an excellent place for practicing rolls or wet exits and entrances.

Illinois provides precious few places for large water kayaking. Fox Lake is a high powerboat lake and should be avoided during holidays and weekends. Clinton, Shelbyville, Carlyle and Rend lakes are all nice lakes to begin one's training and exploration. But for a Chicagoland sea kayaker, there are really no alternatives to Lake Michigan in the immediate vicinity. For the novice, extreme caution therefore needs to taken before venturing further out into the lake or on longer excursions. Planning is a must both for weather conditions and knowing where the next available landing is. Lake boaters rarely encounter kayakers therefore they don't look for them. Boats on Michigan versus boats on, say the inland lakes, are much larger for the most part and produce much larger wakes, especially when wind is prevalent. Ted Turner, coming from an ocean yachting championship, once dismissed the challenge of Lake Michigan during an Mackinaw yacht race. That year winds were exceptional and ocean-touting Turner soon changed his opinion of the lake. So anyone venturing out into Lake Michigan, it is best not to do it alone, and always let someone know where you are launching from and where you are headed. But one quiet waters, the sights of the city are well worth the effort.

You are in the heart of the city. Everything is within walking distance.

Parking fees could be as little as a parking meter(which have to be fed every 2-3 hrs) , or the parking lot which is $12/day. Three museums in the immediate area, Field Museum, Shedd Aquarium and Adler Planetarium plus the 12th St. beach. Make a day of it.

Lake Shore Drive, immediately east of the Field Museum, pull on to Salidarity Drive, parking either on the street or the Northerly Island Park parking lot. ($12/day)